The Art of Always Being Right 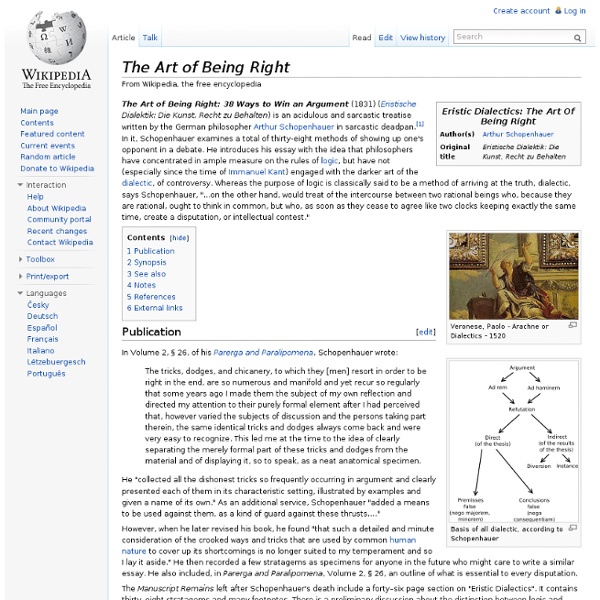 The Art of Being Right: 38 Ways to Win an Argument (1831) (Eristische Dialektik: Die Kunst, Recht zu Behalten) is an acidulous and sarcastic treatise written by the German philosopher Arthur Schopenhauer in sarcastic deadpan.[1] In it, Schopenhauer examines a total of thirty-eight methods of showing up one's opponent in a debate. He introduces his essay with the idea that philosophers have concentrated in ample measure on the rules of logic, but have not (especially since the time of Immanuel Kant) engaged with the darker art of the dialectic, of controversy. Whereas the purpose of logic is classically said to be a method of arriving at the truth, dialectic, says Schopenhauer, "...on the other hand, would treat of the intercourse between two rational beings who, because they are rational, ought to think in common, but who, as soon as they cease to agree like two clocks keeping exactly the same time, create a disputation, or intellectual contest." Publication[edit] A. Synopsis[edit]

Wikileaks' Julian Assange and Conspiracy Theories By Michael Collins "I'm constantly annoyed that people are distracted by false conspiracies such as 9/11, when all around we provide evidence of real conspiracies, for war or mass financial fraud." Julian Asange, Wikileaks, July 19 (Image right) John Young was one of the co-founders of Wikileaks. He quickly left the organization in disagreement with some of its policies (CNET). Young was a natural choice for Wikileaks since he has operated a leak website, CRYPTOME, since 1996. "These essays on conspiracies by Julian Assange (me@iq.org) were retrieved today from his website iq.org. The essay titles indicate an entirely different take on conspiracies than that indicated by Assange in his 9/11 comments. State and Terrorist Conspiracies me @ iq.org November 10, 2006 Conspiracy as Governance me @ iq.org December 3, 2006 In the second essay, Conspiracy as Governance, Assange outlines the centrality of conspiracies to maintaining elites. "Attacks on conspiratorial cognitive ability.

Greek and Roman Mythology About the Course Myths are traditional stories that have endured over a long time. Some of them have to do with events of great importance, such as the founding of a nation. Others tell the stories of great heroes and heroines and their exploits and courage in the face of adversity. Still others are simple tales about otherwise unremarkable people who get into trouble or do some great deed. What are we to make of all these tales, and why do people seem to like to hear them? Course Syllabus Week 1: Homer, epic poetry, and Trojan legends Week 2: Heroes and suffering Week 3: This World and other ones Week 4: Identity and signs Week 5: Gods and humans Week 6: Religion and ritual Week 7: Justice Week 8: Unstable selves Week 9: Writing myth in history Week 10: From myths to mythology Recommended Background No special background is needed other than the willingness and ability to synthesize complex texts and theoretical material. In-course Textbooks Suggested Readings Greek Tragedies, Vol.

The Self-Attribution Fallacy Intelligence? Talent? No, the ultra-rich got to where they are through luck and brutality. By George Monbiot. Published in the Guardian 8th November 2011 If wealth was the inevitable result of hard work and enterprise, every woman in Africa would be a millionaire. The findings of the psychologist Daniel Kahneman, winner of a Nobel economics prize, are devastating to the beliefs that financial high-fliers entertain about themselves(1). Such results have been widely replicated. So much for the financial sector and its super-educated analysts. In a study published by the journal Psychology, Crime and Law, Belinda Board and Katarina Fritzon tested 39 senior managers and chief executives from leading British businesses(3). The psychopathic traits on which the bosses scored so highly, Board and Fritzon point out, closely resemble the characteristics that companies look for. This is not to suggest that all executives are psychopaths. This is now changing. It felt like history being made. 3. 4.

Rhetoric Painting depicting a lecture in a knight academy, painted by Pieter Isaacsz or Reinhold Timm for Rosenborg Castle as part of a series of seven paintings depicting the seven independent arts. This painting illustrates rhetorics. From Ancient Greece to the late 19th century, it was a central part of Western education, filling the need to train public speakers and writers to move audiences to action with arguments.[4] The word is derived from the Greek ῥητορικός (rhētorikós), "oratorical",[5] from ῥήτωρ (rhḗtōr), "public speaker",[6] related to ῥῆμα (rhêma), "that which is said or spoken, word, saying",[7] and ultimately derived from the verb ἐρῶ (erō), "say, speak".[8] Uses of rhetoric[edit] Scope of rhetoric[edit] Scholars have debated the scope of rhetoric since ancient times. Because the ancient Greeks highly valued public political participation, rhetoric emerged as a crucial tool to influence politics. However, since the time of Aristotle, logic has changed.

Famous Novelists on Symbolism in Their Work and Whether It Was Intentional Eric Carle's bright, beloved children's classic about an insatiable caterpillar has been collecting awards—and fans—since it was first published in 1969. Here are a few things you might not know about The Very Hungry Caterpillar. 1. Eric Carle was born in Syracuse, New York, on June 25, 1929. The author has since speculated that he was drawn to the chunky, vibrant colors of painted tissue paper collage in part as reaction to the grimness of his childhood. 2. Herr Kraus, Carle’s high school art teacher, recognized his young pupil’s potential and risked his livelihood for the opportunity to foster it. "I didn't have the slightest idea that something like that existed, because I was used to art being flag-waving, gun-toting Aryans—super-realistic Aryan farmers, the women with their brute arms,” Carle said. 3. The war didn't exactly endear Carle to Europe, and he longed to return to America. "I wasn't thinking of books or anything like that," Carle told The Guardian. 4. 5. 6. 7. 8. 9. 10.

Plot, Theme, the Narrative Arc, and Narrative Patterns In the world of fiction, just as in the world of your life, events occur. In life, people often try to determine what events mean in their own life and in the life of others. In fiction, authors will create meaning by introducing conflicts in the life of a character. The way a character responds to these conflicts is part of what gives a story meaning. Understanding plot, conflicts, structure, and their relationship will help a reader understand the meaning in a story. Plot is not just what happens in a story. Similarly, the plot in a film is not just what happens. The pattern for narrative was largely handed down from the Greek tradition in drama. Exposition In section one of a narrative, viewers are exposed to information that will later be necessary for them to have if they are to understand the unfolding story. Characters: The lead character in the narrative — the character who faces the conflict — is called the protagonist. Rising Action Resolution

Fallacies Dr. Michael C. Labossiere, the author of a Macintosh tutorial named Fallacy Tutorial Pro 3.0, has kindly agreed to allow the text of his work to appear on the Nizkor site, as a Nizkor Feature. Other sites that list and explain fallacies include: Constructing a Logical Argument Description of Fallacies In order to understand what a fallacy is, one must understand what an argument is. There are two main types of arguments: deductive and inductive. A fallacy is, very generally, an error in reasoning.

Media manipulation Media manipulation is a series of related techniques in which partisans create an image or argument that favours their particular interests. Such tactics may include the use of logical fallacies and propaganda techniques, and often involve the suppression of information or points of view by crowding them out, by inducing other people or groups of people to stop listening to certain arguments, or by simply diverting attention elsewhere. In Propaganda: The Formation of Men's Attitudes, Jacques Ellul writes that public opinion can only express itself through channels which are provided by the mass media of communication-without which there could be no propaganda.[1] It is used within public relations, propaganda, marketing, etc. While the objective for each context is quite different, the broad techniques are often similar. As illustrated below, many of the more modern mass media manipulation methods are types of distraction, on the assumption that the public has a limited attention span.

Teaching Shakespeare's Julius Caesar: Common Core-Style For the first eight years of my teaching career, my Shakespare daily lesson plans went something like this: "Good morning! Turn to Act II Scene 1 on page 234. I'm going to push play on the CD, let's listen to a few lines..." Once in awhile, I would have the students act out a scene or two... but that usually led to monotone recitations and awkward moments helping students pronounce words. I think many people would relate to these methods. We were studying the play a mile wide and an inch deep. This year, my English II colleague Blake Revelle and I decided to try something completely different when we taught Julius Caesar. We felt like the answer was clear: In 10 years, it will be far more important for our students to know how to annotate, analyze and explain a complex text they have to read for work or college, rather than be able to answer plot questions or create a poster with all of the characters. Our mantra became, "We will teach an inch-wide and a mile-deep." Monday 1. 2. 3. 4. 5.

Fear mongering Fear mongering (or scaremongering or scare tactics) is the use of fear to influence the opinions and actions of others towards some specific end. The feared object or subject is sometimes exaggerated, and the pattern of fear mongering is usually one of repetition, in order to continuously reinforce the intended effects of this tactic, sometimes in the form of a vicious circle.[citation needed] Examples[edit] Campaign advertisements[edit] "Daisy" advertisement As the firestorm rages, a voice-over from President Johnson states, "These are the stakes! Another fear-mongering classic occurred during the 1988 presidential campaign ad featuring a frightening mug-shot of convict Willie Horton. Product advertisements[edit] See also[edit] References[edit]

MLA Formatting and Style Guide Summary: MLA (Modern Language Association) style is most commonly used to write papers and cite sources within the liberal arts and humanities. This resource, updated to reflect the MLA Handbook for Writers of Research Papers (7th ed.) and the MLA Style Manual and Guide to Scholarly Publishing (3rd ed.), offers examples for the general format of MLA research papers, in-text citations, endnotes/footnotes, and the Works Cited page. Contributors:Tony Russell, Allen Brizee, Elizabeth Angeli, Russell Keck, Joshua M. Paiz, Purdue OWL StaffLast Edited: 2012-05-09 07:17:57 Please use the example at the bottom of this page to cite the Purdue OWL in MLA. To see a side-by-side comparison of the three most widely used citation styles, including a chart of all MLA citation guidelines, see the Citation Style Chart. You can also watch our MLA vidcast series on the Purdue OWL YouTube Channel. General Format MLA style specifies guidelines for formatting manuscripts and using the English language in writing.