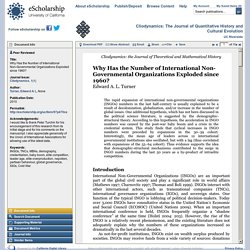 Journal Issue: Cliodynamics, 1(1) Author: Turner, Edward A L, None Publication Date: Permalink: Acknowledgements: I would like to thank Peter Turchin for his encouragement of this research from its initial stage and for his comments on the manuscript. Keywords: Only rights can stop wrongs: A critical assessment of anti-trafficking strategies. By Marjan Wijers and Marieke van Doorninck. Paper presented at EU/IOM STOP European Conference on Preventing and Combating Trafficking in Human Beings — A Global Challenge for the 21st Century. 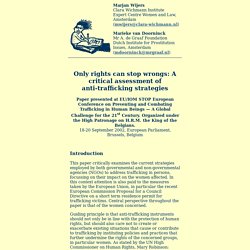 Organized under the High Patronage on H.R.M. the King of the Belgians. 18-20 September 2002, European Parliament, Brussels, Belgium Introduction This paper critically examines the current strategies employed by both governmental and non-governmental agencies (NGOs) to address trafficking in persons, focussing on their impact on the women affected. In this context attention is also paid to the measures taken by the European Union, in particular the recent European Commission Proposal for a Council Directive on a short term residence permit for trafficking victims. Ouch! Western feminists' 'wounded attachment' to the 'third world prostitute'. By Jo Doezema. 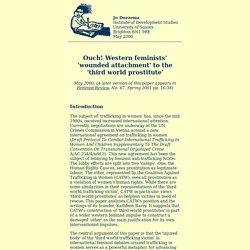 (A later version of this paper appears in Feminist Review, No. 67, Spring 2001 pp. 16-38) Introduction The subject of 'trafficking in women' has, since the mid 1980s, received increased international attention. Currently, negotiations are underway at the UN Crimes Commission in Vienna around a new international agreement on trafficking in women (Draft Protocol To Combat International Trafficking In Women And Children Supplementary To The Draft Convention On Transnational Organized Crime A/AC.254/4/add.3). Who gets to choose? Coercion, consent and the UN Trafficking Protocol. By Jo Doezema. Archives. Human trafficking is now associated, and sometimes used interchangeably, with slavery and forced labour. 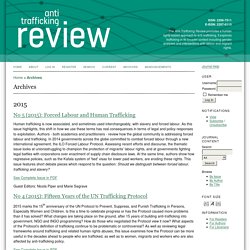 As this issue highlights, this shift in how we use these terms has real consequences in terms of legal and policy responses to exploitation. Authors - both academics and practitioners - review how the global community is addressing forced labour and trafficking. In 2014 governments across the globe committed to combat forced labour through a new international agreement, the ILO Forced Labour Protocol. Assessing recent efforts and discourse, the thematic issue looks at unionsstruggling to champion the protection of migrants' labour rights, and at governments fighting legal battles with corporations over enactment of supply chain disclosure laws. At the same time, authors show how regressive policies, such as the Kafala system of 'tied' visas for lower paid workers, are eroding these rights. 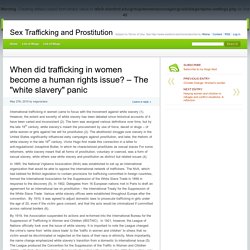 However, the extent and severity of white slavery has been debated since historical accounts of it have been varied and inconsistent (2). The term was assigned various definitions over time, but by the late 19th century, white slavery’s meant the procurement by use of force, deceit or drugs – of white women or girls against her will for prostitution (2). The abolitionist struggle over slavery in the United States significantly influenced early campaigns against prostitution, and later, the rhetoric of white slavery in the late 19th century.

Victor Hugo first made this connection in a letter to anti-regulationist Josephine Butler, in which he characterized prostitutes as sexual slaves For some reformers, white slavery meant that all forms of prostitution, voluntary or coerced, was a form of sexual slavery, while others saw white slavery and prostitution as distinct but related issues (4). 1. 2. Purity, Victimhood and Agency: Fifteen years of the UN Trafficking Protocol. DOI: 10.14197/atr.20121544 Marjan Wijers Abstract When the women’s movement reverted back to the nineteenth-century Victorian concept of ‘trafficking in women’ to address abuses of migrant women in the sex industry, it unwittingly adopted not only a highly morally biased concept—dividing women into innocent victims in need of rescue and guilty ones who can be abused with impunity—but also one with racist and nationalistic overtones. 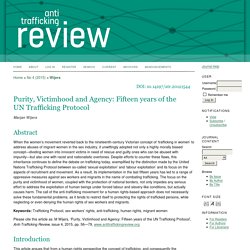 Articles & Reports about Modern Slavery and Trafficking - Kevin Bales. International Organization for Migration. Human Trafficking Timeline. Human trafficking and exploitation has been in existance across the globe for thousands of years. 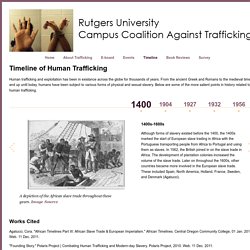 From the ancient Greek and Romans to the medieval times, and up until today, humans have been subject to various forms of physical and sexual slavery. Below are some of the more salient points in history related to human trafficking. A depiction of the African slave trade throughout these years. Image Source 1400s-1600s Although forms of slavery existed before the 1400, the 1400s marked the start of European slave trading in Africa with the Portuguese transporting people from Africa to Portugal and using them as slaves. In 1562, the British joined in on the slave trade in Africa. A candlelight vigil held in AZ on National Human Trafficking Day. Agatucci, Cora. "Founding Story. " "Fourth World Conference on Women, Beijing 1995. " Kangaspunta, Kristiina. Kloer, Amanda. "Largest-ever Human Trafficking Ring Busted - The China Post.