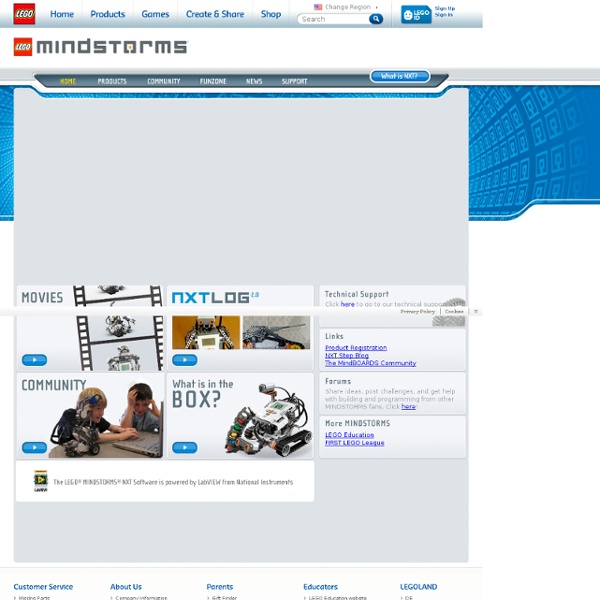 LEGO MINDSTORMS Internals A note to the reader: some of these links may be unreachable. I'm leaving them here if only to give credit where credit is due. Newer items are added to the bottom of each section, so look there for news. The LEGO® MINDSTORMS(tm) (#9719) product is a robot-kit-in-a-box. It consists of a computer module (the "RCX(tm)"), and an inventory of many TECHNICS(tm) parts. It appears to be a productized version of the MIT Programmable Brick, as the following table will show you. The LEGO-Robotics Mailing List A group of people have figured out how to talk to the RCX from operating systems unsupported by The LEGO Group. This group of people gathers at the lego-robotics mailing list. General MINDSTORMS Info You can buy the MINDSTORMS RIS (Robotics Invention System) at the stores listed below (presuming they have it in stock), and many fine toy outlets. Places to buy MINDSTORMS (not a comprehensive list): Erik Brok has an introduction to programming with MINDSTORMS page. Kin W. Books Notes Patrick R. legOS

Kodu Kodu is a new visual programming language made specifically for creating games. It is designed to be accessible for children and enjoyable for anyone. The programming environment runs on the Xbox, allowing rapid design iteration using only a game controller for input. Programming as a Creative Medium The core of the Kodu project is the programming user interface. The Kodu language is designed specifically for game development and provides specialized primitives derived from gaming scenarios. Key Features Kodu provides an end-to-end creative environment for designing, building, and playing your own new games. High-level language incorporates real-world primitives: collision, color, visionUses Xbox 360 Game Controller for input — no keyboard requiredRuns on XBox 360 and PCInteractive terrain editorBridge and path builderTerrain editor - create worlds of arbitrary shape and size20 different characters with different abilities

NXT Programming Software NXT Programming Software These are different ways of writing programs that will execute on the LEGO NXT brick. This list doesn't include all features, but should include enough information to provide a good starting point for you to figure out which software best suits your needs. Notes (1) RoboLab and RobotC both use firmware that comes Standard with some LEGO software Software Suggestions If you're looking here to find the "best" software, it's not that easy. NXT Off-Brick controllers (Remote Controls) These are different types of "remote control" systems for the NXT. (1) RobotC uses firmware that comes Standard with some LEGO software (2) LEGO's Mobile Application can send messages to a program running on an NXT Other Team Hassenplug NXT stuff

RIA - Robotics Online - Your #1 Online Resource for Industrial Robotics - Powered by Robotic Industries Association Welcome to the MindBOARDS website! Microsoft Robotics Studio and Lego Mindstorms NXT | Coding4Fun Articles The Lego Mindstorms NXT kit is an amazing upgrade to the original Lego Mindstorms product. While the building blocks are not the traditional plastic stud blocks everyone is used to, the new construction parts allow for some very complex designs. Additionally, Microsoft Robotics Studio supports the Lego NXT kit right out of the box, so it's quite easy to get up and going using MSRS with the Lego kit to start coding a robot in C# or VB.NET. With that in mind, this article will demonstrate how to use MSRS with the simple TriBot robot that can be easily built using the instructions included in the Lego NXT kit. LegoNXT TriBot Building The instructions for building the TriBot are located in the LegoNXT kit. Plug the wires into brick as follows, looking at the front of the bot so the LCD screen is facing you: A - Middle B - Left C - Right Additionally, I added the push button sensor to the front of the TriBot which is plugged into port 1 at the bottom. LegoNXT and Bluetooth Configuration Bio