Christian Churches: the “Master Race” and “American Exceptionalism” The phrase “Good Germans” is a derogatory reference to citizens of Nazi Germany, almost all of whom were Christians — some 20 million Roman Catholics and 40 million Protestants. 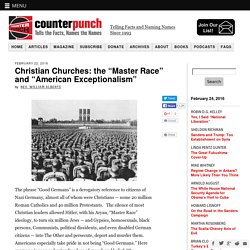 The silence of most Christian leaders allowed Hitler, with his Aryan, “Master Race” ideology, to turn six million Jews — and Gypsies, homosexuals, black persons, Communists, political dissidents, and even disabled German citizens — into The Other and persecute, deport and murder them. Americans especially take pride in not being “Good Germans.” "Axis Sally: The American Voice of Nazi Germany" by Richard Lucas. (Photo: Mildred Gillars, better known to World War II Veterans as "Axis Sally" is interviewed by the press on her arrival at Bolling Field,Washington DC, to face charges of collaborating with the Nazis. 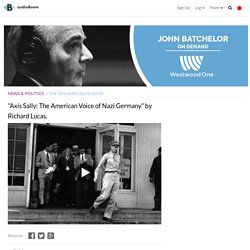 Her voice was beamed throughout the European fighting fronts, during German propaganda broadcasts. (National Archives). Interview: Ruta Sepetys, Author Of 'Salt To The Sea' The Wilhelm Gustloff sank after being hit by Russian torpedoes on Jan. 30, 1945. 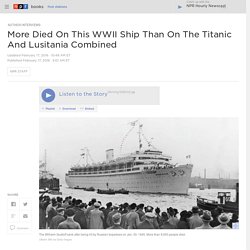 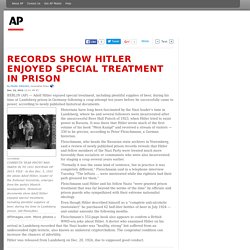 Uncredited CORRECTS YEAR PHOTO WAS TAKEN IN TO 1931 INSTEAD OF 2013- FILE - In this Dec. 5, 1931 file photo Adolf Hitler, leader of the National Socialists, emerges from the party's Munich headquarters. Historical documents show Adolf Hitler enjoyed special treatment, including plentiful supplies of beer, during his time in Landsberg prison. (AP Photo/file) Io9.gizmodo. 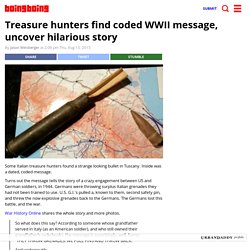 Inside was a dated, coded message. Turns out the message tells the story of a crazy engagement between US and German soldiers, in 1944. Germans were throwing surplus Italian grenades they had not been trained to use. U.S. G.I.' War History Online shares the whole story and more photos. So what does this say? A Nazi War Train Hauled the Biggest Gun Ever Made — War Is Boring. By JAMES SIMPSON War trains dominated combat for more than 100 years. 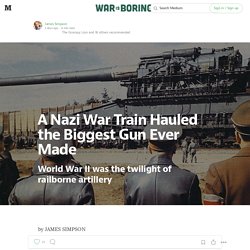 Massive rail-borne artillery shelled the enemy while trains unloaded troops and supplies. For a brief moment, the terrifying machines were the most powerful weapon on the battlefield. But technology advanced. Bunker where Emperor Hirohito recorded speech for Japan's surrender. Captivating pictures show the room where the historic speech announcing Japan's capitulation was made in 1945 Emperor Hirohito went into the bunker, dug into his palace compound in Tokyo, and recorded speech in two takes Young army officers stormed into the palace in a failed attempt to steal the records and block the surrender speech The 70th anniversary takes place on August 15, and official recording has now been made digital for world to hear By Elaine O'flynn For Mailonline Published: 12:50 GMT, 1 August 2015 | Updated: 05:05 GMT, 2 August 2015. 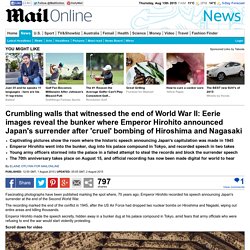 China and U.S.: What might have been 70 years after V-J Day. A crowd marches through New York’s Chinatown to celebrate the end of World War II, V-J Day, waving American and Chinese flags on Aug. 1, 1945. 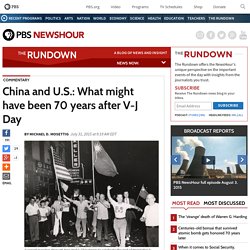 Photo by Weegee (Arthur Fellig)/International Center of Photography/Getty Images As the 70th anniversary of V-J Day approaches, the United States and Asia are facing another reminder that history may not repeat itself but often it seems to come around full circle. Seventy years after the end of World War II in Asia, once again the top ranks of the U.S. government and the universe of academia and think tanks are in yet another debate about the future relationship between the United States and China.

While the 1945 surrender of Japan to the allies will be widely observed on Aug. 14-15 in the United States and most of Asia, few Americans remember that soon after, 50,000 U.S. ‘Target Tokyo’: Doolittle and the raid that avenged Pearl Harbor. James Scott’s “Target Tokyo” is a gripping history of the daring retaliatory airstrike mounted by U.S. 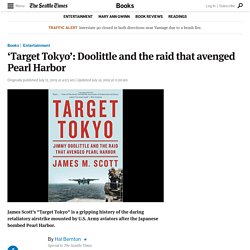 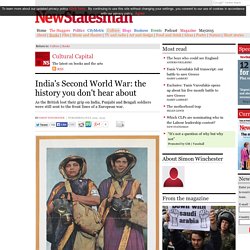 Battle of the Philippine Sea: Facts you should definitely know about the Nava... The Battle of the Philippine Sea was a significant naval battle during the World War II between the Japanese combined fleet or the Imperial Japanese Army (IJN) and the U.S. 5th fleet. The two day battle took place from June 19-20, 1944 on the Philippine Sea and was conquered by the US fleet defeating the Japanese navy decisively. Let us look at some of the important aspects about the war: The main motive of the war was the Japanese army's attempt to hold the Marianas Islands. Heinrich Himmler, Reichsführer SS. The Convoys That Helped Save Britain During The Second World War. During the Second World War, Britain depended on vital supplies of food, equipment and raw materials from overseas, notably from North America and the Empire.

These goods were transported in thousands of merchant ships, which were vulnerable to attack by German submarines (U-boats). As there were not enough warships to protect thousands of individual merchant ships, they were grouped into convoys with naval escorts, making them hard to find and difficult to attack. Merchant shipping was placed under Admiralty control on 26 August 1939, and the first convoy sailed on 2 September. Four days later, the first regular series of convoys began. Convoy FS1 – standing for Forth-Southbound – was tasked with protecting the coal supply routes along Britain’s east coast. Glogin?mobile=1&URI= The Vital Role Of Tanks In The Second World War. Britain had been first to use tanks on a mass scale during the First World War. But by the Second World War, it was German forces that had more fully integrated tanks into their fighting methods. Armoured warfare was to be a vital part of the fighting in the Second World War.

In the early years of the war, Germany held the initiative. German forces used Blitzkrieg tactics in France in 1940, making full use of the speed and armour of tanks to break through enemy defences. It was clear that German tank tactics had evolved during the inter-war period. Has India's contribution to WW2 been ignored? The numbers are staggering: up to three million Bengalis were killed by famine, more than half a million South Asian refugees fled Myanmar (formerly Burma), 2.3 million soldiers manned the Indian army and 89,000 of them died in military service. 12 Questions about WWII All Americans Should Be Able To Answer. The fascinating story of the alcoholic, womanizing German double agent who turned the tide of World War II.

According to a Tuesday article in the Asahi Shimbun, one of Japan's leading dailies, Yoshio Okudaira, the bookstore employee, found a signed 1938 letter from Nazi Germany's then Foreign Minister Joachim von Ribbentrop. It was a greeting card to a certain Richard Sorge, who at the time was posted in Japan as a reporter for a German newspaper. Ardennes 1944: Hitler’s Last Gamble by Antony Beevor review – a startlingly detailed account. How to Preserve America’s War Stories Before It’s Too Late. On June 19, 1970, Dennis Keith Martin, a U.S. Army Corporal stationed in Vietnam, wrote a letter to his grandparents. Dunkirk veterans gather in France to commemorate WWII evacuation. Remembering D-Day: GE and the Invasion That... By GE Reports staff. The Worst Fighting Was On The Eastern Front: World War II As The Soviets Experienced It.