This is a collection of resources related to the study of World War II and also the related research assignments.

The Kokoda Track. The Thai–Burma Railway and Hellfire Pass. Australia and the Second World War. The battle of the Bulge facts: Hitler’s final gamble. Nestling deep in the Ardennes, overlooked by hills and woods, Hotton is an unremarkable Belgian town, sitting astride the river Ourthe. 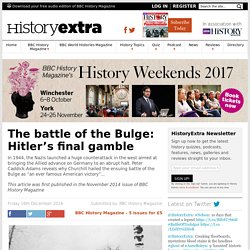 This sleepy crossroads community, with its church, stone farmhouses and wooden barns, still bears a close resemblance to the 1940s settlement, although the scattering of modern buildings indicate that vicious fighting once occurred here. Walk down the main street and you can picture the 5th Panzer Division racing through, on their way to the river Meuse during the Saturday afternoon of 11 May 1940. Clattering down the cobbles from the east – young, keen and scenting victory – the black-clad German tank men easily captured Hotton’s little bridge over the river Ourthe, despite attempts by Belgian pioneers to destroy it. At the same hour three miles south, other panzers belonging to a then obscure major-general named Erwin Rommel were splashing across a ford, at Beffe.

An American M-10 tank destroyer advances along an Ardennes forest road. Dead of winter. Siege of Tobruk. Men of the 2/13th Australian Infantry Battalion "digging in". 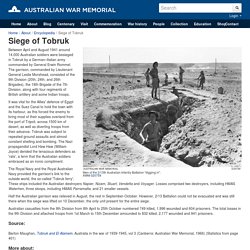 AWM 020759 Between April and August 1941 around 14,000 Australian soldiers were besieged in Tobruk by a German–Italian army commanded by General Erwin Rommel. Australian War Memorial. The Kokoda Trail was a path that linked Ower's Corner, approximately 40 km north-east of Port Moresby, and the small village of Wairopi, on the northern side of the Owen Stanley mountain range. 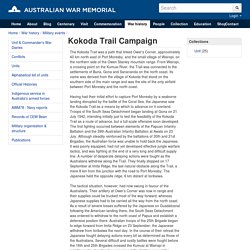 From Wairopi, a crossing point on the Kumusi River, the Trail was connected to the settlements of Buna, Gona and Sanananda on the north coast. Its name was derived from the village of Kokoda that stood on the southern side of the main range and was the site of the only airfield between Port Moresby and the north coast. Having had their initial effort to capture Port Moresby by a seaborne landing disrupted by the battle of the Coral Sea, the Japanese saw the Kokoda Trail as a means by which to advance on it overland. 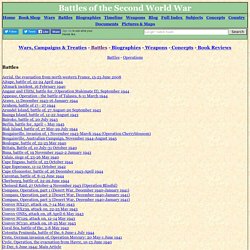 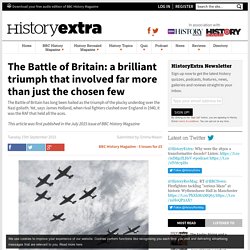 “One hundred and twenty plus approaching Warmwell from the south,” came the calm voice of the ground controller in the pilots’ ears. “Good luck, chaps.” Pilot Officer Roland ‘Bee’ Beamont swallowed hard and began desperately to scan the sky. They were over Lyme Regis and flying at around 12,000ft when Beamont saw them, still out to sea – what looked to him like a gigantic swarm of bees all revolving around each other in a fantastical spiral from around 8,000 to 14,000ft. As the Hurricanes drew closer, Beamont could see there were about 50 Stuka dive-bombers and two-engine Messerschmitt 110s above, and single-engine Me109s above them.

Band of brothers On that day, Beamont and his fellows in 87 Squadron were just 12 men taking on 120. It is, however, a myth, and one that, 75 years on, we should put to bed once and for all. Living in fear. Battle of Britain. Stalingrad: the crushing of the Reich. From its foundation in the mid‑16th century, the old fortress town at the confluence of the Tsaritsa and Volga rivers has had three identities. 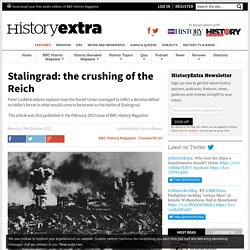 Originally called Tsaritsyn and today labelled Volgograd, it was known for a mere 36 years (1925–61) by the name with which it will be eternally associated – Stalingrad. iWonder - World War Two: History's most savage and devastating war. Battle of Britain - World War II. On June 17, 1940, the defeated French signed an armistice and quit World War II. 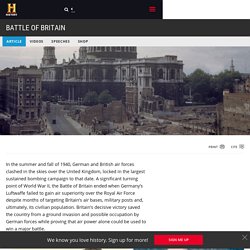 Britain now stood alone against the power of Germany’s military forces, which had conquered most of Western Europe in less than two months. But Prime Minister Winston Churchill rallied his stubborn people and outmaneuvered those politicians who wanted to negotiate with Adolf Hitler. But Britain’s success in continuing the war would very much depend on the RAF Fighter Command’s ability to thwart the Luftwaffe’s efforts to gain air superiority. This then would be the first all-air battle in history. History - World Wars: Hitler's Invasion of Russia in World War Two.