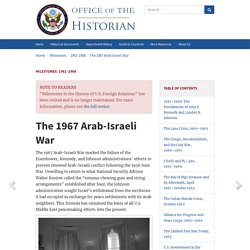 Unwilling to return to what National Security Advisor Walter Rostow called the “tenuous chewing gum and string arrangements” established after Suez, the Johnson administration sought Israel’s withdrawal from the territories it had occupied in exchange for peace settlements with its Arab neighbors. This formula has remained the basis of all U.S. Middle East peacemaking efforts into the present. President Lyndon Johnson and his advisors meet with Israeli Foreign Minister Abba Eban to discuss the developing crisis in the Middle East, May 26, 1967. (LBJ Library photo by Yoichi Okamoto) Www.jstor. Www.jstor. Www.jstor. Www.jstor. Www.jstor. J.ctt19qgf0x. The Seventh Day. In June, 2003, President Bush tried to discredit any critics who dared dispute his artfully twisted intelligence assessments of Iraq by slinging the worst name he could think of: “Revisionist historians is what I like to call them.” 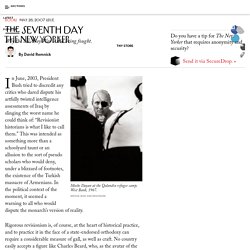 This was intended as something more than a schoolyard taunt or an allusion to the sort of pseudo scholars who would deny, under a blizzard of footnotes, the existence of the Turkish massacre of Armenians. In the political context of the moment, it seemed a warning to all who would dispute the monarch’s version of reality. Rigorous revisionism is, of course, at the heart of historical practice, and to practice it in the face of a state-endorsed orthodoxy can require a considerable measure of gall, as well as craft. “The Six-Day Miracle”: The 1967 War and How It Changed Israel - Association for Diplomatic Studies and TrainingAssociation for Diplomatic Studies and Training. “This is a fight for the homeland – it is either us or the Israelis…. 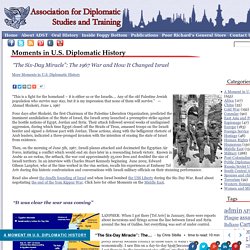 Any of the old Palestine Jewish population who survive may stay, but it is my impression that none of them will survive.” — Ahmad Shukeiri, June 1, 1967 Four days after Shukeiri, the first Chairman of the Palestine Liberation Organization, predicted the imminent annihilation of the State of Israel, the Israeli army launched a preemptive strike against the hostile nations of Egypt, Jordan and Syria. Their attack followed several weeks of undisguised aggression, during which time Egypt closed off the Straits of Tiran, amassed troops on the Israeli border and signed a defense pact with Jordan. War. The Six-Day War involved three distinct battlefronts, tied together by a shared desire on the part of the surrounding Arab states to eliminate Israel and erase the shame of their defeat 19 years earlier when they failed to destroy the nascent Jewish state. 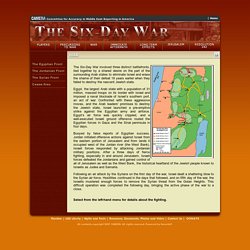 Egypt, the largest Arab state with a population of 31 million, massed troops on its border with Israel and imposed a naval blockade of Israel’s southern port, an act of war. Confronted with these aggressive moves, and the Arab leaders' promises to destroy the Jewish state, Israel launched a pre-emptive strike against the Egyptian army and airforce. Egypt’s air force was quickly crippled, and a well-executed Israeli ground offensive routed the Egyptian forces in Gaza and the Sinai peninsula in four days.

Buoyed by false reports of Egyptian success, Jordan initiated offensive actions against Israel from the eastern portion of Jerusalem and from lands it occupied west of the Jordan river (the West Bank). Background & Overview - Six-Day War. Israel consistently expressed a desire to negotiate with its neighbors. 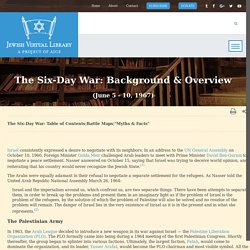 In an address to the UN General Assembly on October 10, 1960, Foreign Minister Golda Meir challenged Arab leaders to meet with Prime Minister David Ben-Gurion to negotiate a peace settlement. Nasser answered on October 15, saying that Israel was trying to deceive world opinion, and reiterating that his country would never recognize the Jewish State.(1) The Arabs were equally adamant in their refusal to negotiate a separate settlement for the refugees. As Nasser told the United Arab Republic National Assembly March 26, 1964: Israel and the imperialism around us, which confront us, are two separate things. The Palestinian Army In 1963, the Arab League decided to introduce a new weapon in its war against Israel — the Palestine Liberation Organization (PLO). The PLO’s belligerent rhetoric was matched by deeds.