War begins for Australia - World War I and Australia - Research guides at State Library of New South Wales. Australia was in the middle of a double-dissolution election when Britain declared war against Germany in August 1914. 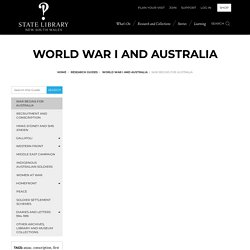 With Britain now at war, all dominions of the British Empire were also at war with Germany — including Australia. The Prime Minister, Joseph Cook as well as opposition leader, Andrew Fisher — who would win the election and become the Prime Minister — both pledged Australia’s full support. The campaign to recruit volunteers for the Australian Imperial Force began straightaway. Writing at Gallipoli. ‘How our fellows ever fought their way over these ravines and cliffs will ever remain a mystery to me,’ he wrote. 'Their tracks too were sadly marked by dead and wounded casualties. 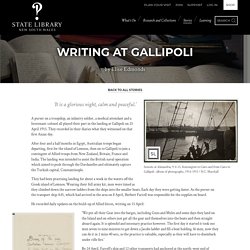 The Stretcher bearers did marvellous and glorious work.’ The following day, Alan Pryce was still in the midst of battle: 'We had a splendid day yesterday with as much shrapnel as we could wish, for it’s beastly stuff and knocked a lot of our chaps over. Our own guns were not landed save one mountain Battery which did not last long, things may be different today … I myself have seen no one to fire at, we are handicapped with heavy scrub, it makes splendid cover for snipers ...' Pryce’s account ends on the 27 April when his battalion was ‘pretty comfortably dug in’. ABC online education. The Battles of Fromelles and Pozières - Battle Scenes. Play the following audio tracks or read their text equivalent beneath British Front Line Trench Narration by Hugo Weaving Audio transcript After they first arrived in France, the Australians, especially those who had served on Gallipoli, found life on the Western Front to be quite comfortable. 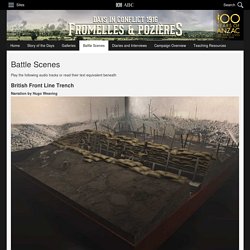 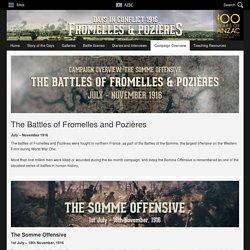 The aim was to deceive German high command into keeping their reserves in place, rather than sending them south to reinforce units against the mighty Allied offensive taking place. Like many of the battles fought in 1916, this feint came at a high price, with approximately 5,500 Australians and 2,000 British killed or wounded within a 24-hour period. The Battles of Fromelles and Pozières - Galleries. 19 July 1916. 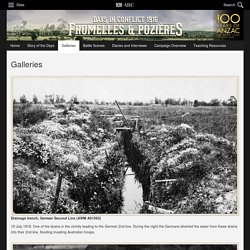 One of the drains in the vicinity leading to the German 2nd line. During the night the Germans diverted the water from these drains into their 2nd line, flooding invading Australian troops. 1912. Lance Corporal Allan Bennett, 32nd Battalion, of Claremont, Western Australia. A business manager prior to enlisting in July 1915, he arrived on the Western Front on 23 June 1916 and was killed in action at Fromelles 20 July 1916. 1916. 19 July 1916.

The Battles of Fromelles and Pozières - Diaries and Interviews. "Hundreds were mown down in the flicker of an eyelid, like great rows of teeth knocked from a comb" Private Walter Downing Audio transcript The 60th climbed on to the parapet, heavily laden, dragging with them scaling ladders, light bridges, picks, shovels and bags of bombs. 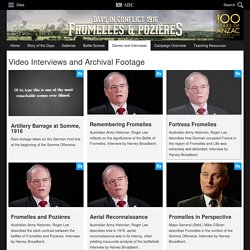 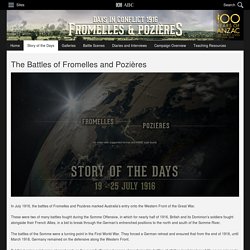 Two and a half hours of daylight remain. The Allied artillery barrage lifts its range to target the rear of the German line as successive waves of British and Australian troops advance against the enemy's front line trenches and the salients. Major Geoff McCrae, a Gallipoli veteran, leads the fourth wave of the 15th Australian Brigade, including the 59th and 60th Battalions - about 2000 men including 60 officers. His men include signallers with wire and telephones to keep headquarters informed of the battle's progress. 75 metres into no man's land, McCrae is shot in the neck and killed. Private Walter 'Jimmy' Downing of 57th Battalion is watching the attack unfold. The Battles of Fromelles and Pozières. Gallipoli. The Story of the Day. Eyewitness Accounts. Event Timeline. 10th Battalion units of the second wave are now landing in the centre of Anzac Cove, alongside about half of 12th Battalion. 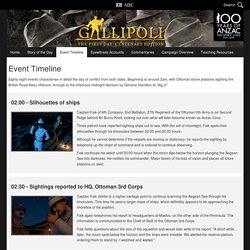 At least three men already slouch dead in the boats as they approach the shoreline. The vanguard of soldiers commanded by Lieutenant Noel Loutit is targeted by rifle fire from above the beach. As the soldiers come ashore, they charge forward out of the boats and give chase to the retreating Ottoman soldiers heading into Shrapnel Valley. When eventually these Ottoman soldiers try to surrender, Loutit's men shoot them before continuing up Shrapnel Valley, following orders to advance with all haste towards 2nd and 3rd Ridge. Meanwhile, Ottoman soldiers remain in place on parts of the first ridge, continuing to fire down on the ANZACs as they land. 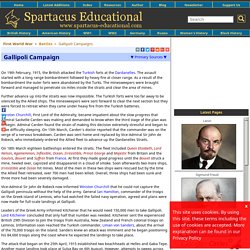 The assault started with a long range bombardment followed by heavy fire at closer range. As a result of the bombardment the outer forts were abandoned by the Turks. The minesweepers were brought forward and managed to penetrate six miles inside the straits and clear the area of mines. Further advance up into the straits was now impossible.

The Turkish forts were too far away to be silenced by the Allied ships. Gallipoli Guide - Anzac Day for New Zealanders. This Guide provides a virtual tour of the peninsula. 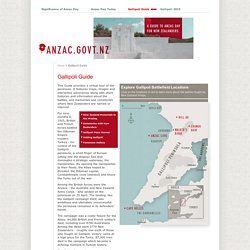 It features maps, images and interactive panoramas along with short histories and information about the battles, and memorials and cemeteries where New Zealanders are named or interred. Gallipoli Peninsula Relief Map. Mapping Gallipoli.