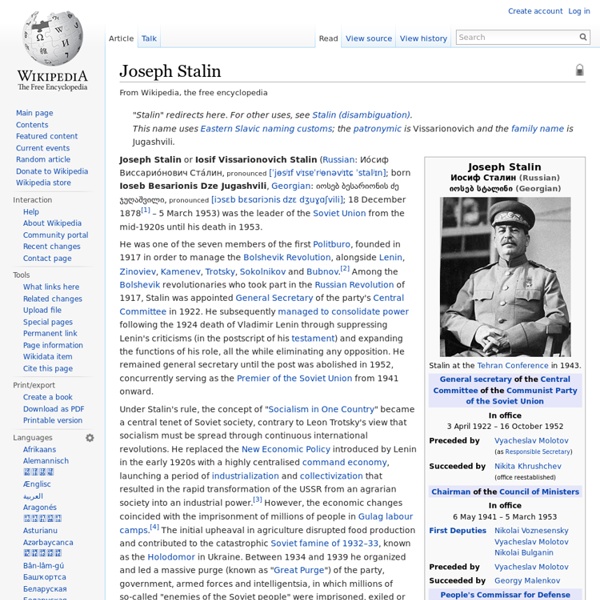 Joseph Stalin or Iosif Vissarionovich Stalin (Russian: Ио́сиф Виссарио́нович Ста́лин, pronounced [ˈjɵsʲɪf vʲɪsɐˈrʲɵnəvʲɪtɕ ˈstalʲɪn]; born Ioseb Besarionis Dze Jugashvili, Georgian: იოსებ ბესარიონის ძე ჯუღაშვილი, pronounced [iɔsɛb bɛsɑriɔnis dzɛ dʒuɣɑʃvili]; 18 December 1878[1] – 5 March 1953) was the leader of the Soviet Union from the mid-1920s until his death in 1953. He was one of the seven members of the first Politburo, founded in 1917 in order to manage the Bolshevik Revolution, alongside Lenin, Zinoviev, Kamenev, Trotsky, Sokolnikov and Bubnov.[2] Among the Bolshevik revolutionaries who took part in the Russian Revolution of 1917, Stalin was appointed General Secretary of the party's Central Committee in 1922. He subsequently managed to consolidate power following the 1924 death of Vladimir Lenin through suppressing Lenin's criticisms (in the postscript of his testament) and expanding the functions of his role, all the while eliminating any opposition. Early life Rise to power J. Related:  war

Wehrmacht The Wehrmacht (German pronunciation: [ˈveːɐ̯maxt] ( Origin and use of the term[edit] The German term Wehrmacht generically describes any nation's Armed Forces, thus, Britische Wehrmacht denotes "British Armed Forces." The term Wehrmacht is in Article 47 of the 1919 Weimar Constitution, establishing that: The Reich's President holds supreme command of all armed forces [i.e. the Wehrmacht] of the Reich ("Der Reichspräsident hat den Oberbefehl über die gesamte Wehrmacht des Reiches"). From 1919, Germany's national defence force was known as the Reichswehr, which name was dropped in favor of Wehrmacht on 16 March 1935. In modern day Germany the name Wehrmacht is considered a proper noun for the 1935–45 armed forces, being replaced by Streitkräfte in its original meaning; however, this was not so even some decades after 1945. History[edit] Werner Goldberg, who was blond and blue-eyed, was used in Wehrmacht recruitment posters as "The Ideal German Soldier." Soldiers[edit] Numbers[edit]

Joseph Stalin - Biography - Dictator Joseph Stalin ruled the Soviet Union for more than two decades, instituting a reign of terror while modernizing Russia and helping to defeat Nazism. Synopsis Born on December 18, 1879, in Gori, Georgia, Joseph Stalin rose to power as General Secretary of the Communist Party, becoming a Soviet dictator upon Vladimir Lenin's death. Stalin forced rapid industrialization and the collectivization of agricultural land, resulting in millions dying from famine while others were sent to camps. His Red Army helped defeat Nazi Germany during WWII. Early Life On December 18, 1879, in the Russian peasant village of Gori, Georgia, Iosif Vissarionovich Dzhugashvili (later known as Joseph Stalin) was born. Joseph's mother, a devout Russian Orthodox Christian, wanted him to become a priest. Though he excelled in seminary school, Joseph left in 1899. In February 1917, the Russian Revolution began. Advertisement — Continue reading below Communist Party Leader Death and Legacy Videos Related Videos

January Uprising Administrative divisions of the Polish-Lithuanian Commonwealth within the pre-partition borders of 1772, introduced by the National Government during the January Uprising in 1863 The January Uprising (Polish: powstanie styczniowe, Lithuanian: 1863 m. sukilimas, Belarusian: Паўстанне 1863-1864 гадоў) was an uprising in the former Polish-Lithuanian Commonwealth (present-day Poland, Lithuania, Belarus, Latvia, parts of Ukraine, and western Russia) against the Russian Empire. It began on 22 January 1863 and lasted until the last insurgents were captured in 1865. The uprising began as a spontaneous protest by young Poles against conscription into the Imperial Russian Army. Eve of the uprising[edit] Russian army in Warsaw during martial law 1861 "The Battle" from the cycle of paintings "Polonia" dedicated to January Uprising of 1863 - Artur Grottger. Uprising in the former Polish Kingdom[edit] Battles of January Uprising in Congress Poland 1863-1864 Evolution of events[edit] Famous insurgents[edit]

Joseph Stalin: A Biographical Companion - Helen Rappaport Helen F. Rappaport was born in 1947 in Bromley. She is a British historian, author, and actress. She studied Russian at Leeds University where she was involved in the university theatre group and launched her acting career. After acting with the Leeds University theatre group she appeared in several television series including Crown Court, Love Hurts and The Bill.

US Enters the Korean Conflict (Originally published in Social Education, the Journal of the National Council for the Social Studies). Background While the end of World War II brought peace and prosperity to most Americans, it also created a heightened state of tension between the Soviet Union and the United States. In 1950 the Korea Peninsula was divided between a Soviet-backed government in the north and an American-backed government in the south. War broke out along the 38th parallel on June 25, 1950. However, the entry of the United States into the conflict signaled a reversal of policy toward Korea. So why did the United States become involved in the Korean conflict? The decision to intervene in Korea grew out of the tense atmosphere that characterized Cold War politics. Events in Asia also contributed to an increased sense of insecurity. The Truman administration also faced internal criticism regarding its commitment to anticommunism at home. Truman's statement also reflected a new military order. The Document

Stalin's Childhood - Joseph Stalin Biography Joseph Stalin was born Joseph Djugashvili in Gori, Georgia (a region annexed by Russia in 1801). He was the third son born to Yekaterina (Keke) and Vissarion (Beso) Djugashvili, but the only one to survive past infancy. Stalin's Parents Disagree About His Future Stalin’s parents had a turbulent marriage, with Beso often beating his wife and son. Part of their marital strife came from their very different ambition for their son. Keke recognized that Soso, as Joseph Stalin was known as a child, was highly intelligent and wanted him to become a Russian Orthodox priest; thus, she made every effort to get him an education. The argument came to a head when Stalin was 12 years old. Keke supported Stalin by working as a laundress, though she later secured more respectable employment at a women's clothing shop. The Seminary Keke was right to note Stalin's intellect, which soon became apparent to his teachers.

War Stalin vs. Trotsky - Joseph Stalin Biography In 1921, the White Army was defeated, leaving Lenin, Stalin and Leon Trotsky as the dominant figures in the new Bolshevik government. Although Stalin and Trotsky were rivals, Lenin appreciated their distinct abilities and promoted both. Trotsky vs. Stalin Trotsky was far more popular than Stalin, so Stalin was given the less public role of General Secretary of the Communist Party in 1922. Trotsky, who was a persuasive orator, maintained a visible presence in foreign affairs and was perceived by many as the heir apparent. However, what neither Lenin nor Trotsky foresaw was that Stalin's position allowed him to build loyalty within the Communist Party, as essential factor in his eventual takeover. Lenin Advocated for Joint Rule Tensions between Stalin and Trotsky increased when Lenin's health began to fail in 1922 with the first of several strokes, raising the difficult question of who would be Lenin’s successor. Stalin Comes to Power

Culture war A culture war (or culture wars) is a struggle between two sets of conflicting cultural values. Origins[edit] United States of America[edit] In American usage the term culture war is used to claim that there is a conflict between those values considered traditionalist or conservative and those considered progressive or liberal. It originated in the 1920s when urban and rural American values came into clear conflict. This followed several decades of immigration to the cities by people considered alien to earlier immigrants. 1990s[edit] The expression was introduced again by the 1991 publication of Culture Wars: The Struggle to Define America by James Davison Hunter, a sociologist at the University of Virginia. He argued that on an increasing number of "hot-button" defining issues — abortion, gun politics, separation of church and state, privacy, recreational drug use, homosexuality, censorship — there existed two definable polarities. Patrick Buchanan, pictured in 2008. 2000s[edit] 2010s[edit]

Spy Satellites Lacrosse Radar Imaging Satellites Lacrosse satellites produce high resolution imagery using synthetic aperture radar, which illuminates targets through cloud cover and/or in darkness. Their orbits are not published by official sources; however, they are readily tracked by hobbyists, who are the sole public source of their orbital elements. Lacrosses are among the brightest of all satellites, typically reaching 2nd magnitude on favourable passes. Four Lacrosse satellites have been launched, three of which remain in orbit. Lacrosse 1 (COSPAR 1988-106B / NORAD 19671 / USA 31) was launched on December 2, 1988, from the Kennedy Space Center, on space shuttle Atlantis (STS-27), which deployed it into a 57 deg, 454 km orbit, from which it manoeuvred to a 687 km orbit. The first four Lacrosses have a characteristic orange-red hue as a result of the extensive use of gold coloured kapton thermal insulation, as shown in the photo below. Satellite Data System (SDS) Satellites Cosmos 2344/Arkon-1