How three fake cottages and an ice cream shop helped defeat the Nazis: The buildings concealed giant pumps that were to send fuel through 500 miles of pipelines to Allied forces in France  Harmless countryside cottages on the Kentish coastline and a shop selling ice cream are unlikely locations for top-secret wartime operations. 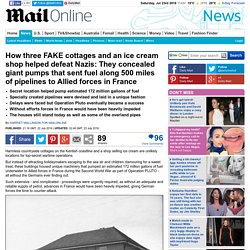 But instead of attracting holidaymakers escaping to the sea air and children clamouring for a sweet treat, these buildings housed unique machinery that pumped an estimated 172 million gallons of fuel underwater to Allied forces in France during the Second World War as part of Operation PLUTO - all without the Germans ever finding out. Such extensive - and complicated - proceedings were urgently required, as without an adequate and reliable supply of petrol, advances in France would have been heavily impeded, giving German forces the time to counter-attack. 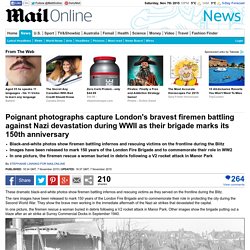 The greatest cultural victory of the Left has been to disregard the Nazi-Soviet Pact. Seventy-five years ago today, Red Army troops smashed into Poland. 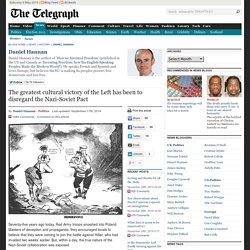 Masters of deception and propaganda, they encouraged locals to believe that they were coming to join the battle against Hitler, who had invaded two weeks’ earlier. But, within a day, the true nature of the Nazi-Soviet collaboration was exposed. The two armies met at the town of Brest, where the 1918 peace treaty between the Kaiser’s government and Lenin’s revolutionary state had been signed. Soldiers fraternised, exchanging food and tobacco – pre-rolled German cigarettes contrasting favourably against rough Russian papirosi. Nazi death camp for WOMEN's shocking medical experiments that injected prisoners with petrol and syphilis. 50,000 women murdered at German camp; 2,500 gassed in one weekend'Undesirables'at the camp included gipsies, political prisoners, Resistance fighters and petty criminalsWomen 'rabbits' were injected with STI in heinous medical experiments Red Army soldiers raped many survivors who saw the camp's liberation Sarah Helm's new book features testimonies from prisoners By Sarah Helm For The Daily Mail Published: 23:51 GMT, 9 January 2015 | Updated: 01:36 GMT, 10 January 2015 Katharina Waitz stared at the 15ft wall topped by barbed wire, took a deep breath and, undaunted, began to climb the last leg to freedom. 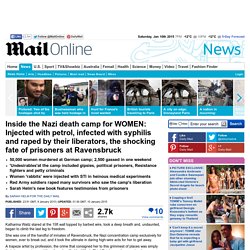 She was one of the handful of inmates of Ravensbruck, the Nazi concentration camp exclusively for women, ever to break out, and it took the ultimate in daring high-wire acts for her to get away. Twice this brave young woman tried to escape and was caught, spending months of torture in the camp’s punishment block. Undeterred, she tried again. But I ploughed on. There were no watchtowers. Dr. Collection of about 250 posters from WWII found in a London garage. Collection of about 250 posters from WWII found in a London garageIncludes rare original of now world-famous Keep Calm and Carry On designCollection will go for £20,000, with some posters fetching £1,200 each By Lizzie Edmonds Published: 17:25 GMT, 8 June 2014 | Updated: 18:33 GMT, 8 June 2014 A set of more than 250 World War Two posters found folded up in a chest of draws are set to sell for £20,000. 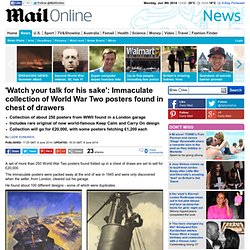 The immaculate posters were packed away at the end of war in 1945 and were only discovered when the seller, from London, cleared out his garage. Quarter of Polish schoolchildren believe World War Two ghetto where Nazis slaughtered 13,000 Jews was a 'success' By Daily Mail Reporter Published: 13:40 GMT, 16 April 2013 | Updated: 16:03 GMT, 17 April 2013 A large proportion of Polish schoolchildren are openly anti-Semitic, a shocking new survey suggests today. 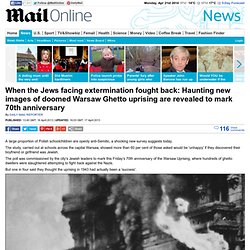 The study, carried out at schools across the capital Warsaw, showed more than 60 per cent of those asked would be 'unhappy' if they discovered their boyfriend or girlfriend was Jewish. The poll was commissioned by the city's Jewish leaders to mark this Friday’s 70th anniversary of the Warsaw Uprising, where hundreds of ghetto dwellers were slaughtered attempting to fight back against the Nazis. But one in four said they thought the uprising in 1943 had actually been a 'success'. France after D-Day: Astonishing online archive of pictures shows the horror, devastation and moments of humanity in the aftermath of the liberation by Allied forces. PhotosNormandie's Photostream. The strange sinking of the Nazi Titanic.

History: World War Two. Hitler: His dark charisma. 11 November 2012Last updated at 19:30 ET Adolf Hitler was an unlikely leader but he still formed a connection with millions of German people, generating a level of charismatic attraction that was almost without parallel. 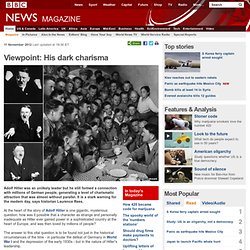 It is a stark warning for the modern day, says historian Laurence Rees. Thousands of British prisoners of war records published online for the first time. Ancestry.co.uk says details include soldiers in First and Second World WarsDigitised records have personal details of famous captured Spitfire pilotsIncludes information on Sir Douglas Bader, who was imprisoned in ColditzWebsite giving free access to millions of war records on Remembrance Day By Simon Tomlinson. 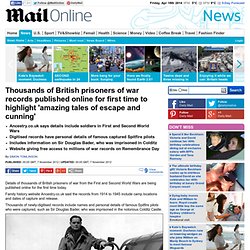 'Human excrement was piled up waist-high': Full horror of Stalingrad revealed for first time as interviews with Russian soldiers finally see the light of day. Stalingrad Protocols gathers interviews with hundreds of troops that Russia had suppressed after the Second World War as only heroism was lauded. 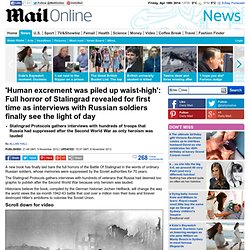 We gunned down English women and children - it was great fun: Newly published transcripts of the private conversations of PoWs prove. By Guy Walters Published: 02:25 GMT, 1 November 2012 | Updated: 13:22 GMT, 1 November 2012 To an untrained eye, the small room must have looked like a telephone exchange. 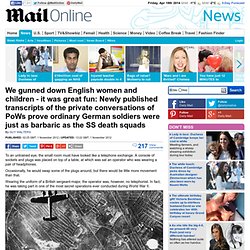