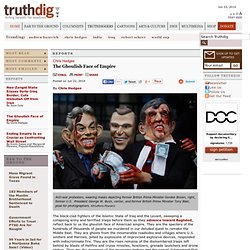 President George W. Bush, center, and former British Prime Minister Tony Blair, pose for photographers. AP/Lefteris Pitarakis The black-clad fighters of the Islamic State of Iraq and the Levant, sweeping a collapsing army and terrified Iraqis before them as they advance toward Baghdad, reflect back to us the ghoulish face of American empire. They are the specters of the hundreds of thousands of people we murdered in our deluded quest to remake the Middle East. The language of violence engenders violence. There is no fight left in us. We should have heeded, while we had a chance, the wails of mothers and fathers. And where are the voices of sanity? They bang their fists. I sat in a restaurant Thursday in Boston’s Kenmore Square with military historian Andrew Bacevich. If you have trouble leaving a comment, review this help page. Column: What we did in Iraq is coming back to haunt us. For the United States, the Iraq war ranks as the most consequential foreign policy failure since Vietnam.

I found this story on Tom Dispach's facebook page: – s243a

In neither instance did U.S. forces succumb to outright defeat, of course. 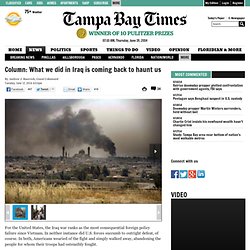 In both, Americans wearied of the fight and simply walked away, abandoning the people for whom their troops had ostensibly fought. In terms of outcomes, however, these two conflicts differ in crucial respects. In Vietnam, we quit and got away with it. Lyndon Johnson's recklessness in expanding the war found its counterpart in Richard Nixon's cynicism in ending it. In Southeast Asia, many people — Vietnamese, Cambodians, Laotians — paid (and continue to pay) for the havoc that the United States wreaked there.

Iraq offers a striking contrast. Today, less than three years after President Obama declared that the Iraq war had ended, Iraqis confront the fate that befell the South Vietnamese. Baghdad itself may or may not eventually fall. Obama is not guilty of consciously selling out a former ally. Iraq in Crisis: Militant Advance Sparks Mass Displacement as "Failed" U.S. Experiment Disintegrates. This is a rush transcript. 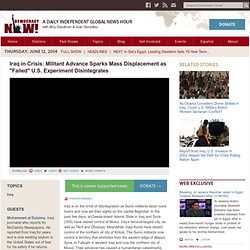 Copy may not be in its final form. JUAN GONZÁLEZ: Iraq is on the brink of disintegration. Sunni Islamist rebels have seized control of Mosul, Iraq’s second-largest city, as well as Tikrit, Saddam Hussein’s hometown, and Dhuluiya which is just 55 miles northwest of the capital of Baghdad. The rebels are now advancing toward Baghdad. Meanwhile, Iraqi Kurds have seized control of the northern oil city of Kirkuk. AMY GOODMAN: The rebel advance has also caused a humanitarian catastrophe. MOSUL REFUGEE: [translated] We were sitting in the house, but we heard clashes and sounds of explosions. JUAN GONZÁLEZ: Mosul fell in part because U.S. Wednesday was a deadly day in Baghdad, as well. To talk more about Iraq, we’re joined by two guests. Let’s go first to South Carolina to Mohammed al Dulaimy. DN! Report from Iraq: U.S. Invasion in 2003 Helped Set Path for Crisis Pulling Nation Apart. US Quietly Ships Weapons To Iraq Despite Risk Of Civil War.

Experts have warned that flow of US weapons into region only deepens political and sectarian violence. 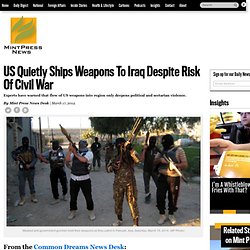 Masked anti-government gunmen hold their weapons as they patrol in Fallujah, Iraq, Saturday, March 15, 2014. (AP Photo) From the Common Dreams News Desk: This month alone, “the United States delivered nearly 100 Hellfire missiles together with hundreds of thousands of rounds of ammunition and M4 rifles” to the Iraqi government, the U.S. Embassy to Iraq revealed Sunday. In a public statement, the U.S. Yet, experts have warned that the ongoingn flow of U.S. weapons into Iraq has only escalated political and sectarian violence in the country and region that was set in motion by the U.S.

The U.S. More from the Associated Press: BAGHDAD (AP) — The United States delivered 100 Hellfire missiles, along with assault rifles and ammunition to Iraq as part of its anti-terrorism assistance to the country, the U.S. embassy to Iraq said on Sunday. Share this article! Print This Story. Iraq & The Drone War. To sort "unrest-iraq"->real-trees.