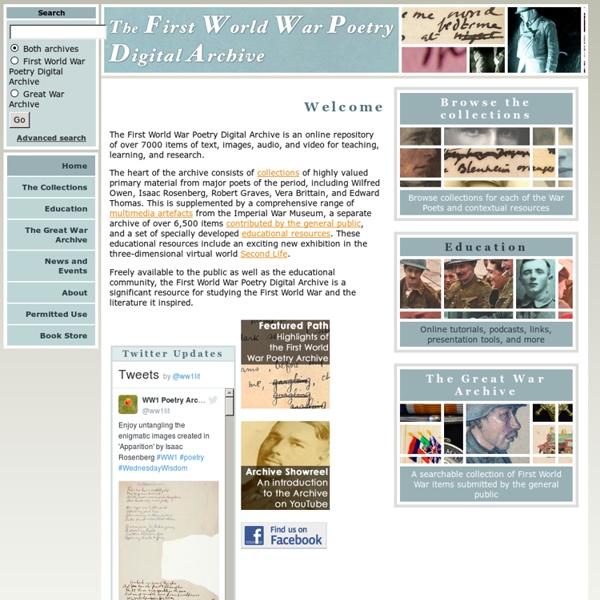 The First World War Poetry Digital Archive is an online repository of over 7000 items of text, images, audio, and video for teaching, learning, and research. The heart of the archive consists of collections of highly valued primary material from major poets of the period, including Wilfred Owen, Isaac Rosenberg, Robert Graves, Vera Brittain, and Edward Thomas. This is supplemented by a comprehensive range of multimedia artefacts from the Imperial War Museum, a separate archive of over 6,500 items contributed by the general public, and a set of specially developed educational resources. Freely available to the public as well as the educational community, the First World War Poetry Digital Archive is a significant resource for studying the First World War and the literature it inspired. The Great War Archive was highly commended at the Times Higher Educational Awards 2008 for 'Outstanding ICT Initiative' Related:  World War One

WWI Battlefields Welcome + Witches in Early Modern England Elizabeth Gaskell Collection The Library holds the world’s most important collection of literary manuscripts by Elizabeth Gaskell (1810-1865), including the only complete manuscript of one of her novels (Wives and Daughters) and her celebrated biography of her friend Charlotte Brontë. Her archive also contains nearly 400 letters from notable figures – including Brontë, Charles Dickens, Thomas Carlyle, George Eliot, John Ruskin and many more – some of which were sent to Gaskell herself and some which she acquired for her own autograph collection. In addition there are artefacts (such as Gaskell’s inkstand) and famous portraits. Two related collections also contain significant Gaskelliana: the Jamison Family Archive, and the papers of Gaskell scholar and collector J.G. Sharps. Material from all of these collections has been digitised, along with some items which remain in the possession of Gaskell’s descendants.

Digital Collection - NZ You are here: Home > Digital Collection > Wars & conflict Heritage Digital Collection Home The Canterbury Aviation (N.Z.) A brief history by Henry Wigram recounting the beginnings of the Canterbury Aviation Company. The Canterbury (New Zealand) Aviation Co. Details of services and training offered by the company following World War I. Christchurch War Memorial: Bridge of Remembrance The history and symbolic features of the Bridge of Remembrance opened By Viscount Jellicoe of Scapa, on Armistice Day, November 11, 1924. City of Christchurch, N.Z. : peace celebrations Programme of Christchurch peace celebrations, held on 19-21 July 1919 to mark the end of World War I. Cecil Malthus: World War I papers [letters, telegrams, documents] A collection of Malthus letters has been digitised and made available online by Christchurch City Libraries. Diggers’ poems A small collection of poems by returned soldiers published after World War I. Ephemera A selection of public notices. Gallipoli papers H.H. The Kiwi

Life in Elizabethan England: A Compendium of Common Knowledge - Contents Written and edited by Maggie Secara 11th Edition Spring 2011 Newly expanded incorporating all previous editions & appendices Designed for the World Wide Web by Paula Kate Marmor Decameron Web The Project | Boccaccio | Texts | Brigata | Plague | Literature | History | Society | Religion | Arts Maps | Themes & Motifs | Bibliography | Pedagogy | Syllabus **** Site Maintenance **** We are currently updating parts of the Decameron Web: the Italian and English texts are temporarily unavailable , but will be available again soon. The rest of site works as normal. We thank you for your patience and are sorry for any inconvenience.