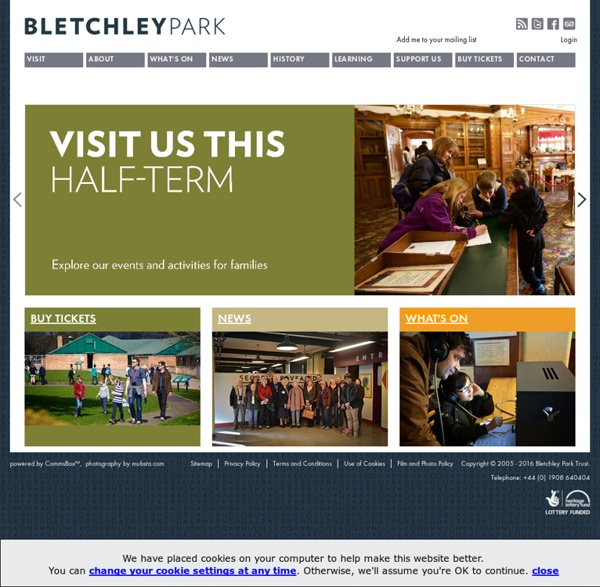 Anne Frank Museum Amsterdam Google Arts & Culture - The Women of Bletchley Park “We listened – we spent our four hours on watch, twiddling the knobs on our receiver up and down the frequencies that the German ships and bases used and apart from any plain language we might pick up. What we were mostly listening to were coded messages and they used three, four or five letter codes and we had message pads which were blocked out in squares in which we would write down the three or four letters as we heard them. Very often they were interrupted, fading or distorted so you really had to listen very very closely. When a German ship came up on one of the frequencies, usually a carrier wave came up first. Pat Davies, née Owtram.

Vintage Calculators Web Museum Home - Red Tail Squadron Red Tail Squadron CIA - Break the Code People from nearly every country share information with CIA, and new individuals contact us daily. If you have information you think might interest CIA due to our foreign intelligence collection mission, there are many ways to reach us. If you know of an imminent threat to a location inside the U.S., immediately contact your local law enforcement or FBI Field Office. For threats outside the U.S., contact CIA or go to a U.S. Embassy or Consulate and ask for the information to be passed to a U.S. official. Please know, CIA does not engage in law enforcement. In addition to the options below, individuals contact CIA in a variety of creative ways. If you feel it is safe, consider providing these details with your submission: Your full name Biographic details, such as a photograph of yourself, and a copy of the biographic page of your passport How you got the information you want to share with CIA How to contact you, including your home address and phone number

The Little-Known Story of the Night Witches, an All-Female Force in WWII In the Nazi-occupied Soviet Union, German soldiers had a very real fear of witches. Namely, the “Night Witches,” an all-female squadron of bomber pilots who ran thousands of daring bombing raids with little more than wooden planes and the cover of night—and should be as celebrated as their male counterparts. This month marks the 73rd anniversary of the start of their pioneering service. From the start of the war, Colonel Marina Raskova, a Soviet pilot who was known as the “Russian Amelia Earhart,” began receiving letters from women across Russia wanting to join the war effort in any way they could. In October of 1941 the order came down from Joseph Stalin that Raskova was to establish a trio of all-female air squads. The regiment began filling out in 1942, with young women ranging in age from 17 to 26 transferring to the small town of Engels to begin flight training. The women faced significant obstacles even before they began engaging in combat—namely, with the equipment.

Code breaking Athens 1944: Britain’s dirty secret This article is the subject of a column by the readers’ editor. “I can still see it very clearly, I have not forgotten,” says Títos Patríkios. “The Athens police firing on the crowd from the roof of the parliament in Syntagma Square. And then came the defining moment: the recklessness of youth, the passion of belief in a justice burning bright: “I jumped up on the fountain in the middle of the square, the one that is still there, and I began to shout: “Comrades, don’t disperse! “I was,” he says now, “profoundly sure, that we would win.” Even now, at 86, when Patríkios “laughs at and with myself that I have reached such an age”, the poet can remember, scene-for-scene, shot for shot, what happened in the central square of Greek political life on the morning of 3 December 1944. The crowd carried Greek, American, British and Soviet flags, and chanted: “Viva Churchill, Viva Roosevelt, Viva Stalin’” in endorsement of the wartime alliance. There is no overstating the horror of occupation.

Potsdam Revisited Documentary Film featuring Stuart Canin Codebreaking Introduction Welcome to a world of secrecy, spies and subterfuge. Ciphers and codes have been around since the Romans, and are one of the oldest forms of secret communication. Cryptography is the science of encoding and decoding secret messages. Although we tend to use the words code and cipher interchangeabley, they actually have quite distinct meanings. our message, ‘The Prime Minister of England will be assassinated at midnight by a spy’ might be encoded as ‘The green cow will read the book at the supermarket’ On the other hand, in a cipher, the encryption is done at the level of the letter, making it far more difficult to crack, and therefore more secure. Steganography Although modern cryptographic developments such as PGP and RSA are extremely secure, we all know that they are hiding secret information, and so are vulnerable to attack. Nowadays, it works by replacing bits of unused data in computer files with the secret information, often securely encrypted beforehand.

How India Bailed Out The West In World War II - Swarajya Seventy years ago, this month, Germany surrendered to the Allies to end World War II in Europe. It is time India’s game-changing contribution to the victory is acknowledged in the actual context of Britain’s limitations. Also, what India got in return. One of the little known facts about World War II is that it was India’s contribution of men and material that bailed out the West. Over 2.6 million Indian troops played a decisive role in the greatest conflict of the 20th century and helped Britain stay in the fight. Equally critical was Indian material help. Britain’s dependence on India was near total. Field Marshal Claude Auchinleck, Commander-in-Chief of the British Indian Army from 1942, asserted that the British “Couldn’t have come through both wars if they hadn’t had the Indian Army”. To be sure, eight out of 10 German soldiers who died in battle, died on the Russian front and it was Russian military might that steamrolled the once invincible German Army. Fear Stalked The British