WWII lend-lease: was the US aid that helpful? (I)  The Lend-Lease Act, or “An Act to Promote the Defense of the United States,” which was signed by President Roosevelt on March 11, 1941, gave the US president the right “to sell, transfer title to, exchange, lease, lend, or otherwise dispose of … any defense article … for the government of any country whose defense the President deems vital to the defense of the United States.” 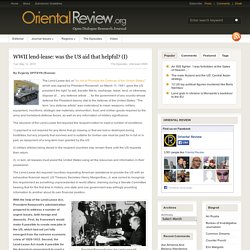 The term “any defense article” was understood to mean weapons, military equipment, munitions, strategic raw materials, ammunition, food, and civilian goods required by the army and homeland-defense forces, as well as any information of military significance. The structure of the Lend-Lease Act required the recipient nation to meet a number of conditions: 1) payment is not required for any items that go missing or that are lost or destroyed during hostilities, but any property that survives and is suitable for civilian use must be paid for in full or in part, as repayment of a long-term loan granted by the US. WWII lend-lease: was the US aid that helpful? (II)  Part I Nonlethal lend-lease aid Besides weapons, other supplies were also provided under lend-lease. 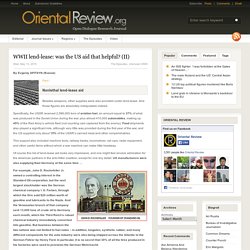 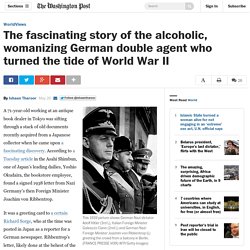 (FRANCE PRESSE VOIR/AFP/Getty Images) A 71-year-old working at an antique book dealer in Tokyo was sifting through a stack of old documents recently acquired from a Japanese collector when he came upon a fascinating discovery. According to a Tuesday article in the Asahi Shimbun, one of Japan's leading dailies, Yoshio Okudaira, the bookstore employee, found a signed 1938 letter from Nazi Germany's then Foreign Minister Joachim von Ribbentrop.

It was a greeting card to a certain Richard Sorge, who at the time was posted in Japan as a reporter for a German newspaper. Sorge was indeed working overtime, but not for the Nazis. [Don't forget how the Soviet Union saved the world from Hitler.] But he was already a larger than life figure. "That was the bravest thing I ever did. Ardennes 1944: Hitler’s Last Gamble by Antony Beevor review – a startlingly detailed account. Remembering D-Day: GE and the Invasion That... By GE Reports staff On June 6, 1944, nearly 160,000 American, British, Canadian and other Allied soldiers boarded 5,000 ships and landing craft in Plymouth, Southampton and other English ports and embarked on the largest seaborne invasion in history. 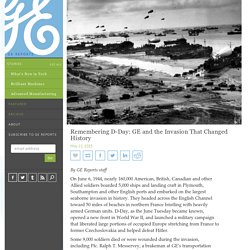 They headed across the English Channel toward 50 miles of beaches in northern France bristling with heavily armed German units. D-Day, as the June Tuesday became known, opened a new front in World War II, and launched a military campaign that liberated large portions of occupied Europe stretching from France to former Czechoslovakia and helped defeat Hitler. Some 9,000 soldiers died or were wounded during the invasion, including Pfc. Ralph T. Pvt. Crego had enlisted the previous year and left behind a job at a GE plant in Schenectady, NY. Crego was “somewhere in Belgium” in Sept. 1944, when he shared his view of the invasion with Works News readers in a published letter. 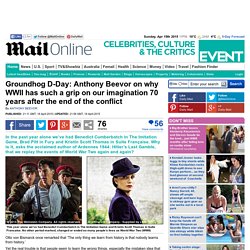 Why is it, asks the acclaimed author of Ardennes 1944: Hitler’s Last Gamble, that we replay the events of World War Two again and again? This year alone we've had Benedict Cumberbatch in The Imitation Game and Kristin Scott Thomas in Suite Francaise. No other period marked, changed or ended so many people’s lives as World War Two (WWII) Otto von Bismarck once remarked that ‘The only thing we learn from history is that nobody learns from history.’ The banker behind Hitler’s shadow empire. By mid-1936 Spain was economically backward, socially volatile, and politically explosive. 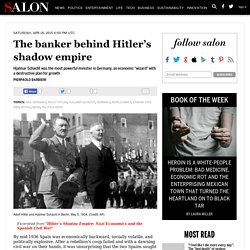 After a rebellion’s coup failed and with a dawning civil war on their hands, it was unsurprising that the two Spains sought supplies from the great powers to make up for their deficits in armaments and technology. Foreign supplies were, as of the coup, a necessary—if not sufficient—element of victory in the dawning civil war. But only one side received the decisive support that allowed it to overcome its initial material, territorial, and financial inferiority, and it was not the side that had the initial economic, geographic, and strategic advantage.

Eventually fascist intervention allowed Franco to undertake another Reconquista, cleansing Spain not of Moors but of Reds. In the thirty-two months of protracted war, all powers would somehow change their original strategic stance toward the “Spanish question,” but not enough to alter the strategic decisions at the dawn of the conflict.