The Most Biased Name in News 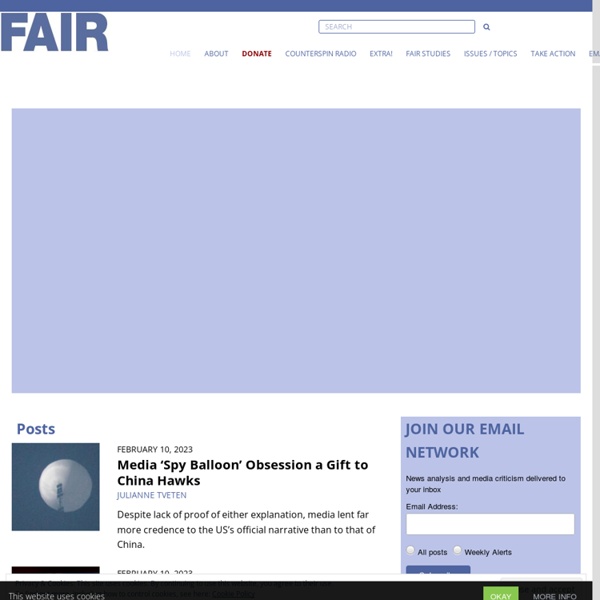 Adam Gaffney on Obamacare Costs; Astra Taylor on 'The People's Platform'A progressive physician talks about the limits of the Affordable Care Act, and author Astra Taylor discusses how the internet can inhibit democracy. Can White People Be Terrorists?Why won't media call Frazier Glenn Miller a terrorist? The decision is a political one. FAIR TV: April 11, 2014Right-wing pundits fudge the numbers on Obamacare, Media botch Israel-Palestine timeline and Bill O'Reilly finds Moses at the Supreme Court. Botching the Israel/Palestine TimelineThe story behind the breakdown of Israel-Palestine negotiations is easy to understand.

Bias? CNN Headline, Story Call Those Opposed to Raising the Debt Ceiling…‘Wingnuts’ One news outlet that has been frequently criticized for liberal bias is going to have a hard time slithering its way out of this one. Earlier today, CNN Money’s Jeanne Sahadi published an article about America’s ongoing debt ceiling debate. While this is certainly an important subject worth discussing and examining, Sahadi’s headline was startling. It read: “Wingnut debt ceiling demands” (see left) and appeared under the site’s “news” section (where it remains). The article is not labeled as an op-ed, nor is it placed in a section of the web site that would cause readers to assume that it is an opinion piece. After reading the text, readers are left with the notion (and they are told so in the headline) that anyone who opposes raising the debt ceiling without some preconditions being met is a wingnut.

Category:Government watchdog groups in the United States This category includes non-partisan, non-governmental groups in the United States whose stated mission includes monitoring branches of the state or federal governments for fraud, waste, abuse, corruption, mismanagement, illegal activity, campaign donor influence, abuse of authority, miscarriage of justice, and so forth. Groups whose primary mission is one of political or issue advocacy are not included; examples of such groups include the Reform Party and the National Rifle Association, both of which are categorized elsewhere. Truth in American Education Subcategories This category has the following 2 subcategories, out of 2 total. Pages in category "Government watchdog groups in the United States"

FOX News Bias Evidence FOX News Channel Bias For Daily Updates and information about Bill O'Reilly, FOX news, the corporate media, and the crooked republicans in the White House, visit the oreilly-sucks Forum. You can get to it through the Forums link on the main page or Click Here Pew Media Study - Only 25% Trust FOX News Network: Less Than 33% Trust Any Cable Media Source Faux Journalism is The White House's New Ally: Frank Rich Exposes FOX News Right-Wing Bias The need for media objectivity in reporting conflict The media, both print and electronic, can play an important role in defusing tension, reducing and containing conflicts. It can do so by being deeply aware of the fragility of a country's' social fabric, of the efforts being expended at unifying a country's polarized and ethnicised politics and more importantly by objectively reporting conflict incidences as they unfold. However, recent reports appearing in cross sections of mainstream print media in Kenya has cast a pale shadow on the role, neutrality and objectivity of media in reporting conflicts. A good case is when one of the respected dailies in Kenya reported that suspected Pokot raiders from East Baringo attacked a Turkana manyatta in Baragoi, Samburu district driving away 3,000 camels, 100 cattle and 100 donkeys! This kind of "alarmist" reporting provokes pertinent questions. What this entails is that as a watchdog, the media should give credit where it is due and criticism where appropriate.

Principles of Journalism The first three years of the Project’s work involved listening and talking with journalists and others around the country about what defines the work. What emerged out of those conversations are the following nine core principles of journalism: 1. Journalism’s first obligation is to the truth Democracy depends on citizens having reliable, accurate facts put in a meaningful context. Journalism does not pursue truth in an absolute or philosophical sense, but it can–and must–pursue it in a practical sense. The Public Intellectual Within the last few decades, the emergence of public intellectuals as important cultural and social critics has raised fundamental questions not only about the social function of academics, but also about the connection between higher education and public life, between academic work and the major issues shaping the broader society. Truthout's Public Intellectual Project will provide progressive academics with an opportunity to address a number of important social issues in a language that is both rigorous and accessible. All too often, academics produce work that is either too abstract for a generally informed public, or they separate their scholarship from the myriad of issues and contemporary problems that shape everyday life in the United States and abroad. Articles by Henry A.

CNN Bias Editor's Note: 04/18/2012 An editorial opinion Now that tht the 2012 election is near, that's all the media talks about. Newsweek Examines The "Myth" Of Media Objectivity Newsweek: She tried to make a joke of it. At the debate in Cleveland last week, Hillary Clinton brought up a "Saturday Night Live" skit about journalists fawning over Barack Obama at a mock debate. "Maybe we should ask Barack if he's comfortable and needs another pillow," said Clinton.

Rethinking Objective Journalism July 8, 2003 | Like this article? Join our email list: Stay up to date with the latest headlines via email.