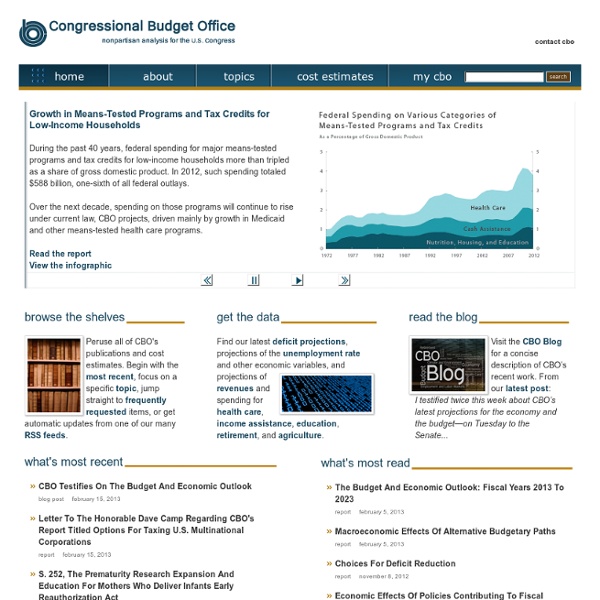 An Analysis of the President's 2015 Budget The President's proposals would, relative to CBO's current-law baseline, boost deficits from 2014 through 2016 but reduce them from 2017 through 2024, CBO and JCT estimate. Deficits would total $6.6 trillion between 2015 and 2024, $1.0 trillion less than the cumulative deficit in CBO's baseline. Federal debt held by the public would equal 74 percent of GDP at the end of 2024, the same as it is expected to be at the end of 2014. Read the report Updated Budget Projections: 2014 to 2024

S&L Bailout: Assessing the Impact: CQR Report OutlineSpecial Focus Introduction Most experts agree that rapid deregulation and lax supervision led to the S&L crisis—a financial disaster that could run well over $100 billion. But there is wide disagreement over how serious the future economic impact of the S&L bailout will be, and there is also disagreement over what should be done to prevent a similar crisis from happening again. National Atlas home page The National Map is now offering a collection of small-scale datasets that can be downloaded for free. Although the 1997-2014 Edition of the National Atlas of the United States was retired in September 2014, The National Map recognizes the importance of continuing to make a collection of the small-scale datasets, originally developed for the National Atlas, available to users. Small-scale maps have an advantage over large-scale maps when there is a need to show a large area in a single view. This makes small-scale maps an ideal solution for scientists, decision-makers, and planners needing to provide a geographical context for the research projects. Generally, certain geographical and feature details found in large-scale maps are limited or omitted in small-scale maps. The choice of small-scale maps always comes down to the intended use of the final map.

FedStats New Justice Department's FIRREA Cases Against Banks: Holding The Victim Responsible The government’s ever-evolving response response to the United States financial crisis has come full circle, as civil Justice Department Attorneys seek to rely on legislation enacted to protect financial institutions from fraud to sue those very same institutions. Recently, the United States Attorney’s Office for the Southern District of New York has initiated a number of law suits under the “obscure” Financial Institutions Reform Recovery Enforcement Act (FIRREA). FIRREA was enacted in 1989 in response to the massive failure of almost half of America’s savings and loan institutions. In its 24 year history, the law typically has been used to bring suit against officers and directors of failed institutions. The government now seeks to expand the statute’s reach to include the institutions themselves.

February 9, 1989: Address Before a Joint Session of Congress - George Bush - tale Transcript Mr. Speaker, Mr. President, and distinguished Members of the House and Senate, honored guests, and fellow citizens: Less than 3 weeks ago, I joined you on the West Front of this very building and, looking over the monuments to our proud past, offered you my hand in filling the next page of American history with a story of extended prosperity and continued peace. And tonight I'm back to offer you my plans as well. Origins and causes of the S&L debacle : a blueprint for reform Origins and causes of the S&L debacle : a blueprint for reform ... - Full View | HathiTrust Digital Library | HathiTrust Digital Library Navigation links for help, collections About this Book Catalog Record Details Federal Reserve History In the 1980s, the financial sector suffered through a period of distress that was focused on the nation’s savings and loan (S&L) industry. Inflation rates and interest rates both rose dramatically in the late 1970s and early 1980s. This produced two problems for S&Ls. First, the interest rates that they could pay on deposits were set by the federal government and were substantially below what could be earned elsewhere, leading savers to withdraw their funds. Second, S&Ls primarily made long-term fixed-rate mortgages. When interest rates rose, these mortgages lost a considerable amount of value, which essentially wiped out the S&L industry’s net worth.