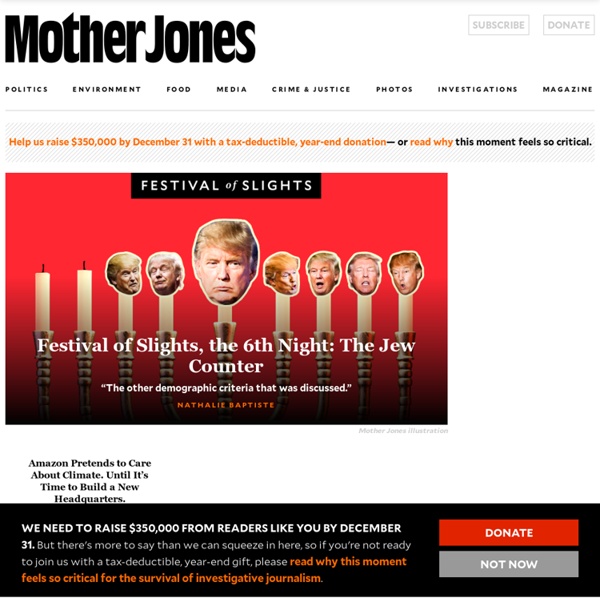 Did you know that Mother Jones is a 501(c)(3) nonprofit? It's true: The majority of our funding comes from readers like you. Your contributions keep us free, independent, and uncensored. Will you support the Mother Jones Investigative Fund with a $5 gift? Your donation of any amount will make a real difference. It takes under 60 seconds to give, and you can donate via credit card or PayPal.

Related:  Magazines & Radios • The Rise of Fascism, once again

Future - Welcome to a home for the insatiably curious What is BBC Future? Well, for starters we are about so much more than making predictions. Our mission statement is simple: "Making you smarter every day." BBC Future was born because you told us you wanted more in-depth coverage of science, health and technology – so we aim to provide expert analysis and features about the big ideas shaping the world, and the new insights challenging what we think we know about ourselves. We are not a futurology website (although we dabble). Robert Mercer, the most important political money man you've never heard of In 1993, Mercer and IBM colleague Peter Brown got a recruitment letter from Renaissance. They initially threw the letters out, according to rare October 2013 public comments by Brown at Johns Hopkins University, but ultimately decided to leave the IBM job at which they were "very happy." Mercer was struggling with paying college tuition bills for his three daughters, according to Brown, and Renaissance was offering 50 percent more pay. Simons—a former government defense code breaker, chairman of the mathematics department at Stony Brook University and a prize-winning mathematician—needed coding help and Mercer and Brown provided it. Renaissance, which employs about 75 science Ph.D. recipients, looks for unusual market patterns and then writes computer codes to trade on them.

ZNet Top Welcome to ZCommunications. The site has ZNet and ZMag content, topic and place pages under the Focuses link in the top menu - reading lists and whole books, debates, interviews, multimedia, Blogs, Forums, comments, a Store, Sustainer program, WISC, and more. Relating to Z To participate more deeply and generally in ZCommunications, please become a Sustainer. Sustainers who log in will see "+ New" in the black band at the top. Use that to add a blog post. ABOUT US Hi there! So here’s our story…. This is how it all started… From Newspapers, Magazines, Journals, Books to Websites, Blogs, Twitter Profiles and Quota accounts, we, just like the other youngsters, were attracted to the process of information assimilation and drawing conclusions based on those pieces of information.

Exclusive: Steve Bannon, Trump’s New C.E.O., Hints at His Master Plan Even for a campaign creating regular media tremors, the hiring of Stephen K. Bannon as the new campaign C.E.O. for Donald Trump has to count as a real shock. Trump is a first-time candidate who has talked about professionalizing his campaign, and yet he has hired a media bomb-thrower with no experience on the trail. But on another level, it is no surprise, since for years there has been a political symbiosis between Trump, Bannon, and Breitbart Media, the news organization that Bannon has led for the last four years. In truth, Bannon and Breitbart Media were Trump before Trump, creating the political philosophy and the political army in waiting that has been the engine for the candidate’s astonishing rise in American politics. To understand the relationship between Trump and Bannon, you need to start with Andrew Breitbart himself.

Alternative media Because the term "alternative" has connotations of self-marginalization, some media outlets now prefer the term "independent" over "alternative". Several different categories of media may fall under the heading of alternative media. These include, but are not limited to, radical media, dissident and social movement media, ethnic/racial media, indigenous media, community media, subcultural media, student media, and avant-garde media. Each of these categories highlights the perceived shortcomings of dominant media to serve particular audiences, aims and interests, and attempts to overcome these shortcomings through their own media. All of Donald Trump's Business Ties in One Overwhelming Visualization Before Donald Trump was the president, he was a businessman. He came to office leading a vast business enterprise that includes real estate, casinos, and a lucrative branding operation. “The network is huge,” says designer Kim Albrecht, whose riveting data visualization Trump Connections attempts to untangle it all. Albrecht used data from BuzzFeed’s TrumpWorld investigation into the president’s 1,500-odd business connections to create two visualizations. The first places Trump at the center of an enormous web. The other, which resembles a family tree, deconstructs that network person by person, business by business.

Conspiracy Watch conspiracywatch.net may be available for purchase. Inquire today! Inquiry Form Inquire with your Facebook or LinkedIn profile, or complete this form to receive a free quote. 10 Most Influential People in the Alternative Media (2011) Activist Post Many readers will expect to see Matt Drudge or Arianna Huffington on this list. Although they both indeed have leading Internet news websites that cover some fringe stories and report on systematic injustices more so than the mainstream media, they primarily aggregate mainline news. Therefore, they are excluded from our “alternative media” label.