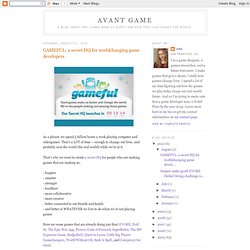 That’s a LOT of time -- enough to change our lives, and probably save the world (the real world) while we’re at it. That's why we want to create a secret HQ for people who are making games that are making us: - happier - smarter - stronger - healthier - more collaborative - more creative - better connected to our friends and family - and better at WHATEVER we love to do when we’re not playing games Here are some games that are already doing just that: EVOKE, Fold It! What all of these projects have in common: they’re dedicated to making some kind of a real positive impact on gamers’ lives and the world around them. In February, I gave a TED Talk that explains exactly how games can make a better world. GAMEFUL, a Secret HQ for Worldchanging Game Developers by Jane McGonigal.

MITcompar ative Media Studies. Vidgames make Hollywood play - Entertainment News, Technology Ne. Five years ago, the relationship between the videogame world and major studios was pretty straightforward. Hollywood made movies — and game companies licensed those films to create games. The “Tomb Raider” and “Resident Evil” games reversed that order, as games were transformed into film franchises. But no matter which came first, gamemakers were generally in the less powerful position. That’s quickly changing as entertainment tastes evolve — and game companies are sending the word to studios that it’s time to rethink the relationship. Some studios have begun to respond, creating franchises directly for the gaming world and adding plans for gaming labs to their operations. 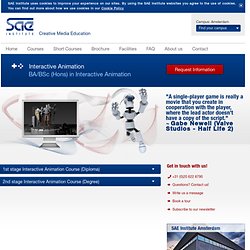 This requires excellent 3D skills and broad knowledge about the games pipeline, history and experience in producing high quality content. This course provides hands-on training in industry standard software. Students are trained in game design and writing game design documents, storytelling and scriptwriting, 2D drawing and animation and various 3D techniques. Besides that students acquire important inside knowledge about the industry during the course. Graduates of the first year obtain a Diploma and are prepared for entry-level work in the games of animation industry in positions such as (junior) texture, modeling, animation, rigging or lighting artist. Generationnext -about- 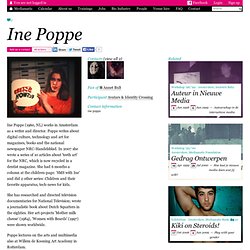 Poppe writes about digital culture, technology and art for magazines, books and the national newspaper NRC-Handelsblad. In 2007 she wrote a series of 10 articles about 'teeth art' for the NRC, which is now recycled in a dentist magazine. She had 6 months a column at the children-page: 'SMS with Ine' and did 2 other series: Children and their favorite apparatus, tech-news for kids. She has researched and directed television documentaries for National Television; wrote a journalistic book about Dutch Squatters in the eighties. Her art-projects 'Mother milk cheese' (1984), 'Women with Beards' (1997) were shown worldwide. Poppe lectures on the arts and multimedia also at Willem de Kooning Art Academy in Rotterdam. Poppe also wrote scenarios for several computer games, in 2002 for the Teylers Science Museum in Haarlem ‘Teylers Adventure’. TANDENKUNST artikelen:weblogs.nrc.nl/weblog/cultuurblog/category/tandenkunst.