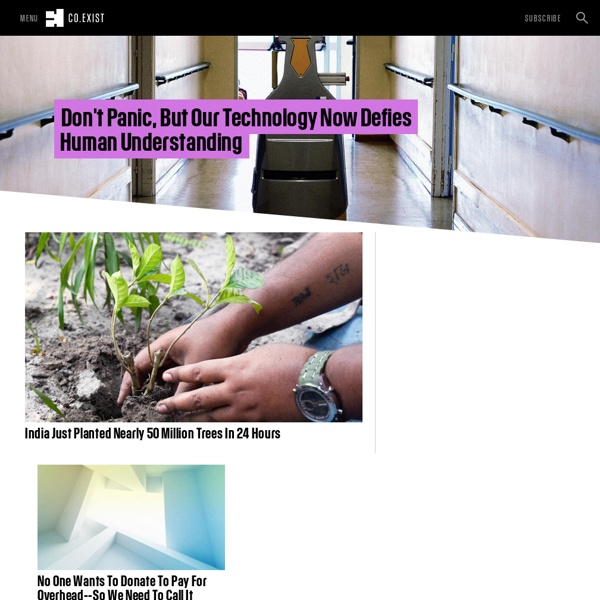 Mobstr Street Art Voici le travail très original et décalé du street artist anglais Mobstr qui, à l’instar de Banksy, détourne les affiches publicitaires et l’environnement public. Avec des pochoirs, il dépose lettre après lettre des formules percutantes sur les murs de Londres. Plus d’images de ses actions dans la suite de l’article. Squirt It’s a bookmarklet Squirt stores anonymous interaction data to help us improve the product. Can’t find your bookmarks bar? This 30-second video tutorial will have you speed reading in, well, about 30 seconds. Or, read these instructions Forget the lonely genius myth, creativity is about opening your world (with images) · Gullibear We made it pretty clear that the only way to come up with great solutions, innovative answers is to share it with others. Don't just share it with your friends, if you want genuine innovation, share it with people you don't know, who belong to other groups, who will be able to give you new insights. The last important point that came up in the research is the critical role of feedback loops.

Bardot Advanced Ice Cream Technologies, a boutique ice cream purveyor from Mexico, came to us with dreams of sharing their artfully crafted ice cream bars with America. Unfortunately, their name sounded more like an innovator in cold storage than an artisan iced confectionery. "Our goal was to create a name, identity and design system that conveyed the unparalleled decadence of their product, creating a sense of luxury, sensuality and desire. Their product was delicious, our job was to make it beautiful. "

Topsy - Real-time search for the social web With iOS 9, Search lets you look for content from the web, your contacts, apps, nearby places, and more. Powered by Siri, Search offers suggestions and updates results as you type. There are two ways to use Search on your iOS device. Quick Search Drag down from the middle of the Home screen and type what you're looking for. Siri Suggestions ViziCities development diary #1: One month in Update: The second Developer Diary is out Just over a month ago I announced ViziCities, the latest project from Pete Smart and myself. We're not quite ready to release it yet but make sure you sign up for the beta to be the first to use it.

Carre Rouge & Carre Blanc Red and White Wines The vast majority of Russians cannot feel the difference between the brands of French, Italian and Spanish wines. In everyday life terms, there a phrasal expression of "Good Red" and "Good White" wine. This means that the situation demands a direct and effective solution in reference for making a wine purchase. In DesignDepot we have developed labels for the wine brand CARRE ROUGE & CARRE BLANC launched by «OVG» team. Wine of two kinds, red and white, the wine produced and bottled in Russia, under French trademark using it's technology and ingredients to fill in the segment of up-middle. A Social Networks Theory of Privacy by Lior Strahilevitz What facts are public and what facts are private? It is the fundamental, first-principles question in privacy law, and a necessary element in the two most important privacy torts, public disclosure of private facts and intrusion upon seclusion. Yet the American courts lack a coherent, consistent methodology for determining whether an individual has a reasonable expectation of privacy in a particular fact that he has shared with one or more persons. Some courts hold that when an individual discloses a sensitive fact about himself to a handful of co-workers, friends, relatives, or strangers, this disclosure renders the fact in question sufficiently public to deprive him of a tort cause of action when that fact is subsequently widely disseminated or obtained by a third party using improper means.

Customizable LED Vodka Bottles Bring A New Meaning To ‘Message In A Bottle’ New York-based company Medea has created an innovative way to package and sell its award-winning vodka—which it claims is ‘Times Square’ in a bottle. The company has designed a glass bottle with a programmable LED strip that is able to store six different scrolling messages, with each message containing up to 255 characters—allowing users to key in personalized messages onto the bottle. According to Medea, the battery in the LED strip will last for over a year and the message will run continuously for three minutes before shutting off to conserve power.

What Is Haptics? Explained in simple terms. Haptics is a mysterious sounding word with quite a simple meaning – it is a Greek word that refers to the sense of touch. Today, the word is used to describe some exciting technologies that are finding their way into the mobile phone world. Haptic technologies have been around for a fairly long time. People who have played video games using a console will have found that some games controllers have an integrated rumble feature, which is used to simulate the feel of firing a gun, taking a punch, or any number of other things. Look Who’s Following You on the Internet The savvy Web user knows that the Internet isn’t all fun and games. There are plenty of companies out there watching every move a user makes, with an aim to sending their way ads they will click on. But just how many companies are tracking you can be shocking, especially when you don’t know what they know about you, and you have never in your life heard of them before. On Wednesday Alexis Madrigal of The Atlantic published a piece he had been working on at least since January, when he first tweeted about Collusion, a plug-in built by a Mozilla engineer that keeps a record of all the sites you have been to in a browsing session and all of their ghostly, behind-the-scenes counterparts: the sites that keep track of what you do on each site.