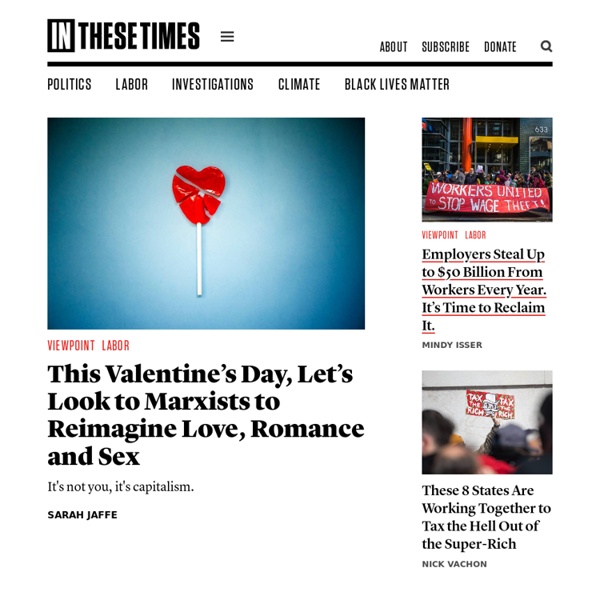 The Rise of the Digital Proletariat Astra Taylor reminds us that the Internet cannot magically produce revolution. more By Sarah Jaffe Is Harmon’s ‘Community’ Really Back in Harmony? How We Can Fix Wall Street Judge Blames the Press for Telling the Truth About Muslim Surveillance

Cold War II by Noam Chomsky These are exciting days in Washington, as the government directs its energies to the demanding task of "containing Iran" in what Washington Post correspondent Robin Wright, joining others, calls "Cold War II." During Cold War I, the task was to contain two awesome forces. The lesser and more moderate force was "an implacable enemy whose avowed objective is world domination by whatever means and at whatever cost." Hence "if the United States is to survive," it will have to adopt a "repugnant philosophy" and reject "acceptable norms of human conduct" and the "long-standing American concepts of `fair play'" that had been exhibited with such searing clarity in the conquest of the national territory, the Philippines, Haiti and other beneficiaries of "the idealistic new world bent on ending inhumanity," as the newspaper of record describes our noble mission.

The Truth Denied - MK-ULTRA MIND CONTROL TRAUMA : Interview with Max Spiers Max Spiers Max Spiers To have the courage to speak the truth when the truth is not what you want to hear! During the interview, Max Spiers was attacked three times, but he stayed with us during the interview like a real trooper! Top 10 Ways to Make Yourself Look (and Be) Smarter How terribly obnoxious of you. Thanks for sharing. Well, it is probably not the smartest move ever to call monolingual people dumb. But here in Europe (or at least in most countries) learning a second language is compulsory in secondary school. The Hidden Life of Marilyn Monroe, the Original Hollywood Mind Control Slave (Part-I) Marilyn Monroe is possibly the most iconic figure in American culture and the most recognizable sex symbol of all times. However, behind Monroe’s photogenic smile was a fragile individual who was exploited and subjected to mind control by powerful handlers. The first part of this two-part series will look at the hidden life of Marilyn, a Hollywood Monarch slave. Marilyn Monroe is the ultimate sex symbol, embodying everything that Hollywood represents: glamor, glitz and sex-appeal. Her iconic sensual blonde persona forever revolutionized the movie industry and, to this day, is greatly influential in popular culture. While Marilyn represents everything that is glamorous about Hollywood, the disturbing story of her private life equally represents everything that is dark in Hollywood.

Kaboom: A Soldier's War Journal I was standing in the main room of the house with Sonic – a young terp with a propensity to spike his hair - explaining to the mother why we were there. Yes, of course you can pick up the crying baby. No, we are not here to talk about your eldest daughter being so sick that she’s in the hospital, although that is awful. Yes, I want everyone in the house outside. Now. Whistleblower Magazine April 2014 – THE WAR FOR THE GOP: How conservatives plan to take over the Republican Party and stop the Obama juggernaut Get special discounts on quantity purchases of your favorite Whistleblower issues. For more information or to order at quantity discounts, please call WND Customer Service toll-free at 1-800-496-3266 (1-800-4WND-COM) or email support@wnd.com.

Berghuis v. Thompkins (08-1470) Appealed from the United States Court of Appeals for the Sixth Circuit (Nov. 19, 2008) Oral argument: March 1, 2010 In February of 2001, Southfield, Michigan police officers questioned Van Chester Thompkins (“Thompkins”) for roughly three hours about a shooting that had occurred over one year prior. Although Thompkins remained silent for much of the interrogation, he ultimately provided police with incriminating statements. In 2002, Thompkins was convicted of first-degree murder. Joe Nolan's Insomnia Halloween Rising For this latest spooky October post, I’ve grown a little bit impatient with the month and I want to cut to the chase. Here’s a nice little primer on the Celtic roots of the Halloween holiday and its evolution through the ages to the seemingly silly, scary celebration we know today. Do the souls of the…

The Mystery Woman Behind the Murdoch Mess Rebekah Wade was 20 years old in 1988 when she showed up at the Warrington office of The Post, a now defunct national tabloid. As Graham Ball, then the features editor, recalled to the BBC, she approached him and said, “I am going to come and work with you on the features desk as the features secretary or administrator.” He told her that would be impossible, as he was moving the next week to work in the paper’s London office. On the following Monday, he showed up at his new London office “and there she was.” As another editor recalled, she was a “skinny, hollow-eyed” young woman, who was “very, very, very ambitious,” and prepared to go to great lengths “to get on.” Constitution Project Report on Detainee Treatment Concludes U.S. Engaged in Torture Statement of the Task Force This report of The Constitution Project’s Task Force on Detainee Treatment is the result of almost two years of intensive study, investigation and deliberation. The project was undertaken with the belief that it was important to provide an accurate and authoritative account of how the United States treated people its forces held in custody as the nation mobilized to deal with a global terrorist threat. The events examined in this report are unprecedented in U.S. history. In the course of the nation’s many previous conflicts, there is little doubt that some U.S. personnel committed brutal acts against captives, as have armies and governments throughout history.

Futurism Hans Rosling: The Joy of Stats Home | About Us | Contact | Subscribe Hans Rosling: The Joy of Stats BBC Four Zombie Hasbara: 'World War Z' and Hollywood’s Zionist embrace Zombies rush the wall in World War Z. I went to the Drive-In in Atlanta Friday night, to celebrate a friend’s birthday, a beautiful night under an almost full moon. We watched This is The End and Fast and Furious 6, and two of us stayed for the 2:00 am screening of World War Z. I’m not a zombie fanatic, so other than watching the Walking Dead, I had few expectations beyond the trailers that have been on TV since the Super Bowl.