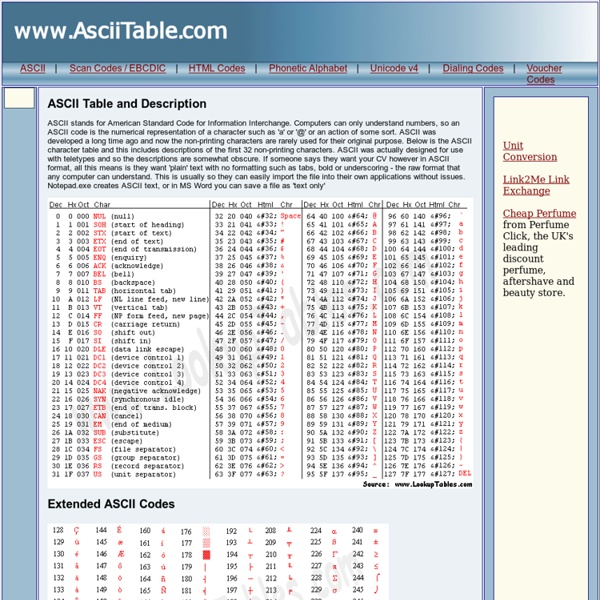 ASCII stands for American Standard Code for Information Interchange. Computers can only understand numbers, so an ASCII code is the numerical representation of a character such as 'a' or '@' or an action of some sort. ASCII was developed a long time ago and now the non-printing characters are rarely used for their original purpose. Below is the ASCII character table and this includes descriptions of the first 32 non-printing characters. ASCII was actually designed for use with teletypes and so the descriptions are somewhat obscure. If someone says they want your CV however in ASCII format, all this means is they want 'plain' text with no formatting such as tabs, bold or underscoring - the raw format that any computer can understand.

Handling character encodings in HTML and CSS (tutorial) Intended audience: HTML and CSS content authors. This material is applicable whether you create documents in an editor, or via scripting. This tutorial gathers together and organizes pointers to articles that, taken together, help you understand how to handle the essential aspects of authoring HTML and CSS related to characters and character encodings. In a nutshell Names of the Greek Gods A Complete List of Greek Gods, Their Names & Their Realms of Influence There have been many Greek gods mentioned across thousands of stories in Greek mythology – from the Olympian gods all the way down to the many minor gods. The gods, much like the Greek goddesses of history, have very exaggerated personalities and they are plagued with personal flaws and negative emotions despite they immortality and superhero-like powers. This page is a list of the names of Greek gods in ancient mythology and their roles. It will be continually updated with additions, corrections and more information on each of the gods.

Batch File to Append Date to file name Batch File to Append Date to file name Saturday 24 Feb, 2007 - 21:49pm | 36 comments | A DOS batch file (file with extension .bat) can be a very effective way to automate a series of file operations. You can schedule the batch file to run at a specific time, and automate, say, a series of operations such as copying, moving, deleting or renaming files. You can create a batch file in any text editor like notepad and just save the file with an extension of .bat. In windows, if you open a DOS prompt, type edit and hit return a retro text editor will open which you can also use.

The Healing Power of Crystals Remember that ultimately these stones represent a broad range of suggestions—perhaps much broader than those you have consulted. Ultimately you must learn to cultivate and develop your intuition and see what you are drawn to using. A healer will be guided to using a different combination of stones for the chakras from client to client, based on his or her intuition, what the client shares, and what has been treated or resolved in previous sessions. As a practitioner starts to work with clients more regularly, records should be kept of the sessions. They may yield wonderful insights for work on other clients. Energy Medicine and Crystal Therapy: The Future

Andrey Tarantsov: Sublime Text Workflow That Beats Coda and Espresso Welcome to the new #WorkflowThu series which helps web developers try new great things. In this episode, we’re talking about jumping into Sublime Text 2 and setting up a workflow that beats traditional tools like Coda and Espresso. Watch the video (10:30) or read the article below. App and plugins mentioned in this video: Character Entities in HTML & XHTML - The Web Standards Project Single characters can be embedded into documents using character entity references. These references have a numeric value as well as a named value. You can use either one just so long as it is allowed within the DTD in question. Using character entities is particularly helpful when the encoding set doesn’t express all the characters that you might want to use in the document. For example, if I were authoring a document in English and wanted to use an inverted exclamation mark for a Spanish quotation, I’d use an entity to create that character. Other character entity references help control space, symbols, and so on.

Emoji Ideograms or smileys used in electronic messages and webpages An emoji, created by the Noto project Emoji (Japanese: , ; Japanese: [emodʑi]; singular emoji, plural emoji or emojis[1]) are ideograms and smileys used in electronic messages and web pages. Emoji exist in various genres, including facial expressions, common objects, places and types of weather, and animals. MS-DOS/MSDOS Batch Files: Batch File Tutorial and Reference Interactive Batch Course with built-in Reference The versatile MS-DOS/MSDOS Batch Language automates routine tasks with Batch files (lists of Batch commands). Learn how to write Batch files with this free , interactive Course and built-in Batch Reference. Resources Recommendations and Kindred Here are some folks and sites I love, recommend, and enjoy… (Disclosure statement: Several are affiliate links, which means I get a bonus if you buy through my link. You never need to use my link if you’d prefer not to – you can always find the site and go directly there.) Angel Sullivan - Creating simple (+ soulful) websites, and reminding you of living magick.