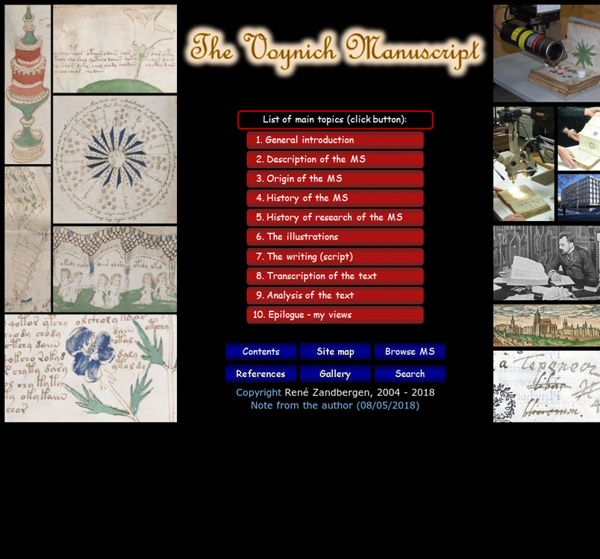 GC1M2NP A Lesson in Ciphers # 1 (Unknown Cache) in Missouri, United States created by TripCyclone This cache series is designed to give you an introduction to the world of ciphers. It will not cover every type of cipher out there, instead focusing on a small variety of different ciphers. Hopefully, you will walk away from solving this series with a new set of puzzle solving skills. And maybe, just maybe, you'll be able to go to that puzzle that's always bothered you and begin to see it with a new pair of eyes. I have designed this series such that you will not be able to solve them all in one swipe. The Voynich Manuscript Decoded? I give examples to show that the code used in the Voynich Manuscript is probably a series of Italian word anagrams written in a fancy embellished script. This code, that has been confusing scholars for nearly a century, is therefore not as complicated as it first appears. All attempts over the past century to decode this mysterious manuscript have met with failure. This is probably due to the initial error made by Voynich and his followers attributing the authorship of the manuscript to Roger Bacon, the 13th century British scientist, monk and scholar. As I showed in a previous paper on my Website, The Voynich Manuscript, was the author left handed?, Roger Bacon could not have written this manuscript and I suggested that a young (around 8 to 10 years old) Leonardo da Vinci was a likely author.

Voynich Manuscript Written in Central Europe at the end of the 15th or during the 16th century, the origin, language, and date of the Voynich Manuscript—named after the Polish-American antiquarian bookseller, Wilfrid M. Voynich, who acquired it in 1912—are still being debated as vigorously as its puzzling drawings and undeciphered text. Described as a magical or scientific text, nearly every page contains botanical, figurative, and scientific drawings of a provincial but lively character, drawn in ink with vibrant washes in various shades of green, brown, yellow, blue, and red. For a complete physical description and foliation, including missing leaves, see the Voynich catalog record.

en.wikibooks.org Welcome[edit] A floral illustration on page 32. The colors are still vibrant. The Voynich manuscript, described as "the world's most mysterious manuscript",[1] is a work which dates to the early 15th century, possibly from northern Italy.[2][3] It is named after the book dealer Wilfrid Michael Voynich, who purchased it in 1912. Some pages are missing, but the current version comprises about 240 vellum pages, most with illustrations. Much of the manuscript resembles herbal manuscripts of the time period, seeming to present illustrations and information about plants and their possible uses for medical purposes. MP3Stego When looking at the steganographic tools available on the Net, it occurred to me that nothing had been done to hide information in MP3 files, that is sound tracks compressed using the MPEG Audio Layer III format. There is a growing interest world-wide in MP3 or indeed WMA files because they offer near-CD quality at compression ratio of 11 to 1 (128 kilobits per second). This gives a very good opportunity for information hiding.

Voynich Manuscript Based on the evidence of the calligraphy, the drawings, the vellum, and the pigments, Wilfrid Voynich estimated that the Manuscript was created in the late 13th century. The manuscript is small, seven by ten inches, but thick, nearly 235 pages. It is written in an unknown script of which there is no known other instance in the world.

Cryptography When I wrote my first book, Fermat’s Last Theorem, I made a passing reference to the mathematics of cryptography. Although I did not know it at the time, this was the start of a major interest in the history and science of codes and code breaking, which has resulted in a 400-page book on the subject, an adaptation of the book for teenagers, a 5-part TV series, numerous talks and lectures, the purchase of an Enigma cipher machine and the development of an interactive crypto CD-ROM. In the Crypto Corner, you will find details about my book on cryptography (The Code Book), information about my TV series based on the book (The Science of Secrecy) and you can explore the Black Chamber, which is an interactive encryption and codebreaking section. You will also find a section about the Cipher Challenge, there are some cryptograms (coded messages) for you to try and crack, a free downloadable CD-ROM version of The Code Book, and a quick Q&A based on the questions I am most often asked.

The Voynich Manuscript Decoded? I give examples to show that the code used in the Voynich Manuscript is probably a series of Italian word anagrams written in a fancy embellished script. This code, that has been confusing scholars for nearly a century, is therefore not as complicated as it first appears. All attempts over the past century to decode this mysterious manuscript have met with failure. This is probably due to the initial error made by Voynich and his followers attributing the authorship of the manuscript to Roger Bacon, the 13th century British scientist, monk and scholar.

Sharky's Vigenere Cipher This page is for amusement only. Instructions are given below this form. instructions: Enter the string to encrypt or decrypt in the Input field (you may copy and paste it from another text editor). voynich John Baez January 30, 2005 The Voynich manuscript is the most mysterious of all texts. It is seven by ten inches in size, and about 200 pages long. It is made of soft, light-brown vellum. Keyed Caesar One variation to the standard Caesar cipher is when the alphabet is "keyed" by using a word. In the traditional variety, one could write the alphabet on two strips and just match up the strips after sliding the bottom strip to the left or right. To encode, you would find a letter in the top row and substitute it for the letter in the bottom row. The Voynich Manuscript The Voynich Manuscript has been dubbed "The Most Mysterious Manuscript in the World". It is considered a Manuscript codex and dates to the early 15th century (1404-1438), possibly created in northern Italy. It is named after the book dealer Wilfrid Voynich, who purchased it in 1912. Some pages are missing, but there are now about 240 vellum pages, most with illustrations. It's size is 23.5 by 16.2 by 5 centimetres (9.3 by 6.4 by 2.0 in). Much of the manuscript resembles herbal manuscripts of the 1500s, seeming to present illustrations and information about plants and their possible uses for medical purposes.

Home - www.simplesite.com/the_runes “For me the magic moment came on page 2 where the green picture could mean any of three things. I identified the picture almost at once but could not see in which of the three directions it might go. And I knew that I had to find out!” “This should come with a warning label on it. ...It's highly additive. I've put it down with good intentions of getting back to life and work. But I couldn't keep away!

As far as the Voynich Manuscript, the vast majority of researchers focused on trying to decipher the code letter. Great respect for them. According to me , the text is intentionally used a hoax aimed to engage readers in a fruitless search for the code of the manuscript just as deliberately scattered like puzzle Centuries of Nostradamus. I am in my searches focused on the symbolic meaning of illustration. For someone who has only a scientific look at the issue of encryption, all suggest it may seem too unreliable, not falsifiable. Manuscript, namely the part of Herb is, according to me, a compendium of knowledge about the Evolution of Life on Earth - from its cosmological aspect, through Human Evolution (Theory Darwin ) to the Prehistory, History and Contemporary. In the following section, the author Herb encrypted all the important events of our common history with such precision that many a textbook of history might have envied accuracy. For more information: by grzegorzostrowski Feb 2