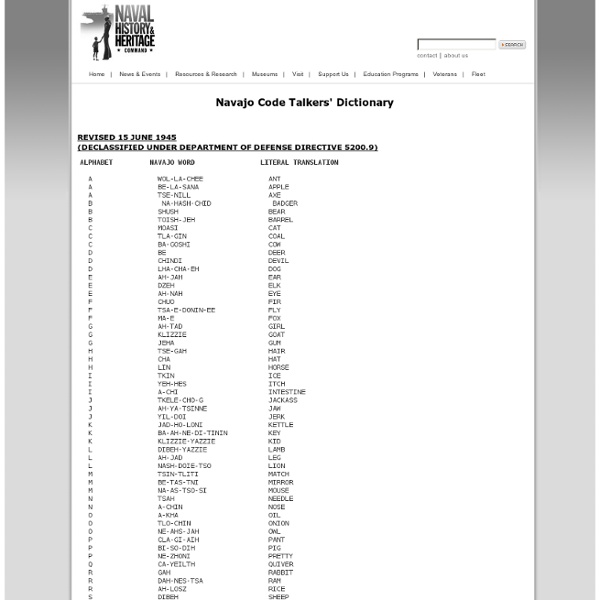 Sharky's Vigenere Cipher This page is for amusement only. Instructions are given below this form. instructions: Enter the string to encrypt or decrypt in the Input field (you may copy and paste it from another text editor). Enter the key in the Key field. (You may use any sequence of characters, but only alphabetic characters will actually be processed. On most computers: To copy: Highlight text, press Ctrl-C; To paste: Position cursor, press Ctrl-V. explanation: Vigenere coding is one of the most ancient forms of cryptography. Choose a key that is as long as the plaintext message. Unfortunately, these steps take all the fun out of the Vigenere cipher. Vigenere ciphers with moderate keys are appropriate for situations that do not require failproof security. We hope you enjoy this simple JavaScript-based implementation.

Guardianship of the environment that supports our culture Tapu te Ranga Marae Island Bay, Wellington. www.taputeranga.maori.nz The Tapu te Ranga Marae in Island Bay, Wellington is a special place. It is the home of Bruce Stewart who with friends purchased the land, deposited it into a trust for future generations and now with many helpers is restoring it to a place of beauty and love. Click here for the story of courage and determination that made this place possible against all the odds Read a story written for our French Readers. He says "We need all people to have a place to practice their kaitiakitanga within their own community" People from Wellington and around the world participate on the environmental programmes and other activities offered here. An interview with Bruce where he talks about Kaitiakitanga (published in Green Anarchy) The Hillside that is being replanted and is bringing back the birds to Island Bay in Wellington City. Visit their own new website:

15 Free Language Learning Resources Online In our increasingly global culture, being able to communicate with people from diverse backgrounds is quickly becoming more important than ever. Whether you’re learning English as a second language, or broadening your horizons with Spanish, Russian, Chinese, or Swahili, there is a site out there with free lessons you can access from the comfort of your own home! Here’s a list of free online language learning resources we thought were particularly helpful: Livemocha – With over 11 million members, Livemocha offers both free and paid language courses in over 25 different languages. There is couple of great things about Livemocha’s approach to online learning. Please submit any good resource you know , if i miss, in the comments section.

Arctolatry Alan Turing Scrapbook - The Enigma War Alan Turing and the Battle of the Atlantic The Bombe was used with success from the summer of 1940 onwards, to break messages enciphered on the simpler Enigma system used by the German Air Force. But the most important messages were those to and from the U-boat fleet, and these were enciphered on a much more secure Enigma system. Alan Turing took on this problem, going against the prevailing view that it would prove unbreakable. See the October 1940 Operation Ruthless plan devised by Ian Fleming, later the creator of 'James Bond', to capture such information for Turing's work. The breakthrough came in February 1941, with the capture of papers from the Krebs off Norway. From then on, with the help of some further captures, the U-boat communications were effectively mastered. The naval Enigma was more complicated than those of the other German services, using a stock of eight rather than five rotors. See Steve Hosgood's page on 'Banburismus' for a detailed description of the whole process.

GC1M2NP A Lesson in Ciphers # 1 (Unknown Cache) in Missouri, United States created by TripCyclone This cache series is designed to give you an introduction to the world of ciphers. It will not cover every type of cipher out there, instead focusing on a small variety of different ciphers. Hopefully, you will walk away from solving this series with a new set of puzzle solving skills. I have designed this series such that you will not be able to solve them all in one swipe. Cryptography is defined as the practice and study of hiding information. For your first lesson, we'll use a cipher that I am certain ALL OF YOU have used already. abeguguveglrvtugqrterrfsvsglsbhecbvaggjbbarguerr jrfgavarglsbheqrterrfguveglguerrcbvagmrebsviravar You are looking for a small lock 'n lock container.

The 100 Most Beautiful Words in English ere are the 100 most beautiful words in English. How do we know we have the most beautiful? They were chosen by Robert Beard, who has been making dictionaries, creating word lists, and writing poetry for 40 years. For five years he wrote the Word of the Day at yourDictionary.com and since 2004 he has written up 1500 words in the series, So, What's the Good Word? here at alphaDictionary. Below is a select list of his favorite words that he used in his poetry—or wishes he had. Dr. The words in this book will decorate your articles, essays, blogs, term papers, memos, love letters-even conversations with those we love.

National Cryptologic Museum The National Cryptologic Museum is the National Security Agency's principal gateway to the public. It shares the Nation's, as well as NSA's, cryptologic legacy and place in world history. Located adjacent to NSA Headquarters, Ft. George G. Originally designed to house artifacts from the Agency and to give employees a place to reflect on past successes and failures, the Museum quickly developed into a priceless collection of the Nation's cryptologic history. Being the first and only public museum in the Intelligence Community, the Museum hosts approximately 50,000 visitors annually from all over the country and all over the world, allowing them a peek into the secret world of codemaking and codebreaking. The Museum is also an invaluable educational tool, benefiting thousands of students and teachers every year. The Museum has been featured in a plethora of international TV, print, and radio media and has hosted visitors and dignitaries from around the world.

MP3Stego When looking at the steganographic tools available on the Net, it occurred to me that nothing had been done to hide information in MP3 files, that is sound tracks compressed using the MPEG Audio Layer III format. There is a growing interest world-wide in MP3 or indeed WMA files because they offer near-CD quality at compression ratio of 11 to 1 (128 kilobits per second). This gives a very good opportunity for information hiding. Although WMA has better quality in general, I did not have access to code and only an implementation for MP3 is provided as a proof of concept. MP3Stego will hide information in MP3 files during the compression process. The hiding process takes place at the heart of the Layer III encoding process namely in the inner_loop. We have discussed earlier the power of parity for information hiding.