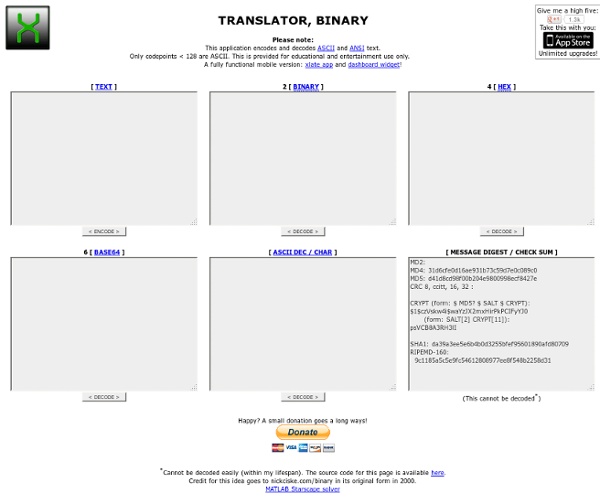 CrypTool-Online The origins of modern cryptography date back approximately 3000 years. The procedures used to encrypt messages before 1900 were primitive compared to modern approaches, but they are easy to understand and provide a good basis to study the more complicated methods. In recent times, especially after the emergence of telecommunication equipment, more complex encryption methods have become necessary. Today, an exorbitant amount of information is transmitted via the internet. Millions of people use websites for their banking activities causing the transmission of sensible data via networks where the precise routing of data is not always known and data may be manipulated or stolen. This website gives you the opportunity to learn about ciphers and to test them in an interactive way within your browser.

Quick Story Idea Generator Stories The theme of this story: dark quest. The main characters: unbalanced hero and humble secret agent. The major event of the story: repentance. The theme of this story: light-hearted horror. The main characters: charismatic heir and negative champion. Lots of Jokes - Did You Know? Q. Why do men's clothes have buttons on the right while women's clothes have buttons on the left? A. When buttons were invented, they were very expensive and worn primarily by the rich. nvert Base 64 encoded data to ASCII Text Go to Base64 Convertor What is Base 64 Encoded Data? Put simply, base64 encoded data is a string of character that contains only a-z, A-Z, 0-9, + and / characters and is often used in situations when sending non-text information via a text only transmission protocol.

Freeware Hex Editor XVI32 [Overview] [Features] [What's New] [Screenshots] [User Reviews] [Download] [Installation] [Other Freeware] [Home] Overview XVI32 is a freeware hex editor running under Windows 9x/NT/2000/XP/Vista/7. Wind Map An invisible, ancient source of energy surrounds us—energy that powered the first explorations of the world, and that may be a key to the future. This map shows you the delicate tracery of wind flowing over the US. The wind map is a personal art project, not associated with any company.

30+ Hardly Found Actually Funny Illustrations and Few Tutorials Wanted to do something fun today. Had to do a lot of collection in order to find the best illustration that can actually are funny. Trust me there were not many who could actually meet the criteria of being funny. Anyhow, after so much effort I had to give out something so, to keep the post worthy other than couple of laughs I thought of combining it with some useful illustration tutorials. So, if the illustration don’t give you a good laugh then try to avail the opportunity to learn and create one real funny illustration of your owns. You don’t know how creative you can be, it is just a matter of thinking and doing. Adyghe – ISO 9 transliteration system Adyghe – ISO 9 transliteration system Adyghe virtual keyboard The Adyghe virtual keyboard allows you to enter characters with a click of your mouse. There’s no need to change your keyboard layout anymore. The transliteration of each supported character is displayed on the right side of the character. You can then directly transliterate your text from one script to the other according to the selected transliteration system.

Arikara numbers Enter a number and get it written in full in Arikara. Language overview Arikara is an indigenous language of North America, belonging to the Caddoan languages family. 13 killer Chrome apps to replace your desktop software When Tim Berners-Lee invented the first Web browser in 1990, it was just an application made to read HTML pages passively. Fast-forward to today, and the modern Web browser has become a powerful platform in itself—almost a miniature operating system, capable of running complex JavaScript code and interacting with Flash plug-ins. Indeed, Web pages have evolved into Web apps, to the point where we can do much of our productivity work in a browser window without ever having to invest in traditional desktop software. But how much work can you really do from a browser?

mad in crafts: DIY Fire & Ice Lanterns - StumbleUpon The old becomes new: A new variation on the outdoor lantern. We have had an unusually warm winter in Michigan this year, and while the temps have been nice, I have had to hold off on this project idea until we got a cold snap. We finally got some snow and cold earlier this week, so I was able to try out this fun winter project.

This application encodes and decodes ASCII and ANSI text. Only codepoints < 128 are ASCII. by drone Jun 2