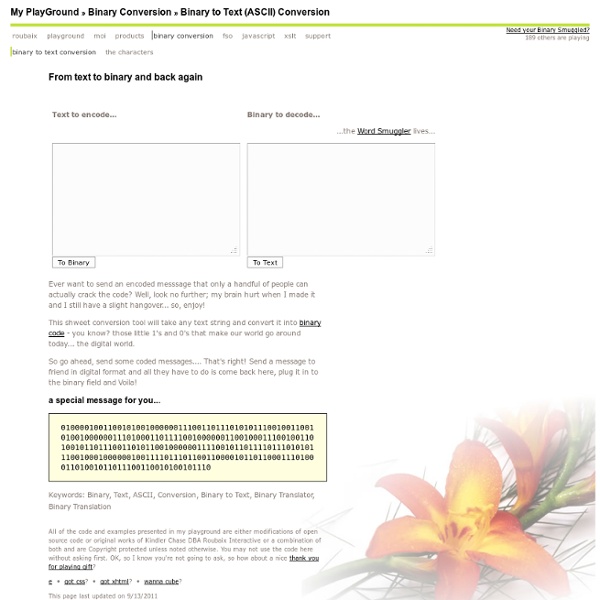 Processing Conversion to Text... Ever want to send an encoded messsage that only a handful of people can actually crack the code? Well, look no further; my brain hurt when I made it and I still have a slight hangover... so, enjoy! This shweet conversion tool will take any text string and convert it into binary code - you know? those little 1's and 0's that make our world go around today... the digital world. So go ahead, send some coded messages....

HTML Compressor - Reduce the size of HTML, CSS, JavaScript, PHP and Smarty code. You need to enable JavaScript to use this website. Choosing the correct Code Type makes the compression of your code more safe and effective. Choosing the wrong option may lead to fewer optimizations or errors. Ken Burns effect These images illustrate the Ken Burns effect. Demonstration of the Ken Burns Effect in video form. The name derives from extensive use of the technique by American documentarian Ken Burns. The technique predates his use of it, but his name has become associated with the effect in much the same way as Alfred Hitchcock is associated with the Hitchcock zoom.[citation needed] The feature enables a widely used technique of embedding still photographs in motion pictures, displayed with slow zooming and panning effects, and fading transitions between frames.

HTML Tip: Centering Images Is Harder Than You Think HTML Tip: Centering Images Is Harder Than You Think by Larisa Thomason, Senior Web Analyst, NetMechanic, Inc. We frequently get questions from subscribers who are having problems centering images - particularly when they're mixing the ALIGN attribute with style sheet properties. There are two main causes: HTML rules and browser compatibility issues. Some Elements Center, Others Don't! XHTML Character Entity Reference This page contains the 252 allowed entities in HTML 4 and XHTML 1.0, as outlined in section 24 of the official HTML 4 specifications, published by the W3C. If you find it helpful we'd really appreciate a social share! Each entity is contained within a small box that contains four lines:

Customize your Web with free add-ons Firefox's toolbar provides easy access to common features. Do you miss something you use a lot? The toolbar is easy to customize. Comparison of web application frameworks From Wikipedia, the free encyclopedia This is a comparison of notable web frameworks. General[edit] Basic information about each framework. Permissions In FreeBSD, every file and directory has an associated set of permissions and several utilities are available for viewing and modifying these permissions. Understanding how permissions work is necessary to make sure that users are able to access the files that they need and are unable to improperly access the files used by the operating system or owned by other users. This section discusses the traditional UNIX® permissions used in FreeBSD.

Free HTML Tag Generator Look how easy we make it to edit your website - without having to know HTML code! Also, you won't be interfering with the page layout with this type of edit, minimizing risk of doing this. HTML editor quick instructions: Type your textUse the buttons to format.(Highlight some text - then use the buttons to change the font or color or make it bold.) 59 Open Source Tools That Can Replace Popular Security Software — Datamation.com It's been about a year since we last updated our list of open source tools that can replace popular security software. This year's list includes many old favorites, but we also found some that we had previously overlooked. In addition, we added a new category -- data loss prevention apps. With all the attention generated by the WikiLeaks scandal, more companies are investing in this type of software, and we found a couple of good open source options.

Booting In computing, booting (or booting up) is the initialization of a computerized system. The system can be a computer or a computer appliance. The booting process can be "hard", after electrical power to the CPU is switched from off to on (in order to diagnose particular hardware errors), or "soft", when those power-on self-tests (POST) can be avoided. Soft booting can be initiated by hardware such as a button press, or by software command. Booting is complete when the normal, operative, runtime environment is attained.

Baudot code The Baudot code, invented by Émile Baudot,[1] is a character set predating EBCDIC and ASCII. It was the predecessor to the International Telegraph Alphabet No. 2 (ITA2), the teleprinter code in use until the advent of ASCII. Each character in the alphabet is represented by a series of bits, sent over a communication channel such as a telegraph wire or a radio signal.

Basic vi Commands What is vi? The default editor that comes with the UNIX operating system is called vi (visual editor). [Alternate editors for UNIX environments include pico and emacs, a product of GNU.] The UNIX vi editor is a full screen editor and has two modes of operation: Command mode commands which cause action to be taken on the file, and Insert mode in which entered text is inserted into the file. In the command mode, every character typed is a command that does something to the text file being edited; a character typed in the command mode may even cause the vi editor to enter the insert mode.