Art of Failure. The Art of Failing in School and Succeeding in Life. A young man was restless in his studies. 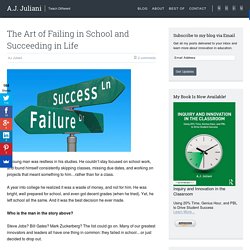 He couldn’t stay focused on school work, and found himself consistently skipping classes, missing due dates, and working on projects that meant something to him…rather than for a class. A year into college he realized it was a waste of money, and not for him. He was bright, well prepared for school, and even got decent grades (when he tried). The Art of Failure. Why some people choke and others panic. 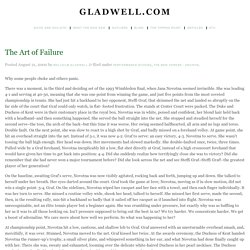 There was a moment, in the third and deciding set of the 1993 Wimbledon final, when Jana Novotna seemed invincible. She was leading 4-1 and serving at 40-30, meaning that she was one point from winning the game, and just five points from the most coveted championship in tennis. She had just hit a backhand to her opponent, Steffi Graf, that skimmed the net and landed so abruptly on the far side of the court that Graf could only watch, in flat- footed frustration. The stands at Center Court were packed. The Duke and Duchess of Kent were in their customary place in the royal box. Middlebury Institute of International Studies at Monterey. Courses offered in the past four years. ▲ indicates offered in the current term▹ indicates offered in the upcoming term[s] Success, the high altar of our culture. 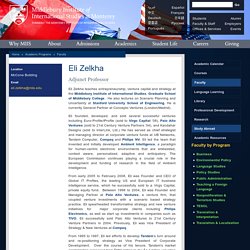 Failure, the dungeon of our culture. But our success culture is in deep and fundamental conflict with entrepreneurship, innovation, risk-taking, learning and, inextricably, failure. Success without failure is simply …. luck. MISQE%209-05.pdf. A risk-management plan to help prevent financial crises. The magnitude of the current financial crisis reflects the failure of an economic and regulatory philosophy that proved increasingly influential in policy circles during the past three decades. 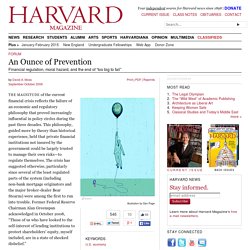 This philosophy, guided more by theory than historical experience, held that private financial institutions not insured by the government could be largely trusted to manage their own risks—to regulate themselves. The crisis has suggested otherwise, particularly since several of the least regulated parts of the system (including non-bank mortgage originators and the major broker-dealer Bear Stearns) were among the first to run into trouble. Being a Successful Failure. How do we fail successfully? 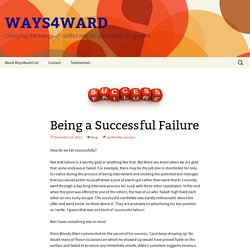 Not that failure is a worthy goal or anything like that. But there are times when we are glad that some endeavour failed. For example, there may be the job one is shortlisted for only to realise during the process of being interviewed and meeting the potential line manager that you would prefer to quaff down a pint of warm spit rather than work there! I recently went through a day long interview process for a job with three other candidates. In the end when the post was offered to one of the others, the two of us who ‘failed’ high fived each other on our lucky escape. FMEA. 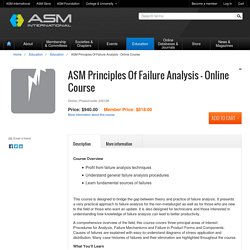 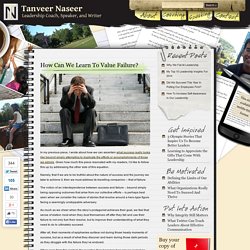 In my previous piece, I wrote about how we can ascertain what success really looks like beyond simply attempting to duplicate the efforts or accomplishments of those we admire. Given how much this piece resonated with my readers, I’d like to follow this up by addressing the other side of this equation. Namely, that if we are to be truthful about the nature of success and the journey we take to achieve it, then we must address its travelling companion – that of failure. The notion of an interdependence between success and failure – beyond simply being opposing outcomes that arise from our collective efforts – is perhaps best seen when we consider the nature of stories that revolve around a hero-type figure facing a seemingly unstoppable adversary.

Steve Nowicki: The Value of Failure. Editor's Note: Steve Nowicki is professor of biology and dean of undergraduate education. 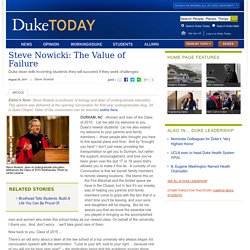 This speech was delivered at the opening convocation for first-year undergraduates Aug. 24 in Duke Chapel. Video of the convocation can be watched online here. The Importance of Failure. OCTOBER 26, 2011 by STEVEN HORWITZ, JACK KNYCH Filed Under : Knowledge Problem, Entrepreneurship, Subsidies, Competition In today’s society failure has become something to fear, avoid, and therefore prevent at all costs. 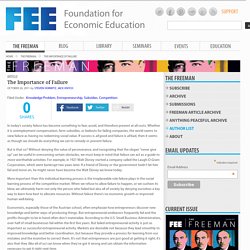 Whether it is unemployment compensation, farm subsidies, or bailouts for failing companies, the world seems to view failure as having no redeeming social value. Got Success? Or Failure? We like to mark the progress of our lives by our successes: learning to walk, beginning or graduating from school, earning an award, making a discovery, starting a business, getting married, having a child, beating an illness, winning a game, earning a promotion or a good review or an admired person’s approval. 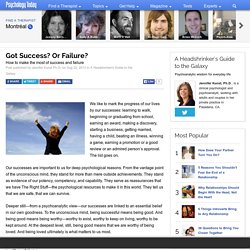 The list goes on. Our successes are important to us for deep psychological reasons. Failing Forward: 7 Stories of Success Through Failure.