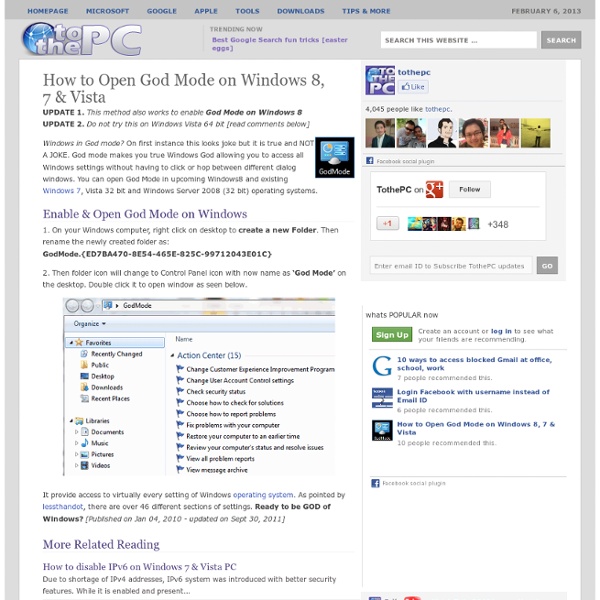 10 programming languages that could shake up IT Do we really need another programming language? There is certainly no shortage of choices already. Between imperative languages, functional languages, object-oriented languages, dynamic languages, compiled languages, interpreted languages, and scripting languages, no developer could ever learn all of the options available today. And yet, new languages emerge with surprising frequency. Some are designed by students or hobbyists as personal projects. plusone-button Documentation You can add and customize the +1 button to meet the needs of your website, such as modifying the button size and load technique. By adding the +1 button to your website, you allow your users to recommend your content to their circles and drive traffic to your site. The +1 button can also improve the time spent on your site by providing recommendations for further reading.

Windows IPv4 Networks Vulnerable To IPv6 Attack A man-in-the-middle attack can use the IPv6 protocol to eavesdrop on IPv4 networks, though an attacker would have to physically place a router in the targeted environment for it to work. (click image for larger view) Slideshow: 10 Massive Security Breaches The 50 Best Registry Hacks that Make Windows Better We’re big fans of hacking the Windows Registry around here, and we’ve got one of the biggest collections of registry hacks you’ll find. Don’t believe us? Here’s a list of the top 50 registry hacks that we’ve covered. It’s important to note that you should never hack the registry if you don’t know what you’re doing, because your computer will light on fire and some squirrels may be injured. Also, you should create a System Restore point before doing so.

Blue screen of death (STOP error) information in dump files. Related Utilities WinCrashReport - Displays a report about crashed Windows application. WhatIsHang - Get information about Windows software that stopped responding (hang) AppCrashView - View application crash information on Windows 7/Vista. See Also 7 Lessons: Surviving A Zero-Day Attack - Security - Attacks/breaches Pacific Northwest National Laboratory CIO Jerry Johnson takes you inside the cyber attack that he faced down--and shares his security lessons learned. When Pacific Northwest National Laboratory detected a cyber attack--actually two of them--against its tech infrastructure in July, the lab acted quickly to root out the exploits and secure its network. PNNL then did something few other cyber attack victims have been willing to do.

Why programmers work at night [This essay has been expanded into a book, you should read it, here] Image via Wikipedia A popular saying goes that Programmers are machines that turn caffeine into code. And sure enough, ask a random programmer when they do their best work and there’s a high chance they will admit to a lot of late nights. Some earlier, some later. A popular trend is to get up at 4am and get some work done before the day’s craziness begins.

Founder's Blog - Jitbit: Chinese Magical Hard-Drive This is Founder's blog - Subscribe - About Apr 7 2011 A Russian friend of mine has posted this absolutely amazing story. He works at a hard-drive repair center in a Russian town right next to the Chinese border. Manage your Android phone from your browser May 09, 2012, 5:31 PM — Here's how you can manage your Android phone wirelessly from your browser with a free app called AirDroid. 1. Go to the AirDroid page on the Google Play store. 2. Click the Install button. Ray Kurzweil Raymond "Ray" Kurzweil (/ˈkɜrzwaɪl/ KURZ-wyl; born February 12, 1948) is an American author, computer scientist, inventor, futurist, and is a director of engineering at Google. Aside from futurology, he is involved in fields such as optical character recognition (OCR), text-to-speech synthesis, speech recognition technology, and electronic keyboard instruments. He has written books on health, artificial intelligence (AI), transhumanism, the technological singularity, and futurism. Kurzweil is a public advocate for the futurist and transhumanist movements, as has been displayed in his vast collection of public talks, wherein he has shared his primarily optimistic outlooks on life extension technologies and the future of nanotechnology, robotics, and biotechnology.

CIA, Mossad made up fairytale al-Qaeda CIA, Mossad made up fairytale al-Qaeda Wayne Madsen An American investigative journalist says the al-Qaeda is a fairytale terrorist group made up by the Central Intelligence Agency (CIA) and the Israeli spy agency, Mossad. "In the US, the Zionist propagandists are spinning the fanciful tale that Iran was involved with "al-Qaeda," the fairy tale organization concocted by Mossad and the CIA, in carrying out the 9/11 attacks," Wayne Madsen wrote in an article published in Global Research. Madsen was referring to the latest US allegation that Iran was involved in the September 11, 2001 attacks on New York and Washington.

How to Prevent Image Bandwidth Theft With .htaccess Protect your images from being linked by other websites while you pay the bandwidth! by Christopher Heng, thesitewizard.com If your website displays beautiful pictures, you may encounter the ugly situation where your photos and other images are used without your permission on other sites. Even worse, those websites "hotlink" your pictures, that is, they don't host the pictures directly on their site, but embed them into their pages by linking to the copy on your site. This way, not only do they infringe your copyright, but they also make you pay for their bandwidth.