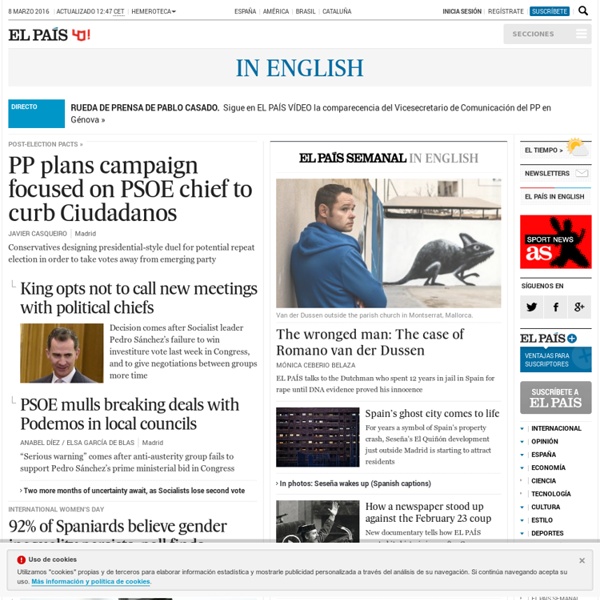 Earthquake measuring 5.4 on Richter scale shakes central Spain The epicenter of the tremor, which took place at 5.16pm, was located in Albacete province. The effects were felt in a number of provinces, including Madrid Legal watchdog opens probe into payments made to Madrid judges Move comes in response to revelations by EL PAÍS that the regional government was paying magistrates for collaborating on project to improve court IT systems through consulting firm Indra Closure of Basque association marks end of anti-ETA movement With the terrorist group’s activities seemingly over, civic groups such as Lokarri say their job is done Alonso under observation in hospital after testing crash The F1 driver’s agent confirms the former world champion has no injuries and suggests the incident was caused by strong winds Ukrainians adopted by Spanish families may have to go to war Victims of the Chernobyl disaster living in Spain are receiving call-up letters from Kiev. defense

ENGAMES Countable and uncountable nouns When I speak with native speakers of English they often tell me that the concept of countability in English is absolutely natural. “You simply know which noun is countable and which is not.” However, this natural feeling is nearly impossible to teach. Based on my experience I have created the following mind map where I try to set some rules to help the learners of English. The rules given here are in no way foolproof but I hope they will help a bit. Countable or Uncountable – mind map Generate your very own Secret Service code name The most energized Jeb Bush has been for the entirety of the still-amazingly young 2016 election cycle came when he finally landed a good counterpunch against Donald Trump. During CNN's 14-hour-long debate/telethon Wednesday night, each of the 11 top candidates was asked what he or she would like to be called by the Secret Service if elected president. (President Obama's code name is "Renegade," for example.) Bush seemed to be ready for the question. "Eveready," he offered -- and then turned to his right. "It's very high-energy, Donald."

10 English Words with the most multiple meanings – Part 1 José is in his third and final week with me on a home stay full immersion course and has come to the conclusion that the English Language is extremely confusing and frustrating! Especially when it comes to all those words that have multiple meanings. I have to confess that he has got a point. Take the word “run” for example.

Yattendon Coordinates: Yattendon is a village and civil parish 7 miles (11 km) northeast of Newbury, Berkshire. The M4 motorway passes about 0.5 miles (800 m) south of the village. Geography[edit] www.oxforddictionaries.com/top1000/english A British & World English …The first letter of the alphabet… ability British & World English …Possession of the means or skill to do something… able British & World English J & J Books and Coffee J & J opened in Dec '03, but the idea began months earlier. As an American living in Madrid, Jamie says the thing she missed the most was being able to curl up in a big chair with a mocha in one hand and several books to read in her lap. So together with her husband, Javi, they moved to Los Angeles to buy thousands (and I mean thousands!) of books from used bookstores, libraries sales, yard sales and anywhere else they could find good used books. Then they returned to Madrid to convert a Chinese restaurant into their dream Bookstore/Coffee shop. Now it's a great success.

33 ways to speak better English – without taking classes If you’re reading this, I imagine you want to speak better English and communicate in a more confident and competent way. When we communicate effectively we are able to express our ideas and opinions, share experiences, and build relationships with others. When we struggle to express ourselves, we feel unvalued and insecure. As human beings, we want to participate in group discussions and have an impact on the society around us. In the modern world, we communicate across borders. English is the closest thing we have to an international language. Diction Exercises - Tongue Twisters to Learn How to Speak Clearly - articulation drills to make sure they get your message Why should you do diction exercises? Because your speech content may be great, you may look fantastic but unless your audience can UNDERSTAND what you're saying, your message is lost. 697Save Diction exercises will help you learn how to speak clearly. An athlete does warm-ups and stretches before an event: a singer does likewise.