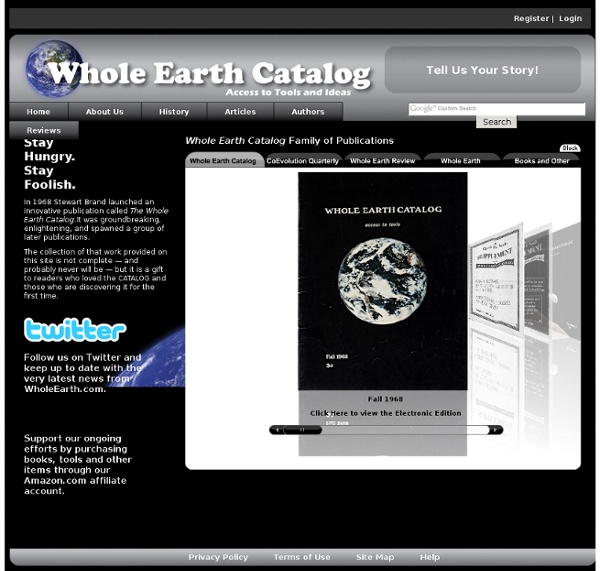 Apple on Thinking Differently: Apple’s ‘s 1997 ‘Think Different’ Advertising Campaign I decided recently that it’s time to get this blog focused a little more on … helping people think differently. So, I’ve been thinking quite a bit lately about just what exactly it means to “think differently” (and I list 12 ways to think differently below). The meaning of ‘think differently” is not as simple as it sounds! Architectural Visualization Recordings from CG School Looking for On-Site and Online Courses? - Click on the “Purchase” link to purchase the videos. - Click on “Recorded Course” to view details about the recording. *Includes 3.5 Hours of V-Ray 2.0 Training for Free ($99 Value) Multiple discounts are automatically provided when you register for multiple recordings when you purchase online.

The Whole Earth Catalog Effect [Header = Intro] In the opening pages of The Electric Kool-Aid Acid Test, Tom Wolfe describes “a thin blond guy with a blazing disk on his forehead,” wearing “just an Indian bead necklace on bare skin and a white butcher’s coat with medals from the King of Sweden on it.” This guy is Stewart Brand, a Stanford-educated biologist and an ex–Army paratrooper turned Ken Kesey cohort and fellow merry prankster who, in 1966, at age 28, had launched a nationwide campaign to convince nasa to release for the first time a photo of the entire planet taken from space. (He made buttons reading “Why Haven’t We Seen a Photograph of the Whole Earth Yet?” and hitchhiked around the country selling them.)

Useful and Fun things to do with the Ubuntu Terminal  If you're new here, you may want to subscribe to my RSS feed and if you have questions related to your ubuntu system post question to our forums. Thanks for visiting! Sponsored Link I want to learn 3D animation?from where i should start It does not matter all too much which 3d animation package you use, whether Lightwave, Maya, Max, XSI, Cinema 4D, Houdini or Blender. What is important is a general understanding of the 3d animation workflow: modeling, texturing (materials), rigging a character, lighting, animation and rendering/compositing techniques. Start with simple projects, and work you way up from there. If you are aiming for a job, it might be a good idea to specialize in one or two disciplines (Maya and 3dsMax are kinda standard issue). Also, decide on what you like best - character animation, architectural visualization, medical animation, etcetera to name just a few fields.

The WELL The Whole Earth 'Lectronic Link, normally shortened to The WELL, is one of the oldest virtual communities in continuous operation. As of June 2012, it had 2,693 members.[2] It is best known for its Internet forums, but also provides email, shell accounts, and web pages. The discussion and topics on the WELL range from deeply serious to trivial, depending on the nature and interests of the participants. History[edit] In August 2005 Salon Media Group announced that it was looking for a buyer for the WELL, in order to concentrate on other business lines. Web World Wide » 50 Free Internet Tools for Tin-Foil Hat Wearers If your wardrobe includes a shiny tin-foil hat, then you will love these free Ma Internet tools. Whether you want to protect yourself from Internet snoopers, want to spy on those out to get you, or want to be able to track trends that you know will lead to something big, then these tools will help you get the job done. Without a Trace If you want to use the Internet without anyone knowing who you are or leave an untraceable phone number, then these tools are for you.

Social contract In moral and political philosophy, the social contract or political contract is a theory or model, originating during the Age of Enlightenment, that typically addresses the questions of the origin of society and the legitimacy of the authority of the state over the individual.[1] Social contract arguments typically posit that individuals have consented, either explicitly or tacitly, to surrender some of their freedoms and submit to the authority of the ruler or magistrate (or to the decision of a majority), in exchange for protection of their remaining rights. The question of the relation between natural and legal rights, therefore, is often an aspect of social contract theory. The Social Contract (Du contrat social ou Principes du droit politique) is also the title of a 1762 book by Jean-Jacques Rousseau on this topic. Overview[edit]

Whole Earth Catalog The first color image of Earth, a composite of images taken in 1967 by the ATS-3 satellite, was used as the cover image of Whole Earth Catalog's first edition. The Whole Earth Catalog (WEC) was an American counterculture magazine and product catalog published by Stewart Brand several times a year between 1968 and 1972, and occasionally thereafter, until 1998. The magazine featured essays and articles, but was primarily focused on product reviews. The editorial focus was on self-sufficiency, ecology, alternative education, "do it yourself" (DIY), and holism, and featured the slogan "access to tools". While WEC listed and reviewed a wide range of products (clothing, books, tools, machines, seeds, etc.), it did not sell any of the products directly.