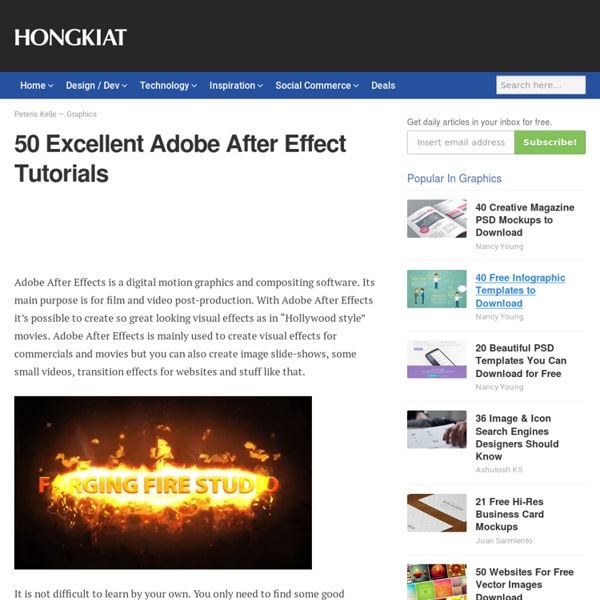 How to stop DNS leakage while using a VPN The DNS leakage problem explained Whenever you type a domain name, your Internet browser contacts a DNS server and makes a DNS Query. Most Virtual Private Network providers fail to mention that while your connexion is encrypted using a VPN there is a high chance that a DNS leak will occur and your ISP will still be able to see what you are doing over the internet. 52 amazing After Effects tutorials Want to know how to do something in After Effects? The web is brimming with tutorials for people wanting to learn about Adobe Creative Cloud's 3D, motion graphics and animation software. But sometimes it can be an uphill struggle finding the tutorial that's right for you.

The Ultimate Motion Graphics Tutorials Round-Up Advertisement Many companies try to create a great experience for customers. But few are willing to make the changes required to deliver on that promise. In fact most don’t even realize just how bad their experience can be. 15 Amazing Interactive Installations Feb 21 2010 By Romain Colin Here is something for a slow lousy Sunday: in this inspirational round-up we feature some outstanding interactive installations that explore the art of interaction between environment, users and machines. Extraordinary artworks. Take a look at 15 beautiful examples of interactive installations: experiments, motions, applications and more. Installations / Applications

Phantom - System for generic, decentralized, unstoppable internet anonymity The Phantom protocol is a system for decentralized anonymization of generic network traffic. It has been designed with the following main goals in mind: 1. Completely decentralized. - No critical or weak points to attack or put (il)legal pressure on. 2. Fusion 7 now free and coming to Mac: complete version of the After Effects and Nuke rival given away by Blackmagic Want to get your hands on a new VFX tool without spending a penny? Well, today Blackmagic has surprised the video industry by releasing the brand new version of Fusion for free. Download Fusion 7 for Windows for free. Update: Fusion 7 is coming to the Mac. Blackmagic CEO Grant Petty has revealed that the famously Mac-loving company is working on a Mac OS X version of Fusion.

Digital Painting 101 (1 of 5) intro Color Picker Near the bottom of the tool palette, you’ll see two squares of color – potentially black and white. These are called the foreground and background color. The color on your brush is known as the ‘foreground color’. Create a Photo Montage with After Effects Layers Magazine A Photo Speaks a Thousand Words Lots of programs and plug-ins create cool photo montages easily and quickly—handy for such things as photo DVDs and slideshows. But what if you don’t have those programs or plug-ins, or you want something a little more creative (yet still as easy to replicate and reuse) using a software program you already own? A few tricks and techniques in After Effects will have you up and running in no time at all. vj labor Elektra, Montreal 2013 (Yatra Arts) from Joel Dittrich on Vimeo. Live audio/visual performance at Elektra festival, Montreal, Canada, 03 may 2013. Curated by Yatra Arts. White Noise/Black Noise is an audio/visual project where I´m experimenting with intermodal aesthetics, creating audio and visuals side by side and performing live with a digital set up, relaying heavily on OSC, MIDI and audio analysis, to control audio and visuals simultaneously. 100% work by me.

42 Free Online Magazines for Designers Art and design magazines are designers close companion. Not only it feeds us with latest trends and news in the design industry, it’s also a good source of inspiration, particularly useful for those who hit the design block frequently. Just in case you weren’t aware, there’s a huge pool of free design magazines on the net; we meant those softcopy magazines you can either browse online or download (.PDF, .SWF) for offline viewing.