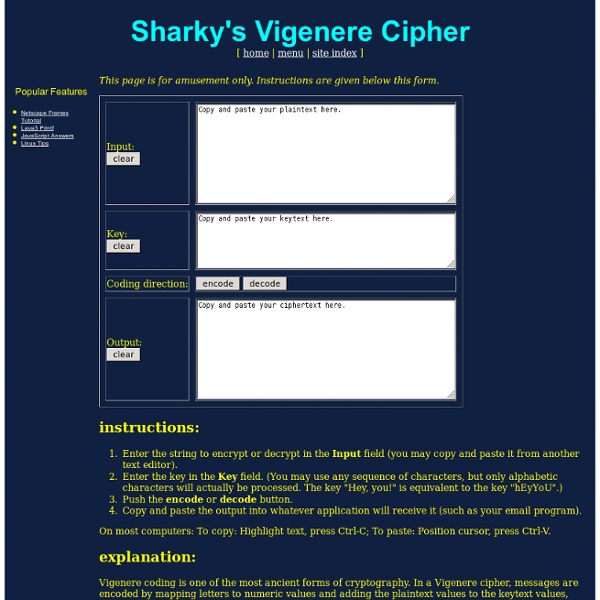 This page is for amusement only. Instructions are given below this form. instructions: Enter the string to encrypt or decrypt in the Input field (you may copy and paste it from another text editor). On most computers: To copy: Highlight text, press Ctrl-C; To paste: Position cursor, press Ctrl-V. explanation: Vigenere coding is one of the most ancient forms of cryptography. Choose a key that is as long as the plaintext message. Unfortunately, these steps take all the fun out of the Vigenere cipher. Vigenere ciphers with moderate keys are appropriate for situations that do not require failproof security. We hope you enjoy this simple JavaScript-based implementation. Related:  Ciphers & Puzzles

GC1M2NP A Lesson in Ciphers # 1 (Unknown Cache) in Missouri, United States created by TripCyclone This cache series is designed to give you an introduction to the world of ciphers. It will not cover every type of cipher out there, instead focusing on a small variety of different ciphers. Hopefully, you will walk away from solving this series with a new set of puzzle solving skills. And maybe, just maybe, you'll be able to go to that puzzle that's always bothered you and begin to see it with a new pair of eyes. I have designed this series such that you will not be able to solve them all in one swipe. Cryptography is defined as the practice and study of hiding information. For your first lesson, we'll use a cipher that I am certain ALL OF YOU have used already. abeguguveglrvtugqrterrfsvsglsbhecbvaggjbbarguerr jrfgavarglsbheqrterrfguveglguerrcbvagmrebsviravar You are looking for a small lock 'n lock container.

MP3Stego When looking at the steganographic tools available on the Net, it occurred to me that nothing had been done to hide information in MP3 files, that is sound tracks compressed using the MPEG Audio Layer III format. There is a growing interest world-wide in MP3 or indeed WMA files because they offer near-CD quality at compression ratio of 11 to 1 (128 kilobits per second). This gives a very good opportunity for information hiding. Although WMA has better quality in general, I did not have access to code and only an implementation for MP3 is provided as a proof of concept. MP3Stego will hide information in MP3 files during the compression process. The data is first compressed, encrypted and then hidden in the MP3 bit stream. The hiding process takes place at the heart of the Layer III encoding process namely in the inner_loop. We have discussed earlier the power of parity for information hiding.

Cryptography When I wrote my first book, Fermat’s Last Theorem, I made a passing reference to the mathematics of cryptography. Although I did not know it at the time, this was the start of a major interest in the history and science of codes and code breaking, which has resulted in a 400-page book on the subject, an adaptation of the book for teenagers, a 5-part TV series, numerous talks and lectures, the purchase of an Enigma cipher machine and the development of an interactive crypto CD-ROM. In the Crypto Corner, you will find details about my book on cryptography (The Code Book), information about my TV series based on the book (The Science of Secrecy) and you can explore the Black Chamber, which is an interactive encryption and codebreaking section. You will also find a section about the Cipher Challenge, there are some cryptograms (coded messages) for you to try and crack, a free downloadable CD-ROM version of The Code Book, and a quick Q&A based on the questions I am most often asked.

Keyed Caesar One variation to the standard Caesar cipher is when the alphabet is "keyed" by using a word. In the traditional variety, one could write the alphabet on two strips and just match up the strips after sliding the bottom strip to the left or right. To encode, you would find a letter in the top row and substitute it for the letter in the bottom row. For a keyed version, one would not use a standard alphabet, but would first write a word (omitting duplicated letters) and then write the remaining letters of the alphabet. For the example below, I used a key of "rumkin.com" and you will see that the period is removed because it is not a letter. You will also notice the second "m" is not included because there was an m already and you can't have duplicates. This encoder will let you specify the key word that is used at the beginning of the alphabet and will also let you shift the keyed alphabet around, just like a normal Caesar cipher. This is your encoded or decoded text:

Home - www.simplesite.com/the_runes “For me the magic moment came on page 2 where the green picture could mean any of three things. I identified the picture almost at once but could not see in which of the three directions it might go. And I knew that I had to find out!” “This should come with a warning label on it. ...It's highly additive. I've put it down with good intentions of getting back to life and work. “I took it to Rome with me and sought inspiration in the Forum.... ................. aaaagh, there's no escaping the clutches of the Runes!” “It took three pages before I was fully sold on this. “What I have enjoyed is the step-by-step developments of the first few pages leading into the greater challenges as you realise that there is more to each puzzle than you were first led to think - and the buzz of discovery when you realise how it actually works.” ”This is one of the most complex puzzles I have ever encountered. “I’m totally intrigued with this puzzle. You have a great adventure before you.

UK | England | Carvings riddle stumps villagers Puzzled residents across Yorkshire are turning detective after mysterious stone heads were left outside their properties in the dead of night. The sculptures feature the same carved symbol and come with a riddle attached. Despite CCTV film showing a man leaving three heads outside a post office, their origin remains unknown. So far, 12 have appeared in Goathland and Kilburn, North Yorkshire; four in Arthington, West Yorkshire and three in Braithwell in South Yorkshire. Each of the heads, which are up to a foot tall, looks different but all feature the same carving - which appears to spell out the word "paradox" - and a note bearing the riddle: "Twinkle twinkle like a star does love blaze less from afar?" The villages they have been found in are up to 50 miles from each other. Mike and Valerie Hoyes, who run a post office in Braithwell, found three heads outside their business on the morning of 23 August. Mrs Hoyes said: "It's very weird. Stonemasons quizzed

Pict-O-Caches | Trip's GeoAdventures If there was ever a cache that everyone should try once, pict-o-caches would likely be near the top of the list. They take aspects of several different types of caches and join them together to make a cache that everyone can participate in and enjoy. But how do they work? Pict-o-caches are a class on their own. Let’s look a bit closer. Obviously, this image shows a brick wall, so you would want to scan for brick buildings. Examining the photo, you at least now that it is near a window. Now, you can be certain that this is the corner of a building, and along the roof. This is the overall idea of this type of pict-o-cache. But I said that this the above method is just one type of this style of puzzle cache. I have not actually gone after one of this method. Either method provides an interesting caching experience. First, decide which method you want to us. However, for the first option, there’s a bit more that goes into preparing this. Once you find a location, grab the coordinates.

Cipher Codes generally substitute different length strings of characters in the output, whilst ciphers generally substitute the same number of characters as are input. There are exceptions and some cipher systems may use slightly more, or fewer, characters when output versus the number that were input. Codes operated by substituting according to a large codebook which linked a random string of characters or numbers to a word or phrase. For example, "UQJHSE" could be the code for "Proceed to the following coordinates". When using a cipher the original information is known as plaintext, and the encrypted form as ciphertext. Most modern ciphers can be categorized in several ways By whether they work on blocks of symbols usually of a fixed size (block ciphers), or on a continuous stream of symbols (stream ciphers).By whether the same key is used for both encryption and decryption (symmetric key algorithms), or if a different key is used for each (asymmetric key algorithms). Etymology[edit]