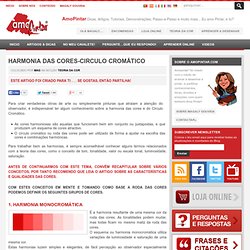 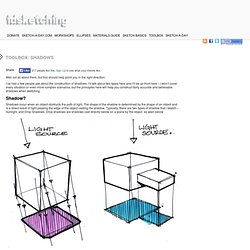 I’ve had a few people ask about the construction of shadows. I’ll talk about two types here and I’ll be up front here – I won’t cover every situation or even more complex scenarios, but the principles here will help you construct fairly accurate and believable shadows when sketching. Shadow? Shadows occur when an object obstructs the path of light. The shape of the shadow is determined by the shape of an object and is a direct result of light passing the edge of the object casting the shadow.

Since drop shadows are simple enough, I’ll cover another kind here – the Artificial Light Shadow. Before we continue, if you’re into the more technical of explanations, you can check out this website. Natural Light Shadow Technically speaking, there is no difference between an artificial light source and a sunlight source. See more after the break… Artificial Light Shadow Well, hope this covers some simple shadow tips. Famous Artists Course: Folds Part One.

One of the differences between 2D and 3D animation that people don't talk about much is how differently you have to approach costume in each medium. 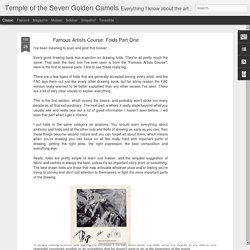 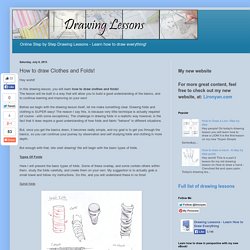 In this drawing lesson, you will learn how to draw clothes and folds! How to Draw Fabric Folds Tutorial by Barbara Bradley. Look for Several Types of Folds Five of the seven fold types--pipe, half-lock, diaper, drop and inert--appear in the abundant cloth of this Roman's toga. 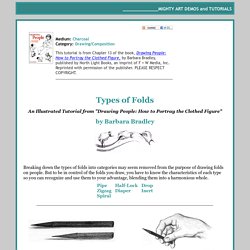 The more fabric there is, the more types of folds you'll see. TYPES OF FOLDS - An Illustrated Tutorial from "Drawing People: How to Portray the Clothed Figure" by Barbara Bradley 1927-2008 - Recognized as one of the best and most inspiring teachers of drawing in the country. She was an award winning illustrator, instructor, and painter. She was also the Director of the School of Illustration at the Academy of Art University in San Francisco for twenty-five years. She was one of a handful of successful women in a male-dominated profession, although she didn't consider herself a pioneer; she merely did what she loved to do.

A cross-contour drawing uses lines that seem to move along the surface of the objects in the composition. These lines emphasize the volume of the objects by wrapping around them. ‘Drawing Ideas’ Is a Primer for Thinking  It’s a book whose time has come. 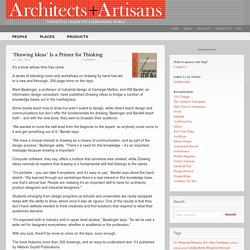 A series of standing-room only workshops on drawing by hand has led to a new and thorough, 304-page tome on the topic. Mark Baskinger, a professor of industrial design at Carnegie Mellon, and Will Bardel, an information design consultant, have published Drawing Ideas to bridge a number of knowledge bases out in the marketplace. Some books teach how to draw but aren’t suited to design, while others teach design and communications but don’t offer the fundamentals for drawing. Baskinger and Bardell teach both – and with the new book, they want to broaden their audience. “We wanted to hone the skill level from the beginner to the expert, so anybody could come to it and get something out of it,” Bardel says.

“We have a mutual interest in drawing as a means of communication, and as part of the design process,” Baskinger adds. “It’s portable – you can take it anywhere, and it’s easy to use,” Bardel says about the hand sketch.