Going down the rabbit hole and beyond 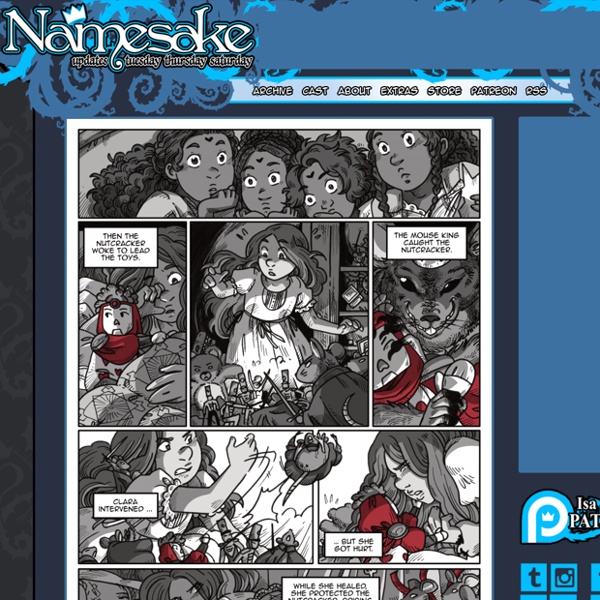 An incident last weekend regarding the “Knot” pre-orders, along with a partnership we’ll be announcing in a couple of weeks, finally spurred me into testing a new backend for the Namesake store I’ve had my eye on for awhile. We also finally secured the domain for Fairylogue Press as our own, as our catalog of books has expanded from a single issue of chapter 1 of Namesake to four books and a fifth on the way! This one really has a lot of improvements over the old store, including auto-delivery of any digital products and the ability to have size and price variation within a single item. We had to use four separate entries in the old store to list four different versions of Namesake (ebook, softcover, hardcover, slightly loved). If it was confusing for me, it had to be confusing for you! Also, adding prints was very much a pain in the patooey, which is why I wasn’t updating them as often as I should.

Comics at Daily Kos (Click to enlarge) There were so many mind-blowingly illogical quotes in Roberts' McCutcheon v. FEC opinion, it was hard to pick just one for the cartoon. Another classic: "[Many people] would be delighted to see fewer television commercials touting a candidate’s accomplishments or disparaging an opponent’s character,” he wrote.

KissWood Manga - Read KissWood Manga Online for Free Status: Completed Rank: 3641st, it has 21,978 monthly views. Rating: Average 4.82 / 5 out of 185 total votes. Love and Capes - The Story Abby and Mark are a typical couple. At least, that's what Abby thinks. Unknown to her, her boyfriend is not just an accountant, but also the super-powered crime-fighter, the Crusader. And, tonight, Mark's going to let her in on the secret. Abby always knew he was a good guy. Gaia It’s finally time to present the submissions placed between the positions 13 and 25 of the Sandra and Woo and Gaia artwork contest. There are some great works of art to be seen here, partially thanks to the extension of the submission period. I would like to thank all artists who have submitted a drawing or other piece of art. Don’t forget to check out the first batch of submissions which I posted on Monday.

00-00: Prologue - Call of the Wanderer Community Continue to BOOK 2 HEXACOSM E-Mail the Author Juathuur@Facebook Forum Support the Comic Vote @ TWCVote @ ComicHovelTWCL [ Copy this | Start New | Full Size ] a softer world: 123 joey The We Are Become Pals book is here! You can buy it right now, for $16 in hardcover! What it Takes, by KEZ. A SpiderForest comic. I'm with you, Colbs. Few things piss me off more than wearing a freaking pantsuit. What is even with that name? It's a suit. D'uh it has pants. You can vote to see the next page early!

SUBNORMALITY! All content copyright Winston Rowntree, 2015. Museum previously seen here and then here. octopus pie » Archive » #479 – octopus pie theater presents: eve fails at watching porn (again) Here’s a new comic for a new week. I’m very tired from back-to-back weekends of Comic Con and signing mountains of books, but it is a good tired. I think it might be a good idea to get on a reliable weekly schedule for the time being. More on that soon. New Yorkers: I’m doing a book release party for Listen At Home With Octopus Pie at the end of August! Adventures In Gay adventuresingay: See the full video here: MY COMING OUT STORY So just to clarify the above gif set (as per some questions and comments I received) In reference to the images above, the implication was not to suggest that one group of individuals is any better or worse than any other, nor even different. However, we are each born into this world with inherent properties out of our control, properties to which the world around us does behave and react differently towards in accordance with a larger social and economic construct. In the context of my coming out video, the phrase “being gay isn’t normal, it’s special” came in the run of a larger dialogue specifically in reference to my sexuality and it’s influence on my artistic career and endeavors.

Engaging The Enemy Truth or Dare—Page 9 Now, now, Tsunami… We just had a big leap forward in the number of new folks joining our Patreon campaign in the last couple days so we’re now at $7918/month over at the Patreon Page! That means we’re less than $90 away from unlocking the fully nude, Full Monty Tsunami painting by Marccus! Here’s the SFW headshot: