Who Were the Sea People. Answer: The situation regarding the identification of the Sea Peoples is more complicated than you might realize. 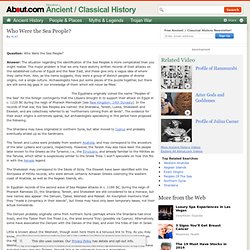 The major problem is that we only have sketchy written records of their attacks on the established cultures of Egypt and the Near East, and these give only a vague idea of where they came from. Also, as the name suggests, they were a group of distinct peoples of diverse origins, not a single culture. Archaeologists have put some pieces of the puzzle together, but there are still some big gaps in our knowledge of them which will never be filled. FC17: Bronze Age Greece: the Minoans & Mycenaeans (c.2500-1100 BCE) Introduction While the peoples of the ancient Near East gave us civilization, the Greeks gave it forms and meanings that make us look to them as the founders of our own culture, Western Civilization. 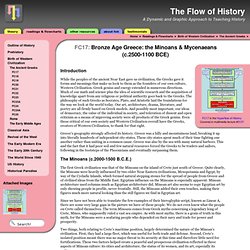 Greek genius and energy extended in numerous directions. Much of our math and science plus the idea of scientific research and the acquisition of knowledge apart from any religious or political authority goes back to the Greeks. The philosophy of such Greeks as Socrates, Plato, and Aristotle laid the foundations for the way we look at the world today. Our art, architecture, drama, literature, and poetry are all firmly based on Greek models. Greece's geography strongly affected its history. The Minoans (c.2000-1500 B.C.E.) Untitled. Lecture 8 – The Fall of Bronze Age Civilizations For print copy, click here A fragmentary mosaic of ancient source material describes in outline the collapse of urban civilizations throughout the eastern Mediterranean region, c. 1250 - 1090 BC. 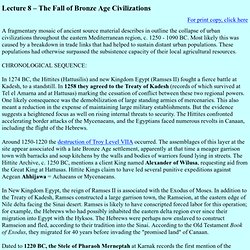 Most likely this was caused by a breakdown in trade links that had helped to sustain distant urban populations. These populations had otherwise surpassed the subsistence capacity of their local agricultural resources. In 1274 BC, the Hittites (Hattusilis) and new Kingdom (Ramses II) fought a fierce battle at Kadesh, to a standstill. Who Were the Sea People. By Robert Anderson The Sea People, who we are told of on reliefs at Medinet Habu and Karnak, as well as from the text of the Great Harris Papyrus (now in the British Museum), are said to be a loose confederation of people originating in the eastern Mediterranean. 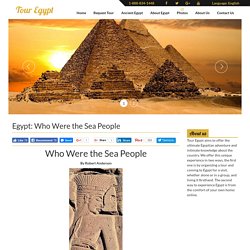 From their individual names, we believe that they may specifically have come from the Aegean and Asia Minor. However, regardless of their organization as a "loose confederation", they did manage to invade Egypt's northern coast and apparently mounted campaigns against the Egyptians on more than one occasion. The 12th century brought dramatic changes that permanently affected Asia Minor and the civilized world of that time.

Between 1200 and 1176 BC, the chaos that occurred in that region was probably a direct outcome of Sea People activity, and may be one reason why we find it difficult to find historical documentation beyond that date in Asia Minor. Medinet Habu Inscription. The Origin of the Sea Peoples. The Origin of the Sea Peoples This presentation is based on the ideas expressed in my thesis “The Early Minoan Colonization of Spain” and discusses the evidence that directly associates the catastrophic fall of the Aegean El Argar culture in southeastern Iberia in about 1350 B.C. with the complex phenomenon known as the Sea Peoples that over the next 175 years would rain apocalyptic devastation on the entire eastern Mediterranean. 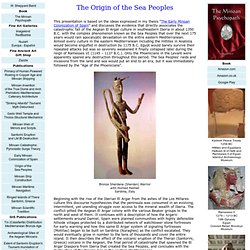 Almost every culture in the eastern Mediterranean including the Hittites in Anatolia would become engulfed in destruction by 1175 B.C. Egypt would barely survive their repeated attacks but was so severely weakened it finally collapsed later during the reign of Ramesses VI (1145 – 1137 B.C.). The Incursions of the Sea Peoples. I (Ramses III) extended all the boundaries of Egypt; I overthrew those who invaded them from their lands.

I slew the Denen in their isles, the Thekel and the Peleset were made ashes. The Sherden and the Weshesh of the sea, they were made as those that exist not, taken captive at one time, brought as captives to Egypt, like the sand on the shore. Papyrus Harris James Henry Breasted Ancient Records of Egypt, Part Four, § 403. Main Sea Battle Ramses III Against The Pereset and Sea Peoples. Sea People (ancient people. Sea Peoples and the Phoenicians. Sea Peoples and the Phoenicians: A Critical Turning Point in History Based on the paper presented by Sanford Holst at Al Akhawayn University in Ifrane, Morocco on June 28, 2005. 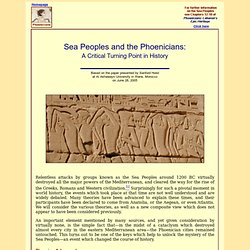