Indigemoji.com. I work with language every day, but I don't know the words my ancestors spoke. Centre For 21st Century Humanities. Australia: Temper and Bias. The deputy leader of the Liberal Party, Julie Bishop, said in 2017 that Aboriginal children should not be taught their own culture and language because it would retard them. Her fellow ministers and advisers weighed in with the opinion that Aboriginal culture was flawed because we hadn’t invented the wheel or done anything useful with the land. Some went so far as to say child abuse was one of our cultural traits. There is nothing postcolonial about Australia. Aboriginal-archaeological-discovery-in-kakadu-rewrites-the-history-of-australia-20170719-gxe3qy. Aboriginal map of Lake Eyre Basin, an area twice the size of France, released after 12 years in the making - ABC Rural - ABC News. An Aboriginal map detailing significant cultural information has been released for the Lake Eyre Basin, which spans 1.2 million square kilometres across inland Australia — almost one-sixth of the country. 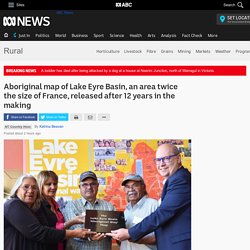 The map, which took 12 years to make, features songlines, historical trade routes and other cultural information about the basin, which covers 71 language groups. The plan for the map was first laid out at the 2006 Lake Eyre Basin Aboriginal Forum, and after many drafts and a lot of consultation with traditional owners, it has been launched in Alice Springs. Living treasure Northern Territory member of the Lake Eyre Basin Community Advisory Committee, Brenda Shields, described the map as a 'living' treasure. 9 lessons Australia has failed to learn from Aboriginal people. Another Reconciliation week has come and gone in Australia and once again many Australians had no idea. 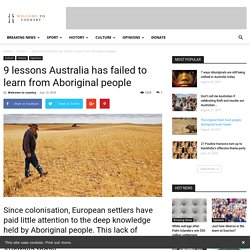 This isn’t helped by the fact that the government hasn’t taken any steps to create nation wide public holidays for either National Sorry Day or Mabo Day. In response to this, we’ve decided to try and force progress by putting together an introduction article that aims to serve as a “light bulb” moment for non Indigenous people who either haven’t given much thought about Aboriginal people, or have their very own hardened views towards our people. Our people have a wealth of knowledge but we are still being ignored. Below is a list of examples where Australia is failing to learn or understand.

Education Styles Australia’s international education rankings have been sliding for over 20 years. Map of Indigenous massacres grows to include more sites of violence across Australia. Updated 12 minutes agoFri 27 Jul 2018, 3:12am For hundreds of years, Aboriginal and Torres Strait Islander people have spoken about the murders of Indigenous tribes that occurred across the nation during frontier times. 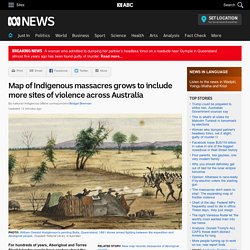 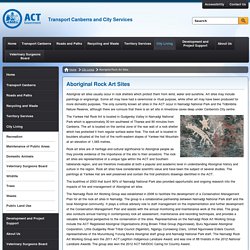 Art sites may include paintings or engravings. Some art may have had a ceremonial or ritual purpose, while other art may have been produced for more domestic purposes. The only currently known art sites in the ACT occur in Namadgi National Park and the Tidbinbilla Nature Reserve, although there are rumours that there is an art site in limestone caves deep under Canberra's City centre. The Yankee Hat Rock Art is located in Gudgenby Valley in Namadgi National Park which is approximately 30 km southwest of Tharwa and 90 minutes from Canberra. The art is located on the central zone of the rear wall of a rock shelter which has protected it from regular surface water flow. Rock art sites are of heritage and cultural significance to Aboriginal people as they provide evidence of the importance of the site to their ancestors. 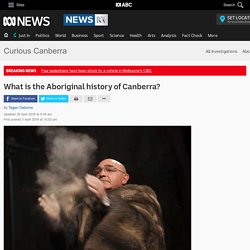 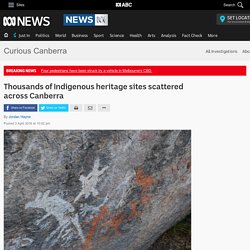 Indigenous history of Canberra break out box According to cultural land manager Tyronne Bell, anywhere that shows evidence of Aboriginal habitation is considered a site of significance by Aboriginal people. "There's a heap of sites around in the ACT, most of them are recorded with the ACT Heritage unit," he said. "It's areas where you walk around - you always find culture there. " The ACT Government estimates there are around 3,000 sites that show evidence of Aboriginal habitation. Discovery of ancient Aboriginal track a path to shared history and reconciliation - ABC South East NSW - Australian Broadcasting Corporation. In the 1970s John Blay met people from the Aboriginal community of Wallaga Lake, near Bermagui on the NSW Far south coast. 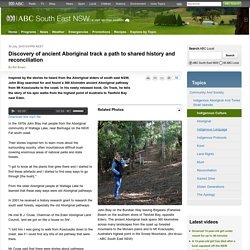 Their stories inspired him to learn more about the surrounding country, often mountainous difficult bush covering enormous areas of national parks and state forests. "I got to know all the plants that grew there and I started to find these artefacts and I started to find easy ways to go through [the bush]. " From the older Aboriginal people at Wallaga Lake he learned that these easy ways were old Aboriginal pathways. In 2001 he received a history research grant to research the south east forests, especially the old Aboriginal pathways. He met B.J. Living with the locals: Six extraordinary first contact stories of friendship and survival - RN. Opinion Updated Not all stories of first contact between European settlers and Indigenous Australians were fraught with violence and mistrust. 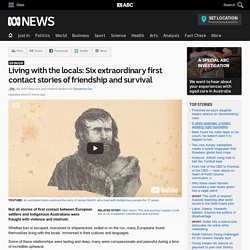 Whether lost or escaped, marooned or shipwrecked, exiled or on the run, many Europeans found themselves living with the locals, immersed in their cultures and languages. The Mapping of Massacres in Australia. What was left out of Seven Little Australians. This post is written by Matthew Curlewis, a descendant of Ethel Turner, who wrote Seven Little Australians. 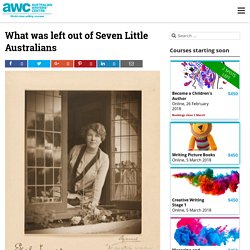 Matthew originally wrote this shortly before Australia Day 2016 and has given us permission to republish it. An attempt on behalf of my ancestor Ethel Turner, to correct some Koori history censored out of her children’s book classic: Seven Little Australians. A dreary, grey weekend in the south of the Netherlands. I’ve just been helping my Dutch parents-in-law move house, and am missing my own parents in Australia. Today, January 24th is my mother’s 84th birthday, and with the time zone constrictions I’ve only managed a short phone call to her. I flip through its familiar pages and settle instead on some publisher’s notes to this edition, at the back of the book. Aboriginal and Torres Strait Islander Playschool - Queanbeyan-Palerang. Where and When The playschool meets at 181 Cooma Street (entrance is via Margaret Donoghue Oval off Queenbar Road) each Thursday from 11.30am-2.00pm during school terms. 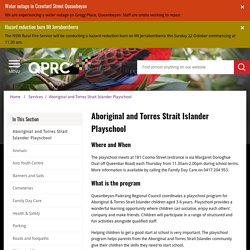 More information is available by calling the Family Day Care on 0417 204 953. What is the program Queanbeyan-Palerang Regional Council coordinates a playschool program for Aboriginal & Torres Strait Islander children aged 3-6 years. Playschool provides a wonderful learning opportunity where children can socialise, enjoy each others’ company and make friends. Decolonising Solidarity: Dilemmas and Directions for Supporters of Indigenous Struggles by Clare Land- a book review. It was with excitement that I received a copy of this book by Clare Land to read. I have read articles by Clare Land before and enjoyed her writing and insight a lot. I was, I will admit, sceptical about what authority a non-Indigenous person may hold to talk about such an important issue- I think it’s okay to mention this.

Clare writes in the book about how some of the people who participated in her research also held her with the same scepticism. The mantra ‘never trust a whitefella’ is repeated several times throughout the book and I came to trust that Clare acknowledged the complexities here. Also, the foreword is by Gary Foley, presenting as if to say ‘this is a trusted piece of work here’. Guilty of being Aboriginal. While the practice of giving police records to children who were removed was not secret, it appears to have been widely forgotten and left unaddressed. “I find it stunning that some people have been made to have this [criminal record] for their whole lives, on top of everything else that has befallen the stolen children,” says Ian Hamm, Chair of the Stolen Generation organisation Connecting Home. Hamm says he had heard rumours about these records, but not seen proof until now. “This is one of the many things that is still outstanding business for the Stolen Children,” he says.

A history of Aboriginal Astronomy. INDIGENOUS PEOPLE have passed down astronomical knowledge for generations. However little is known about this intimate understanding of the sky. Ancient Aboriginal calendars Astronomy was used by indigenous Australians to develop calendars and navigate the land. Each hunter-gatherer tribe lived according to an annual cycle, which informed what they ate and hunted and where they travelled. "The timing of the moves was critical, otherwise animals would eat the crop before the humans arrived and so most Aboriginal cultures had well-defined seasons," CSIRO astrophysicist Ray Norris told Australian Geographic. The number of seasons differs among Aboriginal groups according to where they were based. One way indigenous people defined seasonal changes was through a particular star’s heliacal rising. Heliacal rising refers to the annual rising of a star just before the Sun, making it visible just before sunrise.

Astronomy and the dreamtime Aboriginal astronomy art. New map records massacres of Aboriginal people in Frontier Wars. Updated. Map. Sydney Cove shipwreck an epic tale of adventure and survival in 1797 - RN. Updated. The Human Zoo: Documentary sheds light on stolen Aboriginal people 'treated as animals' Updated The Indigenous community on Palm Island in far north Queensland will feature in an historical documentary about a relatively unknown aspect of colonisation. What Aboriginal knowledge can teach us about happiness. Stronger Smarter Institute. Our Mission At the Stronger Smarter Institute, our mission is to directly improve the educational outcomes for Indigenous Australian schoolchildren.

Our Approach Every student deserves to feel safe, respected, valued and happy. Every student deserves to dream, believe and succeed. Unfortunately, this is not the case in Australia. Aboriginal languages to become new HSC subject. Walgett students perform a reconciliation dance. How can I feel Australian when this country has told me I don't belong? The racists are exposed, now let's end the stalking of Adam Goodes - The Drum. Opinion Updated When Adam Goodes was named a brand ambassador for David Jones, the racist abuse quickly followed. Horrorshow, Jimblah, Urthboy and Thelma Plum team up for anti-racism anthem. Updated. Why Halloween Season Can Be a Downer for Black Cosplayers. Me as Wonder Woman at Anime Detour. It’s almost Halloween! Every cosplayer’s favorite, or least favorite, season. 'Dreamtime' and 'The Dreaming': who dreamed up these terms?

** **We’re all, it seems, familiar with the terms “Dreamtime” and “The Dreaming” in relation to Aboriginal Australian culture, but – as I noted in the first part of this series – such terms are grossly inadequate: they carry significant baggage and erase the complexities of the original concepts. So how did this terminology enter the English language? At Poisoned Waterhole creek I tell my son about the slaughter of our people.