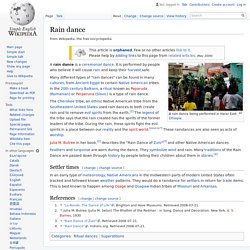 A rain dance is a ceremonial dance. It is performed by people who believe it will cause rain and keep their harvest safe. Many different types of "rain dances" can be found in many cultures, from Ancient Egypt to certain Native American tribes. In the 20th century Balkans, a ritual known as Paparuda (Romanian) or Perperuna (Slavic) is a type of rain dance. Native American Round Dance Music. Native American Dances - History and Information - Page 3. When a leader begins, he circles the sacred fire and is followed in single file by those who wish to participate. 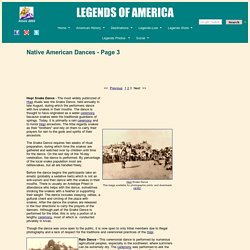 Leading the dancers counter-clockwise around the fire, participants sing, shake leg rattles, and dance in a stomping step. Men and women alternate positions behind the leader, organizing themselves by age and skill, with the youngest and least experienced dancers at the end of the line. Dancing typically starts well after dark and continues until dawn of the next day. Stomp Dance. A firekeeper and his assistant begin at dawn building a fire; one intended to last for the duration of the stomp dance. 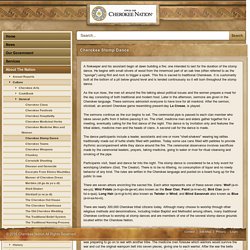 He begins with small slivers of wood from the innermost part of an oak tree (often referred to as the "sponge") using flint and rock to trigger a spark. This fire is sacred to traditional Cherokees. It is customarily built at the bottom of a pit below ground level and is tended continuously so it will burn throughout the stomp dance. Native American Dances - History and Information. Dances have always been significant in the lives of Native Americans as both a common amusement and a solemn duty. 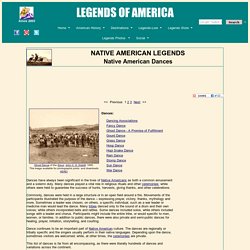 Many dances played a vital role in religious rituals and other ceremonies; while others were held to guarantee the success of hunts, harvests, giving thanks, and other celebrations. Commonly, dances were held in a large structure or in an open field around a fire. Movements of the participants illustrated the purpose of the dance -- expressing prayer, victory, thanks, mythology and more. Sometimes a leader was chosen, on others, a specific individual, such as a war leader or medicine man would lead the dance. Many tribes danced only to the sound of a drum and their own voices; while others incorporated bells and rattles. Dance continues to be an important part of Native American culture. This list of dances is far from all encompassing, as there were literally hundreds of dances and variations across the continent. Dancing Associations: Festivals. There were six main festivals or religious observances before the forced removal. 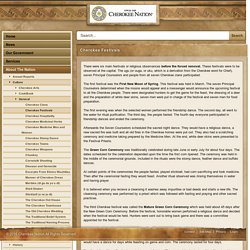 These festivals were to be observed at the capital. The ugu (or ouga, or uku, which is a derivation from the Cherokee word for Chief), seven Principal Counselors and people from all seven Cherokee clans participated. The first festival was the First New Moon of Spring. This festival was held in March. Student Resources in Context: Native American Music and Musical Instruments. Northern Cree Pow wow music Inter Tribal Native American Post Falls Julymush. The Rain Dance Helped Native Americans Get Through Dry Summers. In late August, when it is quite dry, especially in the Southwestern United States, Native American tribes used to do a rain dance. 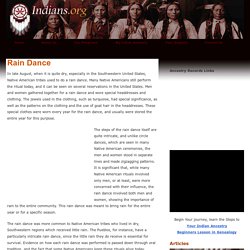 Many Native Americans still perform the ritual today, and it can be seen on several reservations in the United States. Men and women gathered together for a rain dance and wore special headdresses and clothing. The jewels used in the clothing, such as turquoise, had special significance, as well as the patterns on the clothing and the use of goat hair in the headdresses. These special clothes were worn every year for the rain dance, and usually were stored the entire year for this purpose. The steps of the rain dance itself are quite intricate, and unlike circle dances, which are seen in many Native American ceremonies, the men and women stood in separate lines and made zigzagging patterns.