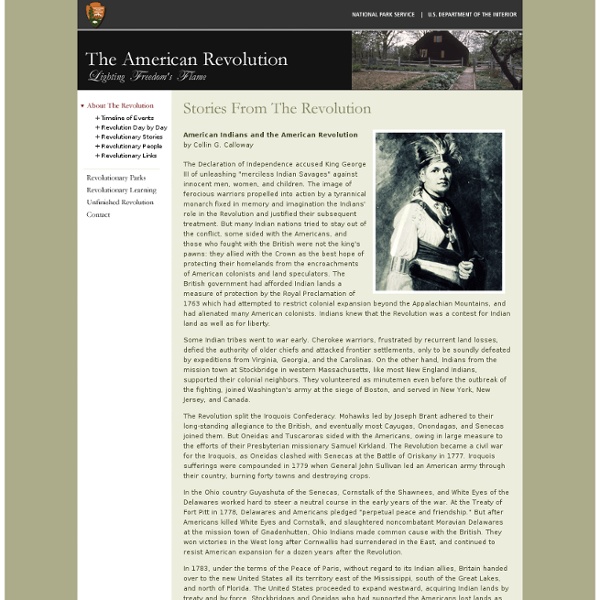 American Indians and the American Revolution by Collin G. Calloway The Declaration of Independence accused King George III of unleashing "merciless Indian Savages" against innocent men, women, and children. The image of ferocious warriors propelled into action by a tyrannical monarch fixed in memory and imagination the Indians' role in the Revolution and justified their subsequent treatment. But many Indian nations tried to stay out of the conflict, some sided with the Americans, and those who fought with the British were not the king's pawns: they allied with the Crown as the best hope of protecting their homelands from the encroachments of American colonists and land speculators. The British government had afforded Indian lands a measure of protection by the Royal Proclamation of 1763 which had attempted to restrict colonial expansion beyond the Appalachian Mountains, and had alienated many American colonists. Some Indian tribes went to war early. To learn more: Colin G.

Indian removal Early in the 19th century, while the rapidly-growing United States expanded into the lower South, white settlers faced what they considered an obstacle. This area was home to the Cherokee, Creek, Choctaw, Chicasaw and Seminole nations. These Indian nations, in the view of the settlers and many other white Americans, were standing in the way of progress. Eager for land to raise cotton, the settlers pressured the federal government to acquire Indian territory. Andrew Jackson, from Tennessee, was a forceful proponent of Indian removal. In 1814 he commanded the U.S. military forces that defeated a faction of the Creek nation. From 1814 to 1824, Jackson was instrumental in negotiating nine out of eleven treaties which divested the southern tribes of their eastern lands in exchange for lands in the west. In 1823 the Supreme Court handed down a decision which stated that Indians could occupy lands within the United States, but could not hold title to those lands. previous | next

Tecumseh - Ohio History Central - A product of the Ohio Historical Society Tecumseh, meaning Shooting Star, was born in 1768 near Chillicothe, Ohio to the Shawnee tribe; specifically he was the son of the reigning Chief, Pukeshinwau. Throughout his childhood Tecumseh experienced many malevolent, violent expansions by the United States which would later sustain his hatred towards the United States. Multiple times during his youth U.S militia would intersect whatever land the Shawnees were currently occupying. In many cases the Americans would set two tribes against one another through treaties with one party representing the land of the other. Tecumseh's first chances to prove himself as a warrior came during the primary attempts of tribal alliance during the Pan-Indian Movement (1783-1795). Tecumseh's brother, Lalawethica, renewed support for a tribal alliance based on the belief that all Native American territory was universal for every Native American community. See Also References Hurt, R.

The War for Independence Through Seneca Eyes: Mary Jemison Views the Revolution, 1775-79 The American Revolution divided Indian communities as well as Euro-American ones. Captured at the age of fifteen along the Pennsylvania frontier and adopted and integrated into a Seneca community, Mary Jemison watched the war through the eyes of a wife and mother. The Iroquois attempted to remain neutral in the conflict, and Jemison watched tribal leaders return from a meeting with Patriot colonists at German Flats, secure in their belief that Indian neutrality would be respected. Instead, the British sought to attract Iroquois support and four of the six Iroquois nations declared their allegiance to the crown. Soon, Seneca lands became a battleground and their fields were laid waste by the colonists’ scorched earth tactics. Jemison described the ensuing destruction and disease in 1823 when she related her life story to James Seaver, a local doctor near her home among the Iroquois of western New York. "Brother, you have merited death! "Brother! Source: James E.

Welcome to Shunya Friendly Fuedalism - The Tibet Myth I. For Lords and Lamas Along with the blood drenched landscape of religious conflict there is the experience of inner peace and solace that every religion promises, none more so than Buddhism. Standing in marked contrast to the intolerant savagery of other religions, Buddhism is neither fanatical nor dogmatic--so say its adherents. For many of them Buddhism is less a theology and more a meditative and investigative discipline intended to promote an inner harmony and enlightenment while directing us to a path of right living. Generally, the spiritual focus is not only on oneself but on the welfare of others. A glance at history, however, reveals that not all the many and widely varying forms of Buddhism have been free of doctrinal fanaticism, nor free of the violent and exploitative pursuits so characteristic of other religions. As with any religion, squabbles between or within Buddhist sects are often fueled by the material corruption and personal deficiencies of the leadership. II.

Blog Archives for 2010/08 Hitler emphasized to his commanders that the war in the east marked a different struggle. In March 1941 the Führer described the coming campaign to the generals in the following terms: “Clash of two ideologies: Crushing denunciation of Bolshevism . . . Communism is an enormous danger for our future . . . This is a war of extermination . . . As a result of this ideological framework, the Germans never paid the slightest attention to the deep-seated hostility to Stalin’s tyranny that much of the Russian population felt. Two weeks after the signing of the armistice with France on 17 June 1940, Brauchitsch ordered Halder to begin thinking about an invasion of the Soviet Union. As planning began, the general staff’s geographic department suggested that occupation of Leningrad, Moscow, the Ukraine, and the Caucasus would not exhaust Soviet economic potential. On 5 August 1940, Major General Erich Marcks presented his draft conception to Halder.