Mobile Web Apps vs Native Apps – Which One is Right for SMBs? Organizations and developers worldwide face the difficult choice of whether to build native applications or mobile web apps for their business. 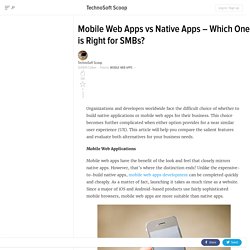 This choice becomes further complicated when either option provides for a near similar user experience (UX). This article will help you compare the salient features and evaluate both alternatives for your business needs. Mobile Web Applications Mobile web apps have the benefit of the look and feel that closely mirrors native apps. However, that’s where the distinction ends! Advantages of Mobile Web Apps The development cycle is very similar to that of a customized website.Native look & feel at a much lower expense.Offer functionality & performance of a native application.These apps, once launched, are easier to edit with changes effected immediately. Apart from the many advantages, there are some limitations of mobile web applications as well: In an ever-evolving tech industry, businesses and users need to keep up with the changes.

Can We Please Stop Fighting The Native vs. Web App Wars? James Long, a developer at Mozilla (and proponent of the web), insists that the mobile Web will never compete with native app development. 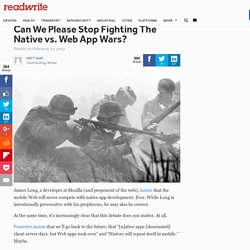 Ever. While Long is intentionally provocative with his prophecies, he may also be correct. At the same time, it’s increasingly clear that this debate does not matter. At all. Forrester insists that we’ll go back to the future; that “[n]ative apps [dominated] client server days, but Web apps took over” and “History will repeat itself in mobile.” But if Facebook’s ReactJS is any indication, the future of “native” and “web” is really all about “hybrid.” The Web Is “Too Slow” The problem with web apps, as Long describes it, is that the DOM (the document object model, the API that describes how to programmatically access a document or web page/app) is “too slow,” and will never get faster. Based on nothing. Which is basically what React Native does, skipping the DOM altogether. Flipboard, for example, goes this route, as explained in a recent blog post. Native Apps vs. Web Apps – What Is the Better Choice? 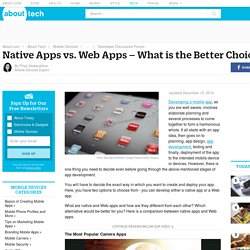 Developing a mobile app, as you are well aware, involves elaborate planning and several processes to come together to form a harmonious whole. It all starts with an app idea, then goes on to planning, app design, app development, testing and finally, deployment of the app to the intended mobile device or devices. However, there is one thing you need to decide even before going through the above-mentioned stages of app development. You will have to decide the exact way in which you want to create and deploy your app. Here, you have two options to choose from - you can develop either a native app or a Web app. What are native and Web apps and how are they different from each other? Continue reading below our video Play Video. Native apps crushed mobile Web apps. Remember the debate a few years back about whether apps should be native to each platform or made universally available through a single Web app? 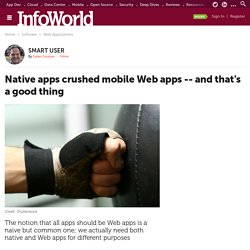 Well, the native app has won that debate. (Sorry, Jon Udell!) Thank goodness! But Web apps still have a place, albeit not as the main solution you should use. The silly arguments in favor of Web apps The pro-Web app argument is that a single app ensures both consistency and universal access, with less development effort. Oh, and Web apps are often not very capable, and they don't work at all when you don't have a reliable Internet connection. That's not to say native apps are always better than Web apps. And many mobile banking apps -- even on tablets -- present fewer capabilities than their Web apps (still on those same tablets).

These bad native apps reflect failures in design and execution by developers and UI designers, not in the fundamental concept of a native app. Modern Apps - Mobile Web Sites vs. Native Apps vs. Hybrid Apps. One question routinely surfaces in today’s modern development landscape—whether to build a mobile Web site versus a native app versus a hybrid app. 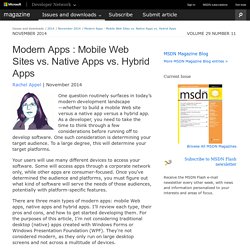 As a developer, you need to take the time to think through a few considerations before running off to develop software. One such consideration is determining your target audience. To a large degree, this will determine your target platforms. Your users will use many different devices to access your software. Mobile Web vs. Native Apps or Why You Want Both. While the mobile opportunity has been clear for some time, how to best tackle it remains a subject of debate. 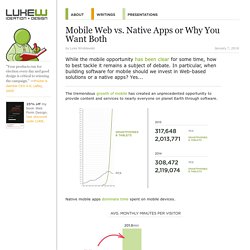 In particular, when building software for mobile should we invest in Web-based solutions or a native apps? Yes... The tremendous growth of mobile has created an unprecedented opportunity to provide content and services to nearly everyone on planet Earth through software. React May Have Just Ended The Native Vs. Web Debate. As much as we may cling to the Web on our PCs, apps are everything in mobile. 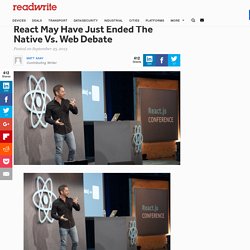 Now consuming 90% of our mobile time, apps are everything on mobile devices. Native apps, that is. Ever since Mark Zuckerberg declared Facebook’s early investments in HTML5 instead of native app development his biggest mistake, the mobile Web has been in steady retreat. Until now. Thanks, ironically enough, to Zuckerberg’s army of engineers at Facebook.