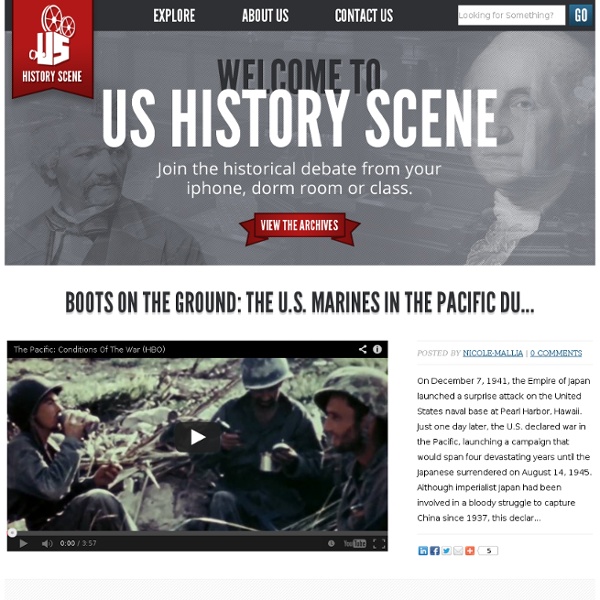 Origins of the Cold War 1945-49 FOUR causes of the Cold War [BARE]. NINE events which caused the Cold War. FOUR decisions made at the Yalta Conference. U.S. History: Free streaming history videos and activities A Secret Landscape: The Cold War Infrastructure of the Nation's Capital Region 54 Teaching and Lesson Plan Ideas for History Teachers #sschat Since I've recently given a set of my curated plans for math teachers, English teachers and general common core standards (see end of this post), I thought I'd share some lessons for history teachers. If you're a history teacher and not following #sschat on Twitter, you should. This is a set of 12 lessons about what it was like for children to live in the second world war. I love this set of lessons because it builds empathy and helps teach the story of world war 2 from a child's perspective. September 11 is coming up. While it is still very hard for many of us to even talk about this day, we have a whole 11+ years of our students who have no memory of this event. The first handout on this page is a good overview of the timeline of 9/11. June 28 is the anniversary of the outbreak of World War 1. If you want to teach about the Olympics, the TES forum out of the UK is where the great content is being uploaded daily. Topical studies are great. I have to bookmark this site just for me. Dr.

Teaching Adolescents How to Evaluate the Quality of Online Information An essential part of online research is the ability to critically evaluate information. This includes the ability to assess its level of accuracy, reliability, and bias. In 2012, my colleagues and I assessed 770 seventh graders in two states to study these areas, and the results definitely got our attention. Unfortunately, over 70 percent of the students’ responses suggested that: Middle school students are more concerned with content relevance than with credibility They rarely attend to source features such as author, venue, or publication type to evaluate reliability and author perspective When they do refer to source features in their explanations, their judgments are often vague, superficial, and lacking in reasoned justification Other studies highlight similar shortcomings of high school and college students in these areas (see, for example, a 2016 study from Stanford). So what can you do to more explicitly teach adolescents how to evaluate the quality of online information?

Westward Expansion | Facts Summary Timeline Westward Expansion summary: The story of the United States has always been one of westward expansion, beginning along the East Coast and continuing, often by leaps and bounds, until it reached the Pacific—what Theodore Roosevelt described as "the great leap Westward." The acquisition of Hawaii and Alaska, though not usually included in discussions of Americans expanding their nation westward, continued the practices established under the principle of Manifest Destiny. Even before the American colonies won their independence from Britain in the Revolutionary War, settlers were migrating westward into what are now the states of Kentucky and Tennessee, as well as parts of the Ohio Valley and the Deep South. Westward the Course of Empire The debate over whether the U.S. would continue slavery and expand the area in which it existed or abolish it altogether became increasingly contentious throughout the first half of the 19th century. Timeline of Westward Expansion Manifest Destiny O.K.

American History Best Sites for Primary Documents in US History Common Core offers an incentive for teachers to use historic documents to build literacy skills in a content area while empowering students to be the historian in the classroom. But document-based (DBQ) instruction in this context requires four key elements to be successful: The right documents. I've assigned my pre-service social studies methods class the task of designing some DBQs and I assembled a list of some of my favorite sources for finding historic documents in American History. A Democracy of Images: Photographs from the Smithsonian American Art Museum. Woman and Child ca. 1850, daguerreotype with applied color Jeremiah Gurney Digital Public Library of America (DPLA) The Digital Public Library of America (DPLA) brings together the riches of America’s libraries, archives, and museums, and makes them freely available to the world. Fighting American Creator U.S. Have Fun with History A resource for students, educators and all lovers of American History.