Untitled. 'Natives,' Jeremy Hersh Short Film, Explores Queer Cultural Appropriation. What it means to embody a queer identity is different for every individual, as that identity always involves a compilation of many different, intersecting parts and personal experiences from one's life. 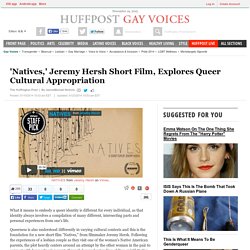 Queerness is also understood differently in varying cultural contexts and this is the foundation for a new short film "Natives," from filmmaker Jeremy Hersh. Following the experiences of a lesbian couple as they visit one of the woman's Native American parents, the plot heavily centers around an attempt by the other woman in the pair to connect with her partner's parents through her understanding of "two spirit" Native American identity and feminist theory. 4 Thoughts for Your Yoga Teacher Who Thinks Appropriation Is Fun. Letter To My Yoga Teacher I walked into your class today. 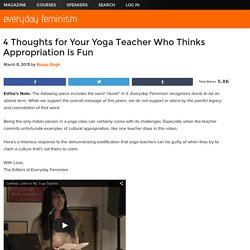 As usual, I was the only Indian person. Which of course made me strive for super human, wonder woman, extra flexibility, so as to really represent for my people. 4 Ways To Honor Native Americans Without Appropriating Our Culture. I recently had a friend – a nice white lady I’ve known for years – ask me whether buying moccasins for her infant son would be considered cultural appropriation, and therefore offensive. 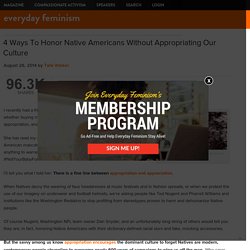 She has read my many rants on things like hipster headdresses and Native American mascots, and she wanted to make sure that she wasn’t doing anything to warrant my Lakota wrath or a hashtag like #NotYourBabyFootware or whatever. I’ll tell you what I told her: There is a fine line between appropriation and appreciation. When Natives decry the wearing of faux headdresses at music festivals and in fashion spreads, or when we protest the use of our imagery on underwear and football helmets, we’re asking people like Ted Nugent and Pharrell Williams and institutions like the Washington Redskins to stop profiting from stereotypes proven to harm and dehumanize Native people.

With that, I give you four ways to honor Native Americans without dehumanizing them. If You Really Love You Some Indians, Stop Exploiting Our Heritage! Everybody in Cleveland loves the Indians. 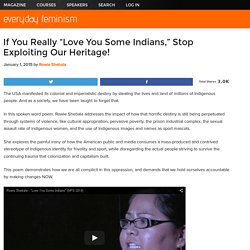 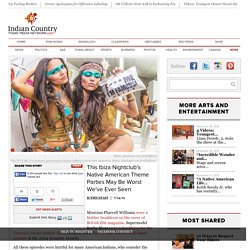 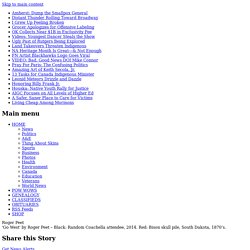 A woman wears a sacred headdress (or approximation thereof) at Coachella and thinks nothing of it -- thinks it's a fun accessory. Yet to Native Americans, the casual taking of something important is a sign that the iniquities of history are still with us. The history of Europeans on Turtle Island is, from the American Indian perspective, one long racist land grab. Over and over, land and livelihood -- and of many, many lives -- have been taken from American Indians by, for lack of a better term, white people.

Taking Natives' culture may not seem a big deal to the hipsters and fashion designers who do it regularly, but to many Natives it's a continuation of the terrible story that started in 1492. The Strange Case of 'White Girls Rock Headdresses,' the Most Hated Page on Instagram. Last week, ICTMN received numerous tips about an Instagram page called "White Girls Rock Headdresses," a page that featured pictures of caucasian women wearing headdresses modeled on the sacred feather headdress, sometimes called a "warbonnet," of the Plains Indians. 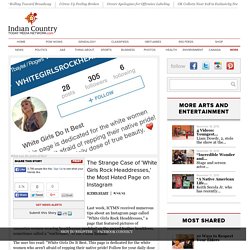 The user bio read: "White Girls Do It Best. This page is dedicated for the white women who aren't afraid of repping their native pride! Follow for your daily dose of true beauty. Company Says Indian Mascots Are Reason They Can Sell Headdresses. Novum Crafts has more than 12,000 followers and 275 posts. 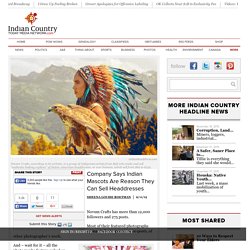 Most of their featured photographs appear to be re-grams, or re-posts, of other photographer’s work. indianheaddress.com And – wait for it – all the photographs feature naked or scantily clad white women wearing headdresses. Novum Crafts, according to its website, is a group of indigenous artists from Bali who make and sell “authentic looking replicas” of Native American headdresses, or war bonnets, which sell from $69 to $139.

There a couple pages on the website that address cultural appropriation and the meaning of a headdress. The Kansas City Chiefs, Atlanta Braves, Chicago Blackhawks and the Washington NFL team are all also specifically identified and used as justification for appropriation. Manning: Watertown High School Homecoming Coronation Must Change. On Thursday, September 10, Watertown High School, of Watertown, South Dakota, posted a photograph on their Facebook page, recognizing the homecoming royalty candidates. 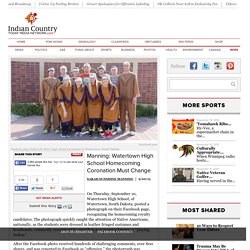 The photograph quickly caught the attention of Native Americans, nationally, as the students were dressed in leather fringed costumes and headbands, commonly recognized by outsiders as a practice known as “playing Indian.” After the Facebook photo received hundreds of challenging comments, over 800 shares, and was reported to Facebook as “offensive,” the photograph was removed from the website by Saturday morning.

Still, the school continued to receive national pressure after a fast growing change.org petition was started by South Dakota native, Becky Plumage (Assiniboine), of Pierre, South Dakota. This attention continued throughout the Watertown High School homecoming week festivities. RELATED: Two High Schools Drop Native American Imagery, But Keep Mascots This needs to be heard. In Search of an Authentic Indian: Notes on the Self. I started writing this in the aftermath of the Rachel Dolezal affair and have continued to write as the Andrea Smith story has taken off. 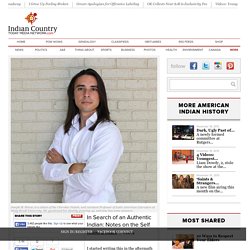 But it’s not about them. The various ways in which race and passing, cultural appropriation and calculation have been discussed has inspired this text. Pocahottie Chainsaw Massacre. Rez Natives love us some Halloween. I Was Tossed From a Bar for Protesting Fake Headdresses. Halloween is the season most synonymous with cultural appropriation. Annually, Native people and allies of Native folks find themselves in uncomfortable situations where they are forced to address racially and culturally insensitive Halloween costumes either on social media or in person. Facilitating a conversation about the inappropriateness of a Halloween costume is notoriously difficult. In a perfect world, members of marginalized populations would not be responsible for opening the dialogue about cultural appropriation.

Moreover, individuals wearing racist costumes would be open to understanding why their costumes are offensive. The process of drawing attention to cultural appropriation would be done in a calm, and professional manner. Your Anti-Oppression Roadmap to Traveling Through and Visiting Indian Country. Editor’s Note: We use the term, Indian Country, since it has been reclaimed by many indigenous people and communities. However we also recognize that as with all reclaimed words, there are Native people who do not agree with it being used and find it harmful. Therefore, we defer to what is the preference of the writer who is speaking from her own experiences as an indigenous person. I cringe a little when someone tells me they’re planning to visit Indian Country. Khloe Kardashian Under Fire After Posting Native American Headdress Photo.

Lady Gaga rocked some 80's style while leaving her apartment building in New York City on June 6. Eva Longoria and Felicity Huffman had a little "Desperate Housewives" reunion at the AFI Life Achievement Award: A Tribute To Jane Fonda at the Dolby Theatre in Hollywood, California on June 5. Lindsay Lohan was seen at Chiltern Firehouse in London on June 5. Scott Disick attended the 2014 FIFA World Cup McDonald's launch party at Pillars 38 on June 5 in New York City.

Lena Dunham was seen rocking a "No Comment" sweater while out and about in New York City on June 5. Oh My Gods: The Triumphs of a Little Brown Kid  As a young brown girl growing up in suburban San Diego, I was an anomaly at times, being one of few Hindus in a town that was proudly Judeo-Christian. Why Pocahottie Should Be Pocanottie This Halloween  Why It Isn't Possible For Black Americans To Appropriate African Culture. What Movies Best Depict Indians? Connecticut activists working on the mascot issue need some suggestions about movies or other cultural events we could use to educate about Indian nations.

There’s been some small progress in Connecticut in getting rid of Indian mascots, but not enough. A couple of years ago Quinnipiac College changed its mascot from the “Braves” to the “Bobcats”. This year West Hartford public schools decided to abandon Indian mascot pictures. An Open Letter to Non-Natives in Headdresses.