The crayola-fication of the world: How we gave colors names, and it messed with our brains (part I) 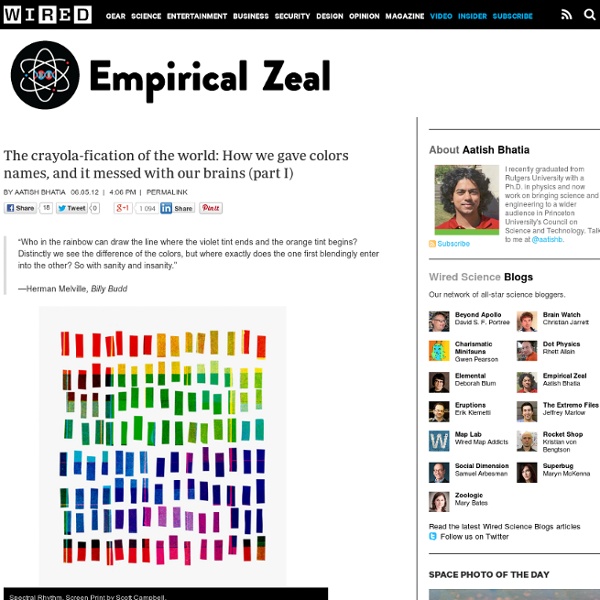 “Who in the rainbow can draw the line where the violet tint ends and the orange tint begins? Distinctly we see the difference of the colors, but where exactly does the one first blendingly enter into the other? So with sanity and insanity.”—Herman Melville, Billy Budd Spectral Rhythm. Screen Print by Scott Campbell. In Japan, people often refer to traffic lights as being blue in color. Blue and green are similar in hue. One of the first fences in this color continuum came from an unlikely place – crayons. Reconstructing the rainbow. In modern Japanese, midori is the word for green, as distinct from blue. And it’s not just Japanese. (Update: Some clarifications here. I find this fascinating, because it highlights a powerful idea about how we might see the world. Imagine that you had a rainbow-colored piece of paper that smoothly blends from one color to the other. A map of color for an English speaker. But if you think about it, there’s a real puzzle here. And here’s what they found.

The Brink of Oblivion: Inside Nazi-Occupied Poland, 1939-1940 In the late 1930s and early 1940s, a German photographer and ardent Nazi named Hugo Jaeger enjoyed unprecedented access to the Third Reich’s upper echelon, traveling with Adolf Hitler to massive rallies and photographing him at intimate parties and in quieter, private moments. The photos made such an impression on the Führer that Hitler famously declared, upon first seeing Jaeger’s work: “The future belongs to color photography.” But beyond merely chronicling Hitler’s ceaseless travels, Jaeger also documented the brute machinery of the Reich, including the Nazi invasion of Poland in 1939.

A Poem: A Guide To Words Slut. Makes me think of glitter. I think slut is a really pretty word. Probably because I’ve heard it being used to describe a lot of really pretty people. Makes me think of city light constellations and perfectly glossed lips with white white smiles, atop a careless laugh. Joel Meyerowitz Black and White in Color From his street photography in New York to his soft seascapes on Cape Cod, Joel Meyerowitz’s pioneering work has been crucial to the acceptance of color photography among curators and collectors. The notion that color was somehow less worthy than black-and-white may seem quaint now, but it was a serious question in the 1960s. He has answered that question — and posed new ones over an impressive half-century career that is the subject of “Joel Meyerowitz: Taking My Time,” a two-volume monograph published this month by Phaidon. He addresses the debate in the first volume, with an insert tucked inside titled “A Question of Color.”

Beginner's Guide to the Inca Empire Overview of the Inca Empire The Inca Empire was the largest pre-hispanic society of South America when it was 'discovered' by the Spanish conquistadors led by Francisco Pizarro in the 16th century AD. At its height, the Inca empire controlled all of the western part of the South American continent between Ecuador and Chile. The Inca capital was at Cusco, Peru, and the Inca legends claimed they were descended from the great Tiwanaku civilization at Lake Titicaca. Origins of the Inca Empire Archaeologist Gordon McEwan has built an extensive study of archaeological, ethnographic, and historical sources of information on the Inca origins.

The Ultimate Guide to Writing Better Than You Normally Do. Writing is a muscle. Smaller than a hamstring and slightly bigger than a bicep, and it needs to be exercised to get stronger. Think of your words as reps, your paragraphs as sets, your pages as daily workouts. Think of your laptop as a machine like the one at the gym where you open and close your inner thighs in front of everyone, exposing both your insecurities and your genitals. Goethe on the Psychology of Color and Emotion Color is an essential part of how we experience the world, both biologically and culturally. One of the earliest formal explorations of color theory came from an unlikely source — the German poet, artist, and politician Johann Wolfgang von Goethe, who in 1810 published Theory of Colors (public library; public domain), his treatise on the nature, function, and psychology of colors. Though the work was dismissed by a large portion of the scientific community, it remained of intense interest to a cohort of prominent philosophers and physicists, including Arthur Schopenhauer, Kurt Gödel, and Ludwig Wittgenstein. One of Goethe’s most radical points was a refutation of Newton’s ideas about the color spectrum, suggesting instead that darkness is an active ingredient rather than the mere passive absence of light. YELLOWThis is the color nearest the light. It appears on the slightest mitigation of light, whether by semi-transparent mediums or faint reflection from white surfaces.

Inca Architecture at Machu Picchu Inca architecture was among the finest prehistoric architecture in the world. Examples can be seen in Cuzco and Ollantaytambo, and of course here at Machu Picchu. The building style is characterized by exquisitely cut masonry, placed together completely without mortar. The raw material was granite, worked by stone and sand into irregular shapes that fit together like a gigantic puzzle. Some stones have as many as thirty facets worked into the surface, and as a result, the faces of the stone fit together so tightly that a needle won't fit between them. Flower names in English, French and Latin. Flower name with flower meaning - the Language of Flowers now available in paperback Volume I click here for more information Flower Names Flower Meaning Flower Fairy Tales The Flowers Personified introduction The Flowers The hand-colored plates

Before and After D-Day: Rare Color Photos From England and France, 1944 It’s no mystery why images of unremitting violence spring to mind when one hears the deceptively simple term, “D-Day.” We’ve all seen — in photos, movies, old news reels, and usually in grim black-and-white — what happened on the beaches of Normandy (codenamed Omaha, Utah, Juno, Gold and Sword) as the Allies unleashed their historic assault against German defenses on June 6, 1944. But in color photos taken before and after the invasion, LIFE magazine’s Frank Scherschel captured countless other, lesser-known scenes from the run-up to the onslaught and the heady weeks after: American troops training in small English towns; the French countryside, implausibly lush after the spectral landscape of the beachheads; the reception GIs enjoyed en route to the capital; the jubilant liberation of Paris itself. As presented here, in masterfully restored color, Scherschel’s pictures — most of which were never published in LIFE — feel at-once profoundly familiar and somehow utterly, vividly new.