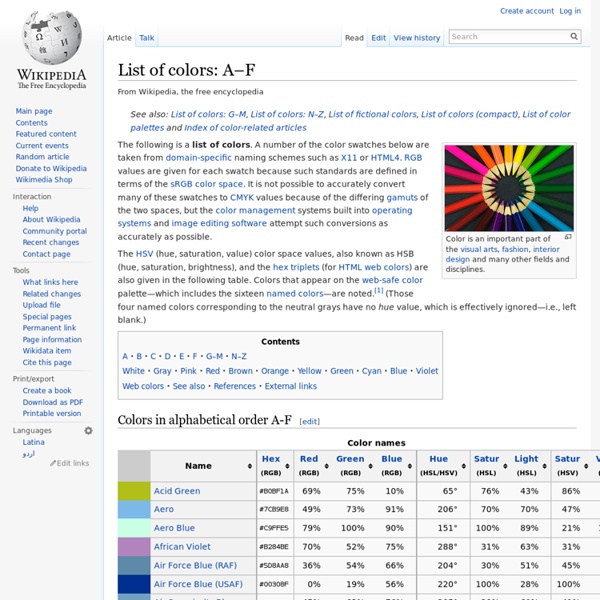 The following is a list of colors. A number of the color swatches below are taken from domain-specific naming schemes such as X11 or HTML4. RGB values are given for each swatch because such standards are defined in terms of the sRGB color space. It is not possible to accurately convert many of these swatches to CMYK values because of the differing gamuts of the two spaces, but the color management systems built into operating systems and image editing software attempt such conversions as accurately as possible. The HSV (hue, saturation, value) color space values, also known as HSB (hue, saturation, brightness), and the hex triplets (for HTML web colors) are also given in the following table. Colors that appear on the web-safe color palette—which includes the sixteen named colors—are noted.[1] (Those four named colors corresponding to the neutral grays have no hue value, which is effectively ignored—i.e., left blank.) Colors in alphabetical order A-F[edit] Colors by shade[edit] White[edit]

The 5 best colour search tools for designers Have you ever felt the lack of a sophisticated and intuitive way to search for colour inspiration? If so, you'll find a remedy here. Whether you're looking for free or stock photos in a specific colour palette, or a CSS code shortcut for the perfect gradient, these five tools are the ultimate resources for searching, manipulating, and creating colour palettes on the web. You'll find all our colour-related articles here 01. Colrd

Crane Brinton Clarence Crane Brinton (Winsted, Connecticut, 1898 - Cambridge, Massachusetts, September 7, 1968) was an American historian of France, as well as an historian of ideas. His most famous work, The Anatomy of Revolution (1938) likened the dynamics of revolutionary movements to the progress of fever.[1] Born in Winsted, Connecticut, his family soon moved to Springfield, Massachusetts, where he grew up and attended the public schools there before entering Harvard University in 1915. His excellent academic performance enabled him to win a Rhodes Scholarship to attend Oxford University, receiving a Doctor of Philosophy (D.Phil.) degree 1923. Brinton then began teaching at Harvard University that same year, becoming full professor in 1942 and remaining at Harvard until his death.[2] For many years he taught a popular course at Harvard known informally to his students as "Breakfast with Brinton."

Bruno Catalano - In Search of Missing Pieces ‘In Search of Missing Pieces’ is a series of original sculptures by French artist Bruno Catalono. Caught my eye big time! Via My Modern Met Color Numbers - Hexadecimal Colour Value Calculator for HTML Use this simple java applet to compare html colours quickly and easily. Excellent for designing web pages, as you can set the foreground and background colors to your tastes, and then read their hexadecimal "color code" values, which are used in HTML. You can contrast different sizes of text and/or a big colored area against the background colour. Note that the colours shown are java's interpretation of the colour value. HTML sometimes shows them a teeny tiny bit differently.

Drawing Uncensored One of the best exercises I’ve come across for loosening up and brainstorming for drawings I learned at school in Seattle: the China Wall exercise. Ideally, you shut yourself in a room with only a stack of 100 sheets of newsprint, ink, a stick or brush (or your face, or toes; whatever…), and a pot of coffee (or drug of choice), and not leave the room until there is something on every single one of those pieces of paper. Your drawings can be representational, they can take two seconds to make, you can spend an hour on one if you like; the point is to basically puke your brains out onto the paper and free up all of the things that stop us from the pleasure of just drawing. Shunryu Suzuki says something very profound on this release and non-attachment in his book, Not Always So: Practicing the True Spirit of Zen: “Each one of us knows how to go to the rest room without attaching to something we have in our bodies. So, basically, this is your brain taking a crap.

List of Crayola crayon colors An assortment of crayon boxes produced by Binney & Smith between 1903 and 1920 Since the introduction of Crayola drawing crayons by Binney & Smith in 1903, more than two hundred distinctive colors have been produced in a wide variety of assortments. The table below represents all of the colors found in regular Crayola assortments from 1903 to the present. Michael Bowen (artist) An icon of the American Beat Generation and the 1960s counterculture, Bowen is also known for his role in inspiring and organizing the first Human Be-In in San Francisco.[4] Chronicled in books and periodicals reflecting on the turbulent 60s, Bowen's historical impact on both the literary and visual art worlds is well documented.[5] He remains influential among avant-garde art circles around the world.[6] Michael Bowen was born December 8, 1937, in Beverly Hills to Grace and Sterling Bowen, a Hollywood dentist.[7] His mother's lover, Benjamin (Bugsy) Siegel, affectionately known as Uncle Benjie to Michael, would often take the youthful Bowen to not only the Flamingo Hotel on the Las Vegas Strip in Paradise, Nevada that he created, but also to the Sir Francis Drake Hotel near Union Square in downtown San Francisco. Red Future? 1959 In 1963, police brutality and persecution drove many of the Beat Generation writers, musicians, and artists out of San Francisco.

Anamorphic Drawings: Hidden Images Revealed Fresh Visual Daily Anamorphic Drawings: Hidden Images Revealed Thursday 03.10.2011 , Posted by Paul Caridad Share: Web colors Web colors are colors used in displaying web pages, and the methods for describing and specifying those colors. Colors may be specified as an RGB triplet or in hexadecimal format (a hex triplet). They may also be specified according to their common English names in some cases. Often a color tool or other graphics software is used to generate color values. In some uses, hexadecimal color codes are specified with notation using a leading number sign (#).[1][2] A color is specified according to the intensity of its red, green and blue components, each represented by eight bits.

Draw Ears For a video version of this tutorial visit www.proko.com/how-to-draw-ears-anatomy-and-structure In this tutorial I will go over the parts of the ear and suggest an easy way to remember all these complex shapes. At the end, I will show a step by step of an ear drawing. Basic Forms The simplified volume of the ear is very much like a megaphone. 30+ Very Useful Color Tools For Designers Choosing the right colors and color combination for your web or print design is crucial when trying to invoke a certain feel, reaction or emotion from your viewers. In this post I have assembled an amazing collection of color selectors / color combination tools to make the selection process a little easier when trying to figure out what colors to use in your next design. All these tools are unique in their own way, so find the one that is right for your design needs and good luck with that next big project. Enjoy! kuler.adobe.com

Emma Goldman Emma Goldman (June 27 [O.S. June 15], 1869 – May 14, 1940) was an anarchist known for her political activism, writing, and speeches. She played a pivotal role in the development of anarchist political philosophy in North America and Europe in the first half of the 20th century. In 1917, Goldman and Berkman were sentenced to two years in jail for conspiring to "induce persons not to register" for the newly instated draft. After their release from prison, they were arrested—along with hundreds of others—and deported to her native Russia. Interesting animal hand-drawn map Elephant, the eagle, crocodile, a leopard, zebra, giraffe, you can see these animals are both hands with coloured drawing or pattern simulated?