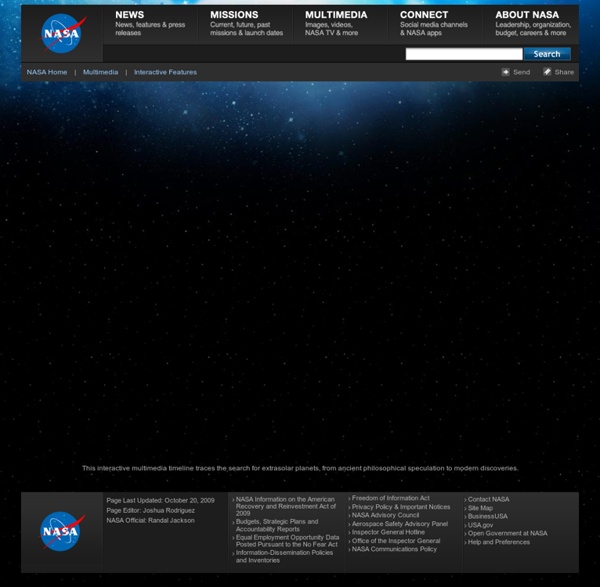 Related:  Space and NASA • Interactives • The Only Earth We Have

Five Nice NASA Resources for Teachers and Students NASA's website full of excellent educational resources. I just did a quick look through my archives and over the last few year I've written about NASA-related topics more than sixty times. Here are five of the most popular NASA resources for teachers and students that I've covered over the years. NASA's Lunar Electric Rover Simulator is a free iOS app that lets you explore the moon.

Moonbase Alpha on Steam About This Game NASA has once again landed on the lunar surface with the goal of colonization, research, and further exploration. Shortly after the return to the Moon, NASA has established a small outpost on the south pole of the moon called Moonbase Alpha. Utilizing solar energy and regolith processing, the moonbase has become self-sufficient and plans for further expansion are underway. In Moonbase Alpha, you assume the exciting role of an astronaut working to further human expansion and research.

UN experts denounce 'myth' pesticides are necessary to feed the world The idea that pesticides are essential to feed a fast-growing global population is a myth, according to UN food and pollution experts. A new report, being presented to the UN human rights council on Wednesday, is severely critical of the global corporations that manufacture pesticides, accusing them of the “systematic denial of harms”, “aggressive, unethical marketing tactics” and heavy lobbying of governments which has “obstructed reforms and paralysed global pesticide restrictions”. The report says pesticides have “catastrophic impacts on the environment, human health and society as a whole”, including an estimated 200,000 deaths a year from acute poisoning.

Curiosity Cabinet Over the past 25 years I have accumulated a collection of various gizmos, devices, toys etc. which to me are excellent examples of scientific principles or things that you look at and you say "That's impossible!" except it's staring you in the face. In the hope that others may also find them interesting and with the help of two undergraduates, Jacy Lundberg and Omar Khan, we have created videos of many of the items in the collection. In many cases we have tried to include explanations of how they work or references to where one can find this information. Jacy and Omar are currently seniors in the Boston College pre-medical program.

Types of Wind Turbines Used Today Capturing the earth’s natural energy through wind was once an abstract idea. Eventually, however, engineers were able to focus the idea and put it into action through innovative technology. Throughout the development of wind turbines, many prototypes were created, and many of the first ones designed are still used today, just with more modern engineering. Here are a few of the different wind turbines we are used to seeing today, and some we definitely are not.

Universe's Ordinary Matter Detailed in New Study Dec 03, 2015 10:14 AM EST By Russell Westerholm, UniversityHerald Reporter (r.westerholm@universityherald.com) Whereas the universe is made up mostly of dark matter, which is only detectable when it interacts with other objects, another material ever-present is ordinary matter. Like Us on Facebook Advertisement Published in the journal Nature, the new study detailed how ordinary matter makes up less than five percent of the universe, though it is the only matter we know on Earth.

How climate change may drive extreme weather —Whether a specific extreme weather event can be linked to climate change rarely gets a straightforward answer from climate scientists or meteorologists. It's complicated, they'll say, but that doesn't mean there isn't a relationship. "Climate scientists have been willing to link the general increase in certain types of weather extremes (heat waves, droughts, and floods) to climate change in a generic sense," says Michael Mann, an atmospheric scientist at Pennsylvania State University. Rising global temperatures and other climate forces can certainly change the conditions that underlie weather, which climate scientists have said can lead to a change in the frequency of a type of weather event. But Dr. Mann and colleagues report that there is a more direct way that climate change is impacting weather extremes: by altering the movement of the jet stream.