NASA Confesses to Dosing Americans with Air-borne Lithium and Other Chemicals. There’s the official explanation for why NASA is spraying lithium, a pharmaceutical drug most often used to treat people with manic depression or bi-polar disorder, into our ionosphere, and then there is the probable reason(s). 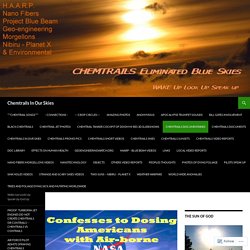 It would be easier to accept NASA’s official explanation if they were not so secretive about everything they study and do in space – but one thing is for certain – NASA’s own personnel have admitted that lithium, along with other chemicals, are intentionally being placed into our environment regularly. It is possible that many of NASA’s own employees aren’t even aware of the true motivations for carrying out such a project, ironically displaying the very behaviors that these chemicals/pharmaceuticals are meant to instill. In the first bomb-shell video a NASA employee (Douglas.e.rowland@nasa.gov) admits that lithium is being sprayed in the atmosphere, and says that it is “harmless to the environment.” Of course, we can’t ignore the USA. Location: Wallops Range. SpaceX to fly tourists to the Moon NEXT YEAR opening up route to WORLD. Planned for late 2018, the unnamed pair have already paid a “significant deposit” for the mission according to SpaceX CEO Elon Musk. 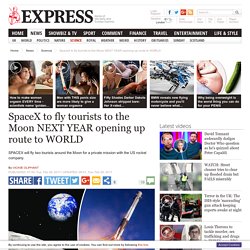 And they will travel aboard the private company’s Crew Dragon capsule which is set for its first unmanned test flight this year. Mr Musk claimed the co-operation of NASA had made the plan possible, adding the two passengers "will travel faster and further into the solar system than any before them". The CEO said: "This presents an opportunity for humans to return to deep space for the first time in 45 years.” But he declined to comment on the identity of the two individuals who approached the company last year, only saying that they knew each other and that it’s “nobody from Hollywood”. 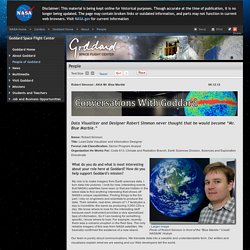 Blue Marble Name: Robert SimmonTitle: Lead Data Visualizer and Information DesignerFormal Job Classification: Senior Program Analyst Organization He Works For: Code 613, Climate and Radiation Branch, Earth Sciences Division, Sciences and Exploration Directorate Our team is purely about communications. We translate data into a useable and understandable form. Brace yourself The US NAVY & NASA have a fully operational ‘Space Fleet’ 038 The Space Lie, Denying Understanding of Where You Exist. NASA Brings Scientists & Theologians Together To Prepare World For Extraterrestrial Contact. A couple of months ago top US astronomers gathered in front of Congress to let them know that extraterrestrial life exists – without question. 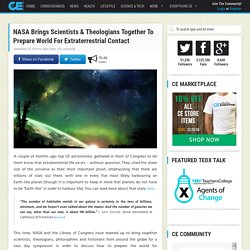 They cited the sheer size of the universe as their most important proof, emphasizing that there are trillions of stars out there, with one in every five most likely harbouring an Earth-like planet (though it is important to keep in mind that planets do not have to be “Earth-like” in order to harbour life). You can read more about that story here. “The number of habitable worlds in our galaxy is certainly in the tens of billions, minimum, and we haven’t even talked about the moons. And the number of galaxies we can see, other than our own, is about 100 billion.” – Seth Shostak, Senior Astronomer at California’s SETI Institute (source) NASA Lies About The Hubble Telescope. Jeff Rense & Clark McClelland - The Truth About NASA. 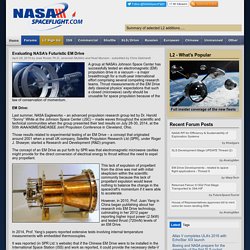 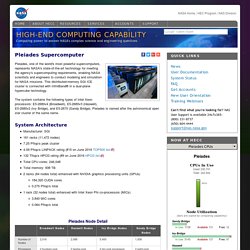 This distributed-memory SGI ICE cluster is connected with InfiniBand® in a dual-plane hypercube technology. The system contains the following types of Intel Xeon processors: E5-2680v4 (Broadwell), E5-2680v3 (Haswell), E5-2680v2 (Ivy Bridge), and E5-2670 (Sandy Bridge). Traveling to Mars with Immortal Plasma Rockets. Nearly 50 years after landing on the moon, mankind has now set its sights on sending the first humans to Mars. 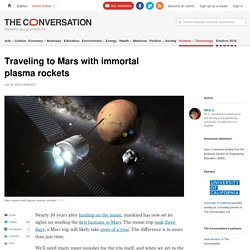 The moon trip took three days; a Mars trip will likely take most of a year. The difference is in more than just time. We’ll need many more supplies for the trip itself, and when we get to the Red Planet, we’re going to need to set up camp and stay for a while. Carrying all this material will require a revolutionary rocket technology. The Saturn V was the largest rocket ever built. Secret Space Program and Secret Technology 2015. Bases 53 Part 5 NHCUs. NASA Insider Exposes the Flat Earth! NASA Insider "We Lied About Everything" - The International Space Program Exposed. New Horizons Finds Blue Skies and Water Ice on Pluto. The newest high-resolution images of Pluto from NASA’s New Horizons are both dazzling and mystifying, revealing a multitude of previously unseen topographic and compositional details. 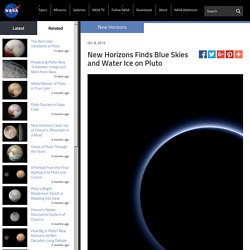 The image below -- showing an area near the line that separates day from night -- captures a vast rippling landscape of strange, aligned linear ridges that has astonished New Horizons team members. “It’s a unique and perplexing landscape stretching over hundreds of miles,” said William McKinnon, New Horizons Geology, Geophysics and Imaging (GGI) team deputy lead from Washington University in St. Louis. “It looks more like tree bark or dragon scales than geology. NASA Takes Chemtrail Spraying Program to Outer Space. By Terrence Newton Last week the National Aeronautics and Space Administration (NASA) successfully completed an experiment with a suborbital, or sounding, rocket aimed at testing out new technologies before integrating them into other projects. 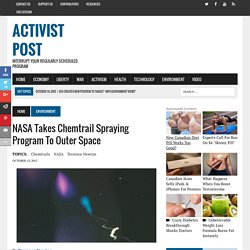 The suborbital flight on October 7th was launched from the Wallops Flight Facility in Virginia on the Eastern seaboard of the United States, testing a ‘modified Black Brant sounding rocket motor, launch vehicle and spacecraft systems and sub-payload ejection technologies.’ [1] Interesting enough, but during the test they released a number of vapor clouds into the atmosphere, releasing a mixture of chemicals that are well-known to those who are closely examining the growing problem of geoengineering and chemtrails. Mission Manager Update: K2 in Campaign 4. A newly discovered exoplanet, Kepler-452b, comes the closest of any found so far to matching our Earth-sun system. 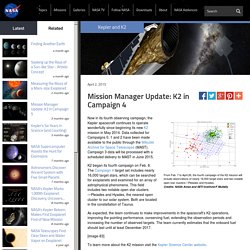 This artist’s conception of a planetary lineup shows habitable-zone planets with similarities to Earth: from left, Kepler-22b, Kepler-69c, the just announced Kepler-452b, Kepler-62f and Kepler-186f. Last in line is Earth itself. Credits: NASA/Ames/JPL-Caltech Of the 1,030 confirmed planets from Kepler, a dozen are less than twice the size of Earth and reside in the habitable zone of their host stars. Project Constellation. From Wikipedia... Project Constellation is a NASA program to create a new generation of spacecraft for human spaceflight, consisting primarily of the Ares I and Ares V launch vehicles, the Orion crew capsule, the Earth Departure Stage and the Lunar Surface Access Module. These spacecraft will be capable of performing a variety of missions, from Space Station resupply to lunar landings. Most of the Constellation hardware is based on systems originally developed for the Space Shuttle, although Orion's two-part crew and service module system is heavily influenced by the earlier Apollo Spacecraft.

Proposed Constellation missions may employ both Earth Orbit Rendezvous and Lunar Orbit Rendezvous techniques. On July 31, 2005, the Orlando Sun published the first story detailing NASA's thinking on Project Constellation. NASA pdf "Future Strategic Issues-Future Warfare" ... cleID=3889 Posted On: July 6th, 2012 Source: Imagine a cheap, tiny, hovering aerial drone capable of being launched with the flick of a person’s wrist and able to provide manipulable 360-degree surveillance views. It’s real, it’s inspired by maple seeds, and the company behind it, Lockheed Martin, envisions a future in which swarms of the new drones can be deployed at a fraction of the cost and with greater capabilities than drones being used today by the military and other agencies.

“Think about dropping a thousand of these out of an aircraft,” said Bill Borgia, head of Lockheed Martin’s Intelligent Robotics Lab, in a phone interview with TPM, “Think about the wide area over which one collect imagery. The new drone which looks like very similar to a maple seed, with a small pod-like body attached a single whirring blade, is called the Samarai. “You can literally pull this out of your pocket, throw it into the air, and it can start flying,” Borgia told TPM.

NASA Warp Drive Project - "Speeds" that Could Take a Spacecraft to Alpha Centauri in Two Weeks. Nasa's Nazis & the Great Pyramid Weapon System. The Lie NASA Told improved audio version. NASA Discovers Hidden Portals In Earth’s Magnetic Field. Our planet has come a long way in scientific breakthroughs and discoveries. Mainstream science is beginning to discover new concepts of reality that have the potential to change our perception about our planet and the extraterrestrial environment that surrounds it forever.

Star gates, wormholes, and portals have been the subject of conspiracy theories and theoretical physics for decades, but that is all coming to an end as we continue to grow in our understanding about the true nature of our reality. In physics, a wormhole was a hypothetical feature of space time that would be a shortcut through space-time. We often wonder how extraterrestrials could travel so far and this could be one of many explanations.

Although scientists still don’t really understand what they have found, it does open the mind to many possibilities. NASA: The End Of Mankind "Leaked Document" 2013. The True History and Purpose of NASA. NASA Finds Three Super-Earths in Stars’ Habitable Zones. NASA’s Kepler space telescope has discovered three planets that may be able to support life, while one of them is the most earth-like world spotted to date, scientists say. Two exoplanets have been discovered in their stars’ habitable zones, what is known as just the right range of distance where liquid water can exist on a planet’s surface. NASA Report verifies Carbon Dioxide actually Cools Atmosphere.

Practically everything you have been told by the mainstream scientific community and the media about the alleged detriments of greenhouse gases, and particularly carbon dioxide, appears to be false, according to new data compiled by NASA's Langley Research Center. As it turns out, all those atmospheric greenhouse gases that Al Gore and all the other global warming hoaxers have long claimed are overheating and destroying our planet are actually cooling it, based on the latest evidence. NASA Expert Warns of Coming Catastophic Event in AUGUST 2013 (MUST SEE) The Black Budget: Top secret U.S. intelligence funding - Interactive Graphic - Washington Post. NASA FUTURE OF WARFARE.

NASA-USAF SPACECOM-BOEING SVS Directed Energy US Military Space Weapons Platform. NASA WAR DOCUMENT vs HUMANITY FOUND ON NASA SITE. MAKE VIRAL NOW. NASA Reports on your death plan Circa 2025, be Warned!!! NASA Contributes to The Evolution of the Humanoid Robot With "Valkyrie" This is an update to the ongoing technocratic mission to replace humans with robots.

NASA ANNOUNCEMENT!! ISS Data to be Shut Off in TWO Weeks! (22nd March 2014) NASA morphing aircraft. NASA Releases Hundreds of Computer Codes Free to Public – Mngt Systems, Design Tools, Data Handling, Image Processing, Life Support, Aeronautics, Structural Analysis and Many More… Dr Steven Greer The Real Story Behind The Closure of the Space Shuttle Program. NASA unveils prototype humanoid robot. The robot looks like something from a science fiction movie. Image Credit: IEEE Spectrum The American space agency has revealed that it has been developing a 6ft robot known as Valkyrie. NASA's RoboSimian Advances to DARPA Robotics Challenge Finals. If you think robots need look like humans to be able to use human tools or rescue people in danger, then you don't know NASA's RoboSimian. NASA Expert: Chemtrails are Real and Rogue Geoengineers Could Blackmail the Earth.