Bellatrix Orionis - Views from the edge of the Universe 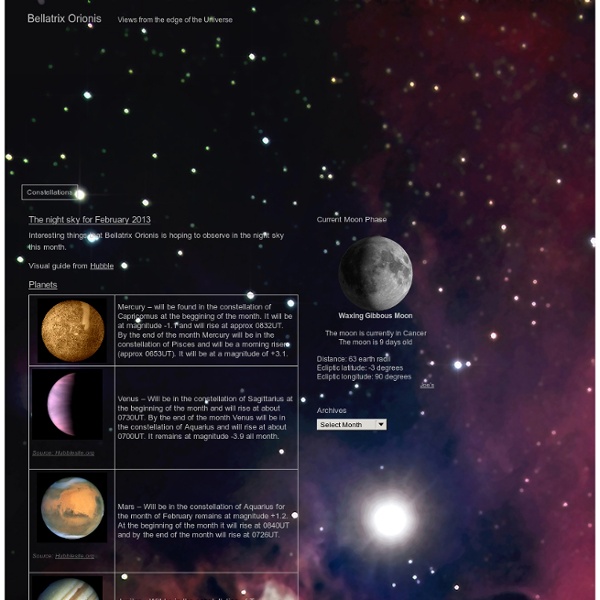 Scientists Discover The Oldest, Largest Body Of Water In Existence--In Space Scientists have found the biggest and oldest reservoir of water ever--so large and so old, it’s almost impossible to describe. The water is out in space, a place we used to think of as desolate and desert dry, but it's turning out to be pretty lush. Researchers found a lake of water so large that it could provide each person on Earth an entire planet’s worth of water--20,000 times over. Yes, so much water out there in space that it could supply each one of us all the water on Earth--Niagara Falls, the Pacific Ocean, the polar ice caps, the puddle in the bottom of the canoe you forgot to flip over--20,000 times over. The water is in a cloud around a huge black hole that is in the process of sucking in matter and spraying out energy (such an active black hole is called a quasar), and the waves of energy the black hole releases make water by literally knocking hydrogen and oxygen atoms together. The new cloud of water is enough to supply 28 galaxies with water.

HelloFromEarth.net | Gliese 581d This site collected goodwill messages from the public for 13 days in August 2009 which were transmitted to Gliese 581d, a planet outside our Solar System which may support life. Messages were moderated by staff at COSMOS magazine; those accepted for inclusion in the transmission have been published on this site. Transmission occurred at midday on Friday 28 August 2009 and was undertaken by the NASA/CSIRO Canberra Deep Space Communication Complex at Tidbinbilla, Australia, using the 70-metre main antenna known as DSS43. Thanks for taking part in this National Science Week event! You can read our best messages below (see BEST MESSAGES SO FAR), see a list of what we think are the top messages received , or browse through all messages here . You can also search messages by the names of people who have successfully left a message, their email addresses or by message content. Stage fright! Alexandra Lynch Brisbane, Australia Yidigunmardin nuruku yajingewa wuremulu jandange. Yidumduma Bill Harney Yu

Interactive 3D model of Solar System Planets and Night Sky Earth - Your life on earth Explore BBC Earth's unique interactive, personalised just to you. Find out how, since the date of your birth, your life has progressed; including how many times your heart has beaten, and how far you have travelled through space. Investigate how the world around you has changed since you've been alive; from the amount the sea has risen, and the tectonic plates have moved, to the number of earthquakes and volcanoes that have erupted. Grasp the impact we've had on the planet in your lifetime; from how much fuel and food we've used to the species we've discovered and endangered. And see how the BBC was there with you, capturing some of the most amazing wonders of the natural world. Explore, enjoy, and share with your friends either the whole page, or your favourite insights. This is your story, the story of your life on earth. BBC Earth's Your life on earth is based on the following sources. Lead photo credit: John Kellerman / Alamy.