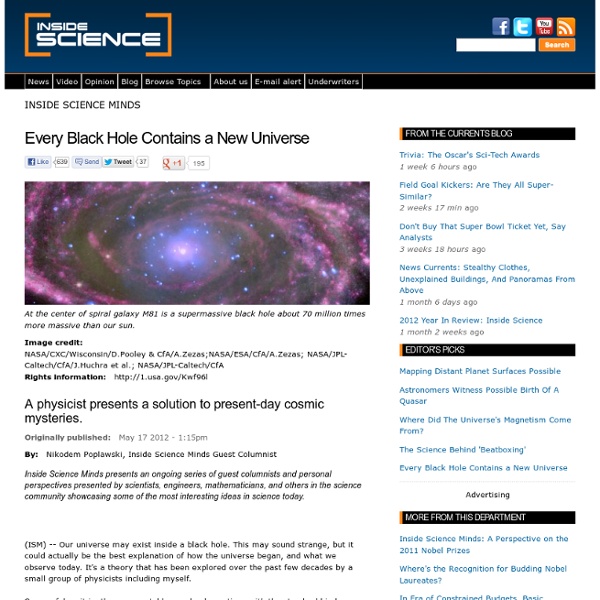 Inside Science Minds presents an ongoing series of guest columnists and personal perspectives presented by scientists, engineers, mathematicians, and others in the science community showcasing some of the most interesting ideas in science today. (ISM) -- Our universe may exist inside a black hole. This may sound strange, but it could actually be the best explanation of how the universe began, and what we observe today. It's a theory that has been explored over the past few decades by a small group of physicists including myself. Successful as it is, there are notable unsolved questions with the standard big bang theory, which suggests that the universe began as a seemingly impossible "singularity," an infinitely small point containing an infinitely high concentration of matter, expanding in size to what we observe today. But these theories leave major questions unresolved. The first is general relativity, the modern theory of gravity.

Field Guide to X-ray Astronomy :: Stellar Evolution Stellar Evolution The Milky Way Galaxy contains several hundred billion stars of all ages, sizes and masses. One of the central quests of astronomy is to understand how these star form, shine for billions of years, and eventually fade quietly into the dark as white dwarf, or go out with a bang as supernovas. Chandra and other X-ray telescopes focus on the high-energy action of this drama - sudden outbursts on the turbulent surfaces of stars, gale-force outflows of gas from hot, luminous stars, and awesome shock waves generated by supernova explosions. Overview of Stellar Evolution A Star is Born A star is born when a cloud of gas and dust collapses to the point where the material in the center of the clump is so dense and hot that the nuclear fusion of hydrogen nuclei into helium nuclei can occur. Hydrogen Burning Core (Main Sequence) Fusion of hydrogen into helium in the core of star can sustain a star such as the Sun for billions of years. Red Giants. Mass Matters.

PlanetInAction.com - The planet is your playground Around the Solar System - In Focus Robotic probes launched by NASA, the European Space Agency (ESA), and others are gathering information all across the solar system. We currently have spacecraft in orbit around the Sun, Mercury, Venus, Earth, Mars, and Saturn, and two operational rovers on Mars. Several others are on their way to smaller bodies, and a few are heading out of the solar system entirely. Although the Space Shuttle no longer flies, astronauts are still at work aboard the International Space Station, performing experiments and sending back amazing photos. With all these eyes in the sky, I'd like to take another opportunity to put together a recent photo album of our solar system -- a set of family portraits, of sorts -- as seen by our astronauts and mechanical emissaries. Use j/k keys or ←/→ to navigate Choose: Dozens of coronal loops gyrate above several active regions of the sun, as they were rotating into view on October 17, 2012. A Martian eclipse from the past.

Creating a Learning Environment for Young Children The following is an excerpt from Teaching Our Youngest. Introduction What do effective preschool teachers and child-care providers do? What does a classroom that can enhance learning look like? Effective preschool classrooms are places where children feel well cared for and safe. Young children need teachers who welcome all children to their classrooms, including children from various cultures, whose first language is not English and children who have disabilities. Effective preschool teachers and child care providers: Know when children can figure out new ideas and concepts on their own and when it is important to explain things to them step-by-step. A Classroom to Enhance Learning Ms. She uses cupboards, screens, and tables to divide her classroom into children's work areas. Most of the books on the bookcases come from the classroom library, but others are part of a revolving collection of books that Ms.

Qualtrics | Sophisticated Research Made Simple Life on Earth under threat from CO2 levels, say scientists - Climate Change - Environment Current CO2 emissions are currently tracking on the highest trajectory envisaged by climate scientists. That means if nothing is done to reduce emissions significantly over the coming decades, over half of common plants and one-third of the animals could see a serious decline, the study concluded. Scientists came to the assessment by estimating the current and future geographical ranges of nearly 50,000 widespread and common species to see how rising temperatures are likely to affect their territorial limits as defined by the sort of climate they are adapted to live in. Plants, amphibians such as frogs and toads, and reptiles such as lizards are the groups that are likely to suffer the most from a changing climate because of their relative vulnerability to rising temperatures and inability to move rapidly from one territory to another, the study found.

Google Sites for Teachers 2012 Edutech for Teachers » Tech Tip of the Week Gooru: Science & Math Resources February7 Resource: Gooru is new service whose mission is to provide teachers and students with a variety of multimedia resources – videos, diagrams, interactive displays, documents and quizzes – related to 5th–12th grade science and math topics. By creating a Gooru account, one has access to over 50,000 resources categorized into a variety of subject areas: earth science, biology, chemistry, geometry, and algebra to name a few. In addition to being able to search the Gooru resources by keyword, users can browse the Resource Library or check out Gooru favorites in the “Featured Resources” section as well. Another feature about Gooru that is worth mentioning is the fact that the site’s resources are vetted and published by educators and aligned to U.S. Integration Ideas: Use Gooru to increase student engagement and motivation to learn by connecting subject matter with 21st Century resources and real life applications. Tech Tip of the Week Archives February3

School and Education Technology Webinars eSchool News is proud to present a variety of webinars on the hottest topics in education technology. Our webinars are a great place to learn about new technologies, how your colleagues are solving concerns you may have and more. All of our webinars are free, just click on the links below to register. Can’t make the date or missed a previous webinar — don’t worry, our webinars are also recorded and archived. Introduction to 3D Printing Modules in the Classroom Tuesday, November 24th, 2015 1:00 pm EST / 10:00 am PST Date: Tuesday, November 24th Time: 1:00 pm EST / 10:00 am PST About the Event We are thrilled to be offering this upcoming webinar on how to incorporate 3D printing course content into your own K-12 classroom! How to Deploy a 1:1 iPad Program in Education Tuesday, October 20th, 2015 2:00 pm EST / 11:00 am PST Date: Tuesday, October 20th Time: 2:00 pm EST / 11:00 am PST About the Event So your school is about to launch an iPad program, and you’re not sure where to start?

Web 2.0 Science Tools By Laura Turner The following web2.0 sites would be useful for science educators at the high school and middle school level. Some would also be appropriate for higher elementary grade levels. Web 2.0 can also be described as the second round of new technology development and adoption. EcoKids This award-winning EcoKids web site is an interactive environmental web site for children, their families, and educators in Canada and around the world. Experience Math and Science with Gizmos (3-12) www.explorelearning.com This site features 450 interactive simulations for math and science. Exploratorium www.exploratorium.edu This site was one of the first science museums to build a site on the World Wide Web. Google Google SketchUp Create, modify, and share 3-d models! Explore with Google Google Earth for Educators St. Cosmic Zoom. (5-12) Celestia

Beyond 2012: Why the World Didn't End Beyond 2012: Why the World Didn't End If you're reading this story, it means the world didn't end on Dec. 21, 2012. Despite reports of an ancient Maya prophecy, a mysterious planet on a collision course with Earth, or a reverse in Earth's rotation, we're still here. The Mayan connection "was a misconception from the very beginning," says Dr. John Carlson, director of the Center for Archaeoastronomy. Video: Why The World Didn't End Yesterday For years leading up to the supposed apocalypse, NASA scientists worked to dispel the myths and answer questions on a host of 2012 topics: Question (Q): Are there any threats to the Earth in 2012? Answer (A):The world will not end in 2012. Q: What is the origin of the prediction that the world will end in 2012? A: The story started with claims that Nibiru, a supposed planet discovered by the Sumerians, is headed toward Earth. Q: Does the Mayan calendar end in December 2012? Video: NASA Scientist David Morrison Debunks the Myths A: Absolutely not.

50 Years of Incredible Space Images From the European Southern Observatory | Wired Science This week marks the 50th anniversary of one of the world’s leading astronomical institutions, the European Southern Observatory. In honor of ESO’s birthday, we take a look at some of its most stunning shots of the night sky, amazing objects in space, and the organization's beautiful telescope facilities. ESO started when astronomers from five European countries – Belgium, France, Germany, the Netherlands, and Sweden – came together on Oct. 5, 1962 to build a telescope in the Southern Hemisphere. Having a large telescope south of the equator gave these member states access to unprecedented clear skies and celestial objects that simply can’t be seen from the Northern Hemisphere, such as the Magellanic Clouds. Over the decades, many more countries have joined, including Denmark, Switzerland, Italy, Portugal, the United Kingdom, Finland, Spain, the Czech Republic, Austria, and, in 2010, Brazil, which became the first non-European state to join. Above: Image: ESO/J.