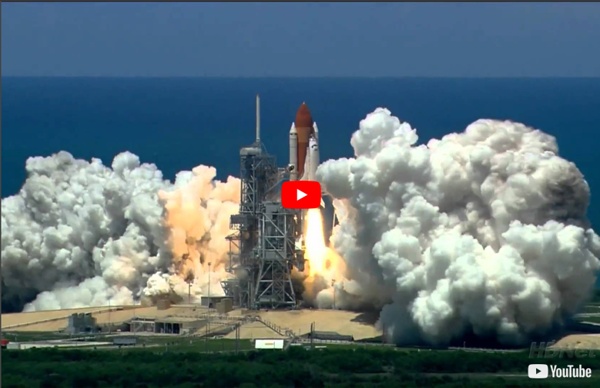 NASA Earth Observatory : Home FlyBoard Official | Official Site of the Flyboard in the US, Canada, Caribbean, Central America and South America Venus to appear in once-in-a-lifetime event On 5 and 6 June this year, millions of people around the world will be able to see Venus pass across the face of the Sun in what will be a once-in-a-lifetime experience. It will take Venus about six hours to complete its transit, appearing as a small black dot on the Sun's surface, in an event that will not happen again until 2117. In this month's Physics World, Jay M Pasachoff, an astronomer at Williams College, Massachusetts, explores the science behind Venus's transit and gives an account of its fascinating history. Transits of Venus occur only on the very rare occasions when Venus and Earth are in a line with the Sun. At other times Venus passes below or above the Sun because the two orbits are at a slight angle to each other. Building on the original theories of Nicolaus Copernicus from 1543, scientists were able to predict and record the transits of both Mercury and Venus in the centuries that followed. For more information see Wikipedia article.

Blood Moon Tunes: Music to Make Your 'Supermoon' Lunar Eclipse Rock As you settle in Sunday night (Sept. 27) to watch the supermoon lunar eclipse, kick back with some moon tunes as chosen by Space.com's staff. The moon has always fascinated humans, ever present and ever changing in the sky, and that fascination has inspired countless moon-based melodies. A full moon can mean romance or chaos and disaster; a thin silver sliver spells mystery, changeability or tranquility. Listen below to some moon favorites: NASA has contemplated the moon in song as well: Steven Williams from NASA's Planetary Science Division pulled together an infographic and long list of moon-inspired refrains. The infographic pulls out classic moon tunes, songs about the Apollo moon missions, and even songs for a rainbow of multicolored moons (from "Red Moon" by The Walkmen down to "Kiko and the Lavender Moon" by Los Lobos). To prepare for Sunday's eclipse, check out Space.com's viewing guide or catch up on the science behind it.

Vampire Woman turns heads at tattoo fest | Video | Reuters.com Can hot water freeze faster than cold water? [Physics FAQ] - [Copyright] Written Nov, 1998 by Monwhea Jeng (Momo), Department of Physics, University of California Yes — a general explanation History of the Mpemba Effect More-detailed explanations References Yes — a general explanation Hot water can in fact freeze faster than cold water for a wide range of experimental conditions. The phenomenon that hot water may freeze faster than cold is often called the Mpemba effect. This seems impossible, right? What's wrong with this proof is that it implicitly assumes that the water is characterized solely by a single number — its average temperature. It is still not known exactly why this happens. Why hasn't modern science answered this seemingly simple question about cooling water? So with the limited number of experiments done, often under very different conditions, none of the proposed mechanisms can be confidently proclaimed as "the" mechanism. Finally, supercooling may be important to the effect. History of the Mpemba Effect Evaporation

Our SpaceFlight Heritage: One giant leap, the flight of Apollo 11 Forty-six years ago today, the crew of Apollo 11 lifted off for the Moon - and the history books. Photo Credit: NASA Gregory Cecil July 16th, 2015 Forty-six years ago today, on July 16, 1969, the crew of Apollo 11 lifted off from Launch Complex 39A at NASA’s Kennedy Space Center in Florida – for the Moon. After two prior flights that went on to orbit the Moon by the crews of Apollo 8 and Apollo 10, the trio of Apollo 11 was ready to fulfill the late President Kennedy’s goal of, “… I believe that this nation should commit itself to achieving the goal, before this decade is out, of landing a man on the Moon and returning him safely to the Earth.” The three spaceflight veterans included the mission’s commander, Neil Armstrong, the command module pilot Michael Collins, and lunar module pilot Edwin “Buzz” Aldrin. Each of them was experienced, having flown before on previous missions during the Gemini Program. In attendance for the launch was Charles Lindbergh, a guest of Neil Armstrong.

Our Spaceflight Heritage: The first steps of Apollo 11 Astronaut Buzz Aldrin is photographed by Neil Armstrong during an EVA on the Moon. Photo Credit: Neil Armstrong / NASA Heather Smith July 20th, 2014 July 20, 1969, astronauts Neil Armstrong and Buzz Aldrin became the first men to ever walk on the moon, cementing America’s lead in the 1960s space race. Buzz Aldrin collecting a sample of the lunar soil. The landing successfully occurred at 3:17:40 p.m. Command and Service Modules in the Manned Spacecraft Operations Building. Apollo was a three-part spacecraft: the command module (CM), the crew’s quarters and flight control section; the service module (SM) for the propulsion and spacecraft support systems (when together, the two modules are called the CSM); and the lunar module (LM), to take two of the crew to the lunar surface, support them on the Moon, and return them to the CSM in lunar orbit. The CM, 12 feet (3.63 meters) long and shaped like a blunt cone, was at the front or top of the main spacecraft. When all was said and done?

sleepyti.me bedtime calculator Our SpaceFlight Heritage: Remembering Apollo 10 Photo Credit: John Young / NASA David Darling May 18th, 2014 On May 18th, 1969, at 12:49 p.m. The plume from Apollo 10’s Saturn V rumbles outward. Apollo 10’s main purpose was to test rendezvous and docking operations between the Command and Service Module (CSM) and the Lunar Module (LM) in lunar orbit. Up to this point, the mission had gone entirely to plan without any undue alarms. Splashdown took place in the Pacific Ocean at 12:52 p.m. Photo Credit: NASA A whole slew of records was set by the Apollo 10 mission. “I had flown two flights before, you know space is so beautiful when you look down at the Earth with all that you see – but all we had was the Hasselblad film and little 16 millimeter cameras, it was just short clips. Apollo 10 was the only mission in the series to lift off from Launch Complex 39B at the Cape and the first to carry a color TV camera aboard a crewed spacecraft. Snoopy’s fate however would be different from that of its kin. Welcome to The Spaceflight Group! Dr.

The 2011 Nobel Prize in Physics - Press Release 4 October 2011 The Royal Swedish Academy of Sciences has decided to award the Nobel Prize in Physics for 2011 with one half to Saul Perlmutter The Supernova Cosmology Project Lawrence Berkeley National Laboratory and University of California, Berkeley, CA, USA and the other half jointly to Brian P. and Adam G. "for the discovery of the accelerating expansion of the Universe through observations of distant supernovae" Written in the stars "Some say the world will end in fire, some say in ice..." * What will be the final destiny of the Universe? In 1998, cosmology was shaken at its foundations as two research teams presented their findings. The research teams raced to map the Universe by locating the most distant supernovae. The teams used a particular kind of supernova, called type Ia supernova. For almost a century, the Universe has been known to be expanding as a consequence of the Big Bang about 14 billion years ago. Saul Perlmutter, U.S. citizen. Brian P. Adam G. Recommended:

Gecko inspired anchors Scientists at NASA's Jet Propulsion Laboratory (JPL) are honing the applications of a gecko-like gripping mechanism in the hope of making life a little less chaotic for those working aboard the International Space Station (ISS). The ever-inventive JPL workers have come up with a series of "astronaut anchors" for use both inside and outside the station, and have even equipped a robot with the tech, opening up the possibility of allowing it to safely operate on the exterior of the space station. Living in space is considerably more difficult than it is back on Earth. Everything is just that little bit more floaty, and whilst astronauts have an impressive arsenal of contraptions and railings to hang on to up there, it's inevitable that the general lack of gravity is going to hurt productivity. Using a biomimetic approach, NASA scientists are planning to give astronauts a new and highly versatile tool with which to manipulate the unruly microgravity environment. Source: NASA JPL