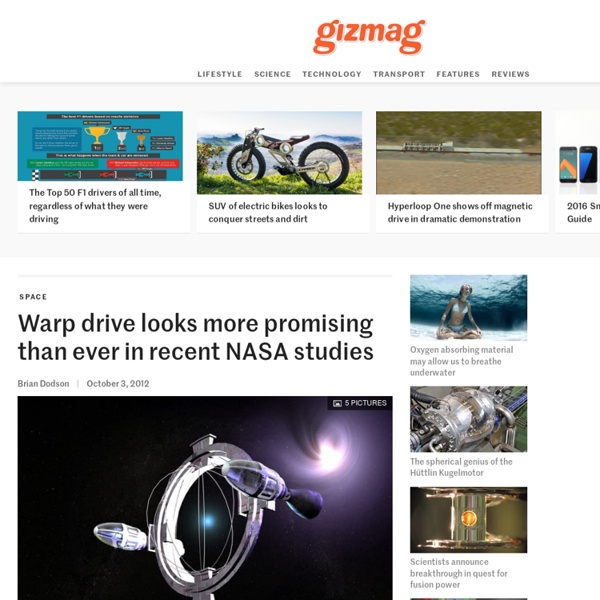 "Interstellar travel may still be in its infancy, but adulthood is fast approaching, and our descendants will someday see childhood's end." The Starflight Handbook The first steps towards interstellar travel have been taken, but the stars are very far away. Voyager 1 is about 17 light-hours distant from Earth and is traveling with a velocity of 0.006 percent of light speed, meaning it will take about 17,000 years to travel one light-year. Fortunately, the elusive "warp drive" now appears to be evolving past difficulties with new theoretical advances and a NASA test rig under development to measure artificially generated warping of space-time. The warp drive broke away from being a wholly fictional concept in 1994, when physicist Miguel Alcubierre suggested that faster-than-light (FTL) travel was possible if you remained still on a flat piece of spacetime inside a warp bubble that was made to move at superluminal velocity. This sounds too easy, and in many ways, it is.

Did Nikola Tesla discover the secrets of Antigravity? Nikola Tesla is considered one of the most innovative and mysterious men who ever lived. If Tesla hadn’t invented and researched everything he did in his time, our technology today would be considerably worse. but is there something more to Tesla? Did he in fact have contact with Aliens as he publicly proclaimed? He is one of the most amazing inventors our civilization has ever known his knowledge and ideas went far and beyond what was known and accepted in his lifetime. Nikola Tesla has been credited with creating much of the technology that we today take pretty much for granted. Without the incredible ideas and inventions of Tesla we would not have radio, TV, AC electricity, the Tesla Coil, fluorescent lighting, neon lights, radio controlled devices, robotics, X-rays, radar, microwave and dozens of other amazing inventions that make our lives AWESOME.

New ion engine could reach Mars in 39 days Last week, as the world celebrated the first lunar landing, Apollo 11 astronauts Buzz Aldrin and Michael Collins both called for NASA to make Mars its next goal. But the chemical propulsion system that took them to the moon would take six months, at least, to get a man to Mars and cost hundreds of billions of dollars. However, a new ion plasma rocket being developed by another former astronaut, Franklin Chang-Diaz, could potentially reach Mars in just 39 days using a fraction of the fuel. The problem with traditional rockets is that they’re terribly inefficient. About 90% of a mission’s initial weight is fuel, most of which is burned up escaping earth’s gravitational pull. After that, a traditional rocket could only slowly coast to Mars.

UFOs, ETs, and Alien Abductions: What We Know [disinfo ed.'s note: In this excerpt from UFOs, ETs, and Alien Abductions, psychologist and researcher Don Donderi examines the evidence and research from the past several decades on the changing nature of UFOs. He looks at why the scientific establishment takes a dim view of UFOs and abduction evidence and examines how the US government has collected and suppressed UFO evidence.] NASA Reveals Latest Warp-Drive Ship Designs Look at the picture above. Nope, it’s not a snapshot of a Star Wars scene, or any other sci-fi movie. It’s what you get if you combine a NASA physicist working on achieving faster-than-light travel with a 3D artist, and the result is freaking AWESOME. And yes, you heard correctly, there are scientists working on faster-than-light travel, and this is what the ship could look like in the future.

Dr Paul LaViolette - Secret Space Program Dr. LaViolette is the first to predict that high intensity volleys of cosmic ray particles travel directly to our planet from distant sources in our Galaxy, a phenomenon now confirmed by scientific data. He is also the first to discover high concentrations of cosmic dust in Ice Age polar ice, indicating the occurrence of a global cosmic catastrophe in ancient times. The 2020 Mars Rover Has Awesome Toys are they discussing possible landing sites yet? They are discussing them. They have not finalized anything and they will not finalize anything for several years. So the landing site selection is complicated by several things:

Star Trek Enterprise vs. Star Wars Millennium Falcon: Which Ship is Fastest? Alpha Centauri Closest star, 4.2 ly Click again to skip race. 'Impossible' Space Engine May Actually Work, NASA Test Suggests It's really starting to look as if an "impossible" space propulsion technology actually works. Researchers at NASA's Johnson Space Center in Houston have found that a microwave thruster system that requires no propellant does indeed generate a small amount of thrust, Wired UK reported Thursday (July 31). If the technology pans out, it could make spaceflight far cheaper and speedier, potentially opening up much of the cosmos to exploration, advocates say. "Test results indicate that the RF [radio frequency] resonant cavity thruster design, which is unique as an electric propulsion device, is producing a force that is not attributable to any classical electromagnetic phenomenon and, therefore, is potentially demonstrating an interaction with the quantum vacuum virtual plasma," the NASA team wrote in their study, which they presented Wednesday (July 30) at the 50th Joint Propulsion Conference in Cleveland.

Scalar Waves and Free Energy By John Maguire, contributor for Blue-Science.org What is a “scalar wave” exactly? Scalar waves (hereafter SW) are often likened to “longitudinal” waves. SpaceHabs: One man's architectural vision for colonizing Mars With a projected settlement date of 2025, the Mars One project has received over 200,000 applications for the one way trip to the Red Planet. But creating a living, sustainable community on the distant planet for the select inhabitants will require not only unique technological and engineering solutions, but also novel architectural systems. Bryan Versteeg is a conceptual designer who’s been working with the Mars One team in anticipation of the planet’s eventual colonization. View all Versteeg is the founder of SpaceHabs.com, which launched in 2011 in order to focus on the conceptual visualization for space exploration after he was approached by the founders of the Mars One Foundation.

The Black Knight Returns: Space Junk or Alien Eavesdropper? Astronomers across the world make a game of spotting secret government spy satellites, tracking them, and sometimes sharing the information with plausible deniability. Not everything in Earth orbit has a prosaic explanation like this object. First publicized in Disneyland Of The Gods , John Keel wrote of an object observed in polar orbit. New Propulsion System could Revolutionize Space Travel NASA has announced that an experimental propulsion system that needs only energy from sunlight appears to produce sufficient thrust to power spacecraft. This means that, once a spacecraft is in orbit, it will be able to accelerate away from the earth to the edges of the solar system, without fuel. This means that travel throughout the solar system is going to become much more possible and far cheaper. Researchers at the Johnson Space Center in Houston have determined that a microwave thruster system that requires no propellant generates a small but useful amount of thrust. In a paper published by the Eagleworks Laboratories, Nasa engineers confirmed that they had produced tiny amounts of thrust from an engine without fuel.

Anti-gravity Effect? Gravitational Equivalent Of A Magnetic Field Measured In Lab Scientists funded by the European Space Agency have measured the gravitational equivalent of a magnetic field for the first time in a laboratory. Under certain special conditions the effect is much larger than expected from general relativity and could help physicists to make a significant step towards the long-sought-after quantum theory of gravity. Just as a moving electrical charge creates a magnetic field, so a moving mass generates a gravitomagnetic field.