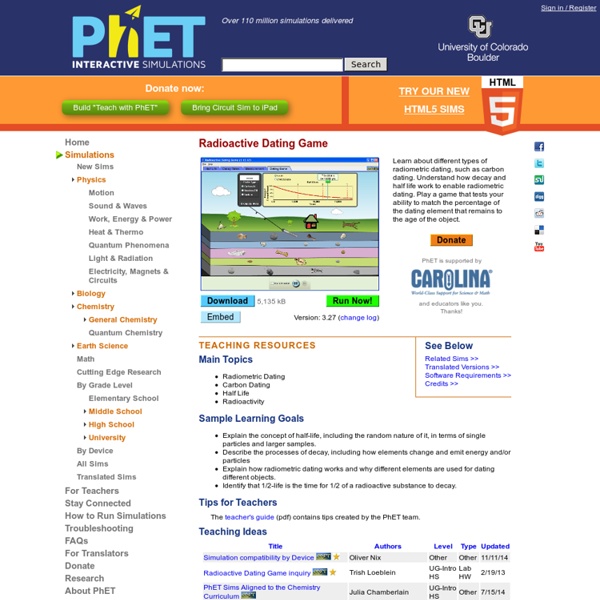 PhET Lab: Plate Tectonics Topics Plate Tectonics Crust Lithosphere Mantle Density Buoyancy Earth Science Description Explore how plates move on the surface of the earth. Sample Learning Goals Describe the differences between oceanic and continental crust, including their respective properties of density, composition, temperature and thickness.Predict how changes in composition and temperature change crust density and buoyancy.Draw a time series for different types of plate boundaries and their motions, indicating the related surface features.Deduce the type of plate boundary given images or descriptions of surface features.Explain which types of plate boundaries create crust, and which destroy crust Version 1.02

Halflife The applet lists a "halflife" for each radioactive isotope. What does that mean? The halflife is the amount of time it takes for half of the atoms in a sample to decay. The halflife for a given isotope is always the same ; it doesn't depend on how many atoms you have or on how long they've been sitting around. For example, the applet will tell you that the halflife of beryllium 11 is 13.81 seconds. Hmmm...so a lot of decays happen really fast when there are lots of atoms, and then things slow down when there aren't so many. That's exactly right. Notice how the decays are fast and furious at the beginning and slow down over time; you can see this both from the color changes in the top window and from the graph. You'll also notice that the pattern of atoms in the top picture is random-looking, and different each time you run the applet, but the graph below always has the same shape.

Virtual Labs The links on this page are all VIRTUAL LABS offered by the Glencoe textbook company. These labs give the students the adventure of laboratory experimentation without costly supplies, worrisome environmental and safety issues, or time-consuming clean up. They are from all different areas of science: Biology, Physics, Genetics, Earth Science, Physical Science, and Chemistry. Please feel free to try these at home! To return to the home page, please click here: Virtual Labs 1) What strategies are involved in solving a science problem? 2) How does thermal energy affect the state of a substance? 3) How can minerals be defined by their properties? 4) How are rocks classified? 5) What are the advantages of alternative energy sources? 6) How can locations in the United States be identified by their geographic features? 7) How are materials from the Earth broken down? 8) How do glaciers shape the land? 9) How do certain factors affect the erosion of soil by water? 21) How can we conserve water? 106) Mammals

Geologic Time Projects/Labs: lewiston Radiometric Dating Atom Decay and Half-Life Simulation. Click Link: Alpha Particles = 2 protons and 2 neutrons bonded together into a particle identical to a helium nucleus. Beta Particles = High speed/high energy electrons emitted by certain types of radioactive nuclei. Go to this web site for practice in radiometric dating. Have fun! Print this worksheet and complete it as you go through the simulation: Radioactive dating game Sim WS1.doc

Interactive General Science Lessons | Interactive Science Teacher Solid Lessons Most importantly, every lesson is classroom-tested. Each science lesson stays focused on, and builds around, standards that students are expected to understand. Strong Teacher Support I feel that since you’re the one presenting the lesson, it’s crucial that you understand it and be fully prepared. PowerPoints Most lessons include a custom-made PowerPoint that will guide you and your students through the lesson. Numbers Well over 100 Interactive Science Lessons, hundreds of clear and concise PowerPoint slides, 50 hours of video instruction for you, and hundreds of pictures and drawings. Let me add one more number- 10x. Extra Goodies Many lessons include “Accessories” that you can choose to customize your lessons with, additional homework assignments, answer keys, quizzes and tests, and other suggested resources.

Cascades Volcano Observatory Why Study Cascade Volcanoes? Cascade Range Active volcanoes dominate the skyline of the Pacific Northwest. The familiar snow-clad peaks of the Cascade Range are part of a 1,300 km (800 mi) chain of volcanoes, which extends from northern California to southern British Columbia. Cascade volcanoes have erupted in the recent past and will erupt again. The time between eruptions is usually measured in decades or centuries, so eruptions are not a part of our everyday experience. Eruptions in the Cascade Range during the past 4000 years. During the past 4,000 years, periods of eruptive activity at various Cascade volcanoes have lasted for a few to tens of years per century. Mount Baker–1843, steam blast, ash fall, debris avalancheMount St. Mount Hood dominates the skyline outside of Portland, Oregon on a clear day. Population growth means increase in risk. As population increases in the Pacific Northwest, areas near the volcanoes are becoming developed and more people and property are at risk.

Forms of Energy: Motion, Heat, Light, Sound What forms of energy is Raul using to move his LEGO car? When he was a teenager in Romania, Raul Oaida became obsessed with building things: a jet-engine bike, a tiny spaceship, a LEGO car that runs on air. Why? Well, why not? You can see more cool stories about energy at The Adaptors website. Like video and audio? Energy comes in two basic forms: potential and kinetic Potential Energy is any type of stored energy. Kinetic Energy is found in movement. Energy can shift between forms, but it is never destroyed or created. A car transforms the potential energy trapped in gasoline into various types of energy that help the wheels turn and get the car to move. Power plants transform one form of energy into a very useful form, electricity. These transformations are hardly perfect. Forms of Potential Energy Systems can increase gravitational energy as mass moves away from the center of Earth or other objects that are large enough to generate significant gravity (our sun, the planets and stars).

Geologic Hazards Some volcanic eruptions are mild and slow, while others are powerful and dramatic. An eruption happens when magma, gases, or steam break through vents in the Earth's surface. A mild eruption may simply discharge steam and other gases, or quietly extrude lava. A strong eruption can consist of violent explosions that send great clouds of gas-laden debris into the atmosphere, or may consist of explosions that blast sideways from a collapsed portion of the volcano, as happened in the 1980 eruption of Mount St. Eruptions can alter the land and water locally through lava flows, lahars, pyroclastic flows, and landslides. A lava flow moves through an intersection. Lava entering the sea poses special risks. A lahar is a mixture of volcanic ash, rock, debris, and water that can travel quickly down the slopes of a volcano. A pyroclastic flow is a rapidly-moving mixture of hot, dry rock fragments, ash, and hot gases which knocks down, buries, or burns everything in its path.

Fossil Fishes of the Bear Gulch Limestone The Bear Gulch Limestone (Mississippian of Montana) is what is known as a lagerstätte, a well-bedded sequence of limestone layers containing an extremely well-preserved assemblage of fossils. This deposit has yielded one of the most diverse and well preserved fossil fish assemblages in the world. We have excavated approximately 130 species of fish from this deposit over the last 35 years. The site also contains well preserved arthropods, sponges, starfish, conulariids, worms, and other soft-bodied organisms, as well as brachiopods, bryozoans, and molluscs. The Bear Gulch fossils are so well preserved that they provide a window into the life of the Mississippian that has never been available before. This site is dedicated to bringing you and the fishes of the Mississippian together. The fish of the Bear Gulch Limestone include a lamprey, an acanthodian, over 65 species of "sharks", six coelacanths, a rhizodont, and a host of ray-finned bony fish. Top of page

Virtual Earthquake - An Introduction What's an earthquake? Earthquakes occur because of a sudden release of stored energy. This energy has built up over long periods of time as a result of tectonic forces within the earth. Most earthquakes take place along faults in the upper 25 miles of the earth's surface when one side rapidly moves relative to the other side of the fault. This sudden motion causes shock waves (seismic waves) to radiate from their point of origin called the focus and travel through the earth. It is these seismic waves that can produce ground motion which people call an earthquake. What are earthquake (Seismic) Waves? A seismic wave is simply a means of transferring energy from one spot to another within the earth. The speed of an earthquake wave is not constant but varies with many factors. What's a Seismogram? Note well: This seismogram is a simulation. How is an Earthquake's Epicenter Located?