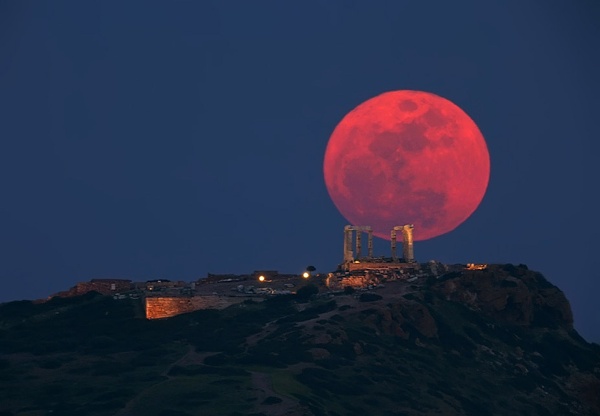 Interactive 3D model of Solar System Planets and Night Sky The Top 5 Astronomical Events to Witness Before You Die | Fun Lists - Top 10 Lists In the age of internet, television, and Lady Gaga, it’s easy to ignore the dazzling displays the sky gives us every night. In ancient times, however, human civilizations based their entire calendar, and thus their way of life, upon what they saw in the cosmos. While humanity’s interest in astronomy has diminished over the centuries, the sky remains nonetheless spectacular. Few people have the time to go stargazing every night, but here are 5 celestial events so awe-inspiring, everyone must see them in their lifetime. 5. Next Occurrence: August 9-14, 2011 Every August, the night sky lights up with a dazzling display known as the Perseid meteor shower. 4. Next Occurrence: June 15, 2011 in Africa Ever get bored with the predictably drab hue of the moon? 3. Occurrence: Year round More commonly known as the Northern Lights, Aurora is a fantastic light display that occurs at extreme Northern or Southern latitudes. 2. 1. Top 10 Amazing Stars in the Universe (toptenz.net) Shortlink:

BrowserQuest Scientists Discover The Oldest, Largest Body Of Water In Existence--In Space Scientists have found the biggest and oldest reservoir of water ever--so large and so old, it’s almost impossible to describe. The water is out in space, a place we used to think of as desolate and desert dry, but it's turning out to be pretty lush. Researchers found a lake of water so large that it could provide each person on Earth an entire planet’s worth of water--20,000 times over. The water is in a cloud around a huge black hole that is in the process of sucking in matter and spraying out energy (such an active black hole is called a quasar), and the waves of energy the black hole releases make water by literally knocking hydrogen and oxygen atoms together. The official NASA news release describes the amount of water as “140 trillion times all the water in the world’s oceans," which isn’t particularly helpful, except if you think about it like this. That one cloud of newly discovered space water vapor could supply 140 trillion planets that are just as wet as Earth is.

Dynamic Optical Illusions - GROW ILLUSION. Stare at the center of the below illusion for about a minute. The longer the better. Then look away and watch you world melt! Try all 8 above for different effects. This optical illusion (now at version 3) has been featured on the new page along with 6 other brand new illusions exclusive to Skytopia. What were you raised by wolves? Bellatrix Orionis - Views from the edge of the Universe | Bellatrix Orionis Strand Superyacht - Two for One (by @baekdal) #design I know what you are thinking. It is devilishly hard to decide whether you should get a new yacht, or just get another super car. Right? A yacht is relaxing, but the car is fun. Isn't there a way to do both? Actually, there is. And it has a top speed of an phenomenal 50 knots. And, it comes with a built-in garage for the "Tender." If that is too small for you, they have also come up with the Strand Craft 166. It is 166 foot long, can retract the flybridge and radar mast for a more streamline style. There are five double en-suite staterooms, each equipped with 52 inch Bang & Olufsen TVs, top of the line sound systems, LED mood lighting and an iPad control and information center. And it is capable of a cruising speed of 30 knots with a top speed of 40 knots. So there you have it. Follow: 42Concepts

Gourmet Gaming The competition has now closed. Thanks to everyone who reblogged and shared Loading’s cause! The winners have been notified. Don’t forget you can still donate and help bring a gaming experience to London! Gourmet Gaming is proud the be part of the Loading Indiegogo campaign! Loading, who are famous for the most inspired gaming cocktails of all time, are looking to open a new gaming bar and café in London and they need your help! Donate today to their Indiegogo, help them raise $50,000 and get amazing rewards for your generosity. Reblog this post to be in with a chance of winning 1 of 25 Ubisoft codes! Expendables XBLA (5) From Dust XBLA (5) Outland XBLA (5) From Dust PSN (5) Mad Riders PSN (5) Winners of the Ubisoft codes will be picked and announced on Thursday 11th October. Guild Wars 2 – Chocolate Omnomberry Cake Click ‘Read More’ for the full recipe! Read More Request: Phoenix Wright: Ace Attorney - Snackoos Quiet, please… It’s snack time! Read More Read More

The Beginning, The End, and all that In Between by sethbernard87 | LOST Theories The epic story of LOST has come to a close. For the past year, this ending was heavy on my mind, as well as the millions of other avid LOST fans around the world. And for all others, our obsession for this show seemed almost comical that we would invest such energy at attempting to dissect each weeks story line. Through polar bears, time-travel, others, other others, and bright yellow lights, the show filtered out only the truest of fans. And it was these fans who grew deeply saddened once the calender hit 2010, because we knew this was the year LOST would justify or smash our long held theories about where our characters were. However, some people, including myself, were nervous for this ending. "Everyone dies sooner or later, kiddo...some died before you, some long after." This side-ways reality was just the place in which one goes after death, before they are able to move on. And that's what's great about this ending.

Pictures of Cats & Wild Animals In Trapped Weird Places So a while back we showed you animals riding other animals . Now we bring you (drum roll, please) Cats & Wild Animals Trapped Weird Places! You never know where an animal is going to show up. Actually, for most of us, that is totally not the case, since we don’t generally let our dogs climb out of second floor windows, and I bet you don’t even know anyone with a buffalo. Elephant trapped in a Hole Some might ask how this elephant got in this hole. Cow stuck in a Pole This one really makes you wish you could hear the thoughts of animals ala Dr. Alligator (or Crocodile?) Man, Avon is really getting desperate for new reps. Boar-ing Kitchen At least they had the foresight to put the trash cans on the counter where the (wild boar?) Buffalo in the Room I’ve heard about the “elephant in the room,” but I guess the elephant is in a hole, so this is the next best thing. Carlisle the Cat the Amazing Contortionist Trapped And for my next trick…. Other Cats in Places Guess it’s time to turn the heat down.

DIY Succulent Pallet Table | Far Out Flora Max with the new Succulent Table. Can you believe that our latest DIY project was once just a couple of junky pallets and some scrappy table legs? Crazy…if I didn’t have photos, I wouldn’t believe it myself. Not too long ago, we whipped out a coffee table sized succulent table out of an old shipping crate. The pallets. First bit of advice, deconstructing pallets are a big pain unless you have the right tools…and our hammer and wall scrapper wasn’t quite doing the trick. Couple good planks. Love the scares of time left on these chunks of pallet wood. Attaching the legs. After pulling apart two pallets, we used the 2 x 4 sized boards to make a rectangular frame to attached the appropriated table legs. Dry run for fittings. Like TV magic (and 2 days later), the table was more or less put together. Megan with some semps. After a weekend of slivers and sweat, we finally got to plant this baby. Getting messy. Packing them in. Yeah, we didn’t hold back on jamming them. Succulents playing together.

Ensign Software - ESPL: Dances of the Planets The planets in the heavens move in exquisite orbital patterns, dancing to the Music of the Cosmos. There is more mathematical and geometric harmony than we realize. The idea for this article is from a book Larry Pesavento shared with me. The book, 'A Little Book of Coincidence' by John Martineau, illustrates the orbital patterns and several of their geometrical relationships. . Take the orbits of any two planets and draw a line between the two planet positions every few days. Earth: 8 years * 365.256 days/year = 2,922.05 days Venus: 13 years * 224.701 days/year = 2,921.11 days (ie. 99.9%) Watching the Earth-Venus dance for eight years creates this beautiful five-petal flower with the Sun at the center. (5 is another Fibonacci number.) Another intriguing fact is the ratio between the Earth's outer orbit and Venus's inner orbit is given by a square. In the following dance patterns, the planet pairing is given and the number of orbits of the outer planet. Article by Howard Arrington