How NASA might build its very first warp drive 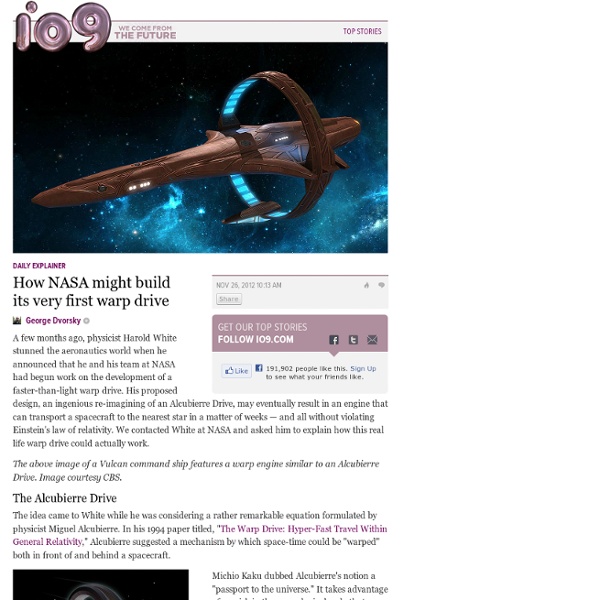 I want to see this work as much as anyone else on io9, but every time I read an article on warp drive, I expend so much mental energy trying to wrap my head around the concept that my entire left hand side goes numb. Somewhere along the line my understanding of concepts such as the nature of Spacetime is deficient. Here's the problem. When I think about the idea of expanding the conceptual framework that describes the continuum between two abstract concepts, behind a spaceship, whilst contracting the conceptual framework that describes the continuum between two abstract concepts, in front of a spaceship; all I can think of is that this like saying that when in conversation with another person, I can reach out with my hand, grasp hold of the words that are coming out of that other persons mouth and fold them in half. If someone could point me towards some legible books that I could buy that would help me understand where my understanding has gone wrong, I would be grateful. Thanks.

Jakarta, Indonesia's megacity of 10 million, is under water (+video) Flooding brought one of Asia’s megacities to a halt on Thursday, as monsoon rainwater in the central business district reached a foot and a half, and almost 10-feet in other parts of the city. Skip to next paragraph Subscribe Today to the Monitor Click Here for your FREE 30 DAYS ofThe Christian Science MonitorWeekly Digital Edition By today, flood-related incidents killed at least 12 people, and close to 20,000 have been evacuated. Why The Human Body Will Be The Next Computer Interface By now you’ve probably heard a lot about wearables, living services, the Internet of Things, and smart materials. As designers working in these realms, we’ve begun to think about even weirder and wilder things, envisioning a future where evolved technology is embedded inside our digestive tracts, sense organs, blood vessels, and even our cells. As a service design consultancy we focus on how the systems and services work, rather than on static products. We investigate hypothetical futures through scenarios that involve production/distribution chains and how people will use advanced technology.

The SECRET for Undetectable Mind Control Unless you understand how reality is manifested, your destiny and the destiny of the planet will be in the hands of the ruling elite who do understand it. “Sometimes people don't want to hear the truth, because they don't want their illusions destroyed.” -Friedrich Nietzsche Best U.S. Job: Become a Farmer to Make More than a Banker If you want to become rich, Jim Rogers, investment whiz, best-selling author and one of Wall Street's towering personalities, has this advice: Become a farmer. Food prices have been high recently. Some have questioned how long that can continue. Not Rogers. He predicts that farming incomes will rise dramatically in the next few decades, faster than those in most other industries — even Wall Street. The essence of his argument is this: We don't need more bankers.

gov News Transcript: DoD News Briefing: Secretary of Defense William S. Cohen Cohen's keynote address at the Conference on Terrorism, Weapons of Mass Destruction, and U.S. Strategy at the Georgia Center, Mahler Auditorium, University of Georgia, Athens, Ga. The event is part of the Sam Nunn Policy Forum being hosted by the University of Georgia. Secretary Cohen is joined by Sen. Sam Nunn and Sen. Richard G. Ecuador Taxes Bankers, President Faces CIA Assassination Plot Ecuadorian President Rafael Correa’s government has recently passed a law to raise taxes on the financial sector to help raise the standard of living for the poor. President Correa, an economist who is running for re-election, has reduced poverty and increased the overall standard of living in Ecuador during his term. Understandably, the big banks, some of whom were bailed out, oppose Correa. In fact, his primary contender for the presidency is an entrenched banker. But Correa may face a more dangerous opponent than his political rival.

Wi-Fi signals enable gesture recognition throughout entire home (w/ Video) (Phys.org) —Forget to turn off the lights before leaving the apartment? No problem. Just raise your hand, finger-swipe the air, and your lights will power down. Want to change the song playing on your music system in the other room? Move your hand to the right and flip through the songs. University of Washington computer scientists have developed gesture-recognition technology that brings this a step closer to reality. 'Frozen waves' of blue ice photographed by Tony Travouillon Dramatic images appear to show a frozen wave but the phenomenon is actually caused by compressed iceThe ice appears blue because it absorbs light from the 'red end' of the spectrum and throws out the blue light By Rik Sharma Published: 13:18 GMT, 26 November 2012 | Updated: 19:07 GMT, 26 November 2012 At first glance these beautiful images from the Antarctic appear to show 50-ft tall waves that have been instantly frozen as they break.

Equality Under the Law In failing to give due consideration to the proper role of government, both our nation and our state are sliding down the proverbial slope towards what? Less prosperity, lower productivity, higher unemployment, losses of freedom, insurmountable public burdens of debt just to name a few of the maladies associated with impoverished society and to which we are precipitously headed. A prime example of this failure was highlighted in this past Sunday’s New York Times , “ Lines Blur as Texas Gives Industries a Bonanza ” which was originally captioned, “Texas Business Incentives Highest in Nation.”